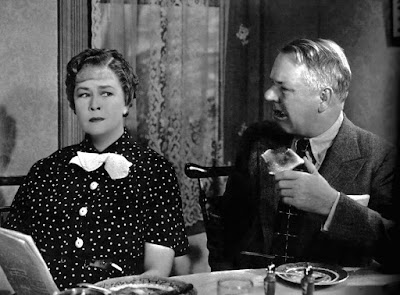 Kathleen Howard struggles to conceal her disgust at husband Ambrose Wolfinger (W.C. Fields) talking with his mouth full in this inspired Paramount comedy from dear old "Charles Bogle's" best period. Like Harold Bissonette in the previous year's It's A Gift (who was also married to a Howard moaner), Wolfinger is another of Fields' stoical family men, a breadwinner who has been forced to survive on cold toast for eight years because of the greed and selfishness of the ungrateful in-laws he's been doing his best to support. The last laugh is most assuredly his, of course.

I've written fairly extensively about The Great Man before so there's no need to dwell on his back story too much here. Instead, let's just stand back and admire the brilliance of one of his very finest films. Man On The Flying Trapeze, essentially a remake of his 1927 silent feature Running Wild, benefits from the simplicity of its premise, that Fields' unassuming office file clerk and "memory expert" wants to take his first afternoon off work in 25 years to see a wrestling match, a championship bout between Tosoff, the Russian Behemoth (played by Swedish beast Tor Johnson, later a star of Ed Wood's infamous Z-movies) and Hookallockah Meshobbab, the Persian Giant. Ambrose's boss Mr Malloy (Oscar Apfel, returning from 1934's The Old Fashioned Way) isn't too keen on the idea so Wolfinger is forced to volunteer the lie that his hated, shrewish mother-in-law Cordelia (Vera Lewis) has recently passed away from alcohol poisoning. However, with his ticket for the match swiped by work shy brother-in-law Claude Neselrode (Grady Sutton, Ogg Oggilby from The Bank Dick, 1940) and the premature memorial wreaths stacking up at home, the poor devil's going to have to come up with something pretty special to win the day and appease his bossy wife Leona (Howard), the sort of woman who delights in reading aloud "Gertrude Smodden" editorials from the newspaper. 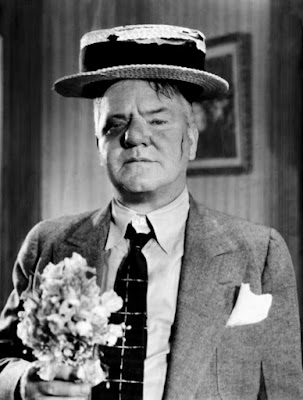 The highlights here are many. Arguably the stand-out is the opening sally in which Fields takes a nip in the bathroom while he's supposed to be brushing his teeth, performs a laborious blowing-and-rolling ritual with his socks (twice) before taking up arms and venturing down to the basement to apprehend two burglars supping on his homebrewed applejack and instead joining them in a sentimental croon, along with the equally sozzled cop they are handcuffed to. Fields caterwauling along with these two hoodlums (played by future cowboy character actor Walter Brennan and Fields regular Tammany Young) to 'On The Banks Of The Wabash' is a real moment of brotherly fellowship and just too funny for words. His manic chase downhill and onto the railroad tracks in pursuit of an escaped spare tire is also splendid as is Wolfinger's surprisingly violent final confrontation with Claude and Cordelia - knocking the former out cold and chasing the latter away with a wild swing that only narrowly misses. However, as always, our man has plenty to say about the human condition as well, depicting a cruel world populated by ghastly relatives, sycophantic superiors (Lucien Littlefield's fastidious Mr Peabody is especially memorable) and patronising traffic cops. It's genuinely affecting to see Ambrose cross the threshold to his own home sporting a black eye and a nosegay of wilting flowers ("Things happened...") and the only source of solace and relief in this man's dreary and unhappy existence is a quiet drink and the love of his doughty daughter (Mary Brian) from an earlier marriage - tellingly christened Hope. It is she who clears his name and wins him back his job with a stellar raise and she who most deserves her place in the front of his new car as the credits role while Claude and Cordelia cower in the rumble seat, drenched by a sudden rain storm to the driver's beaming satisfaction. 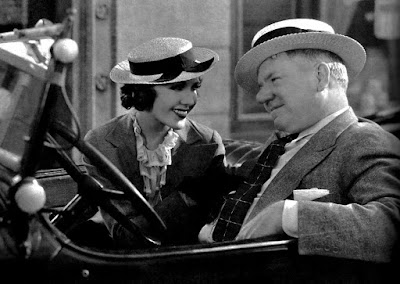 Aspects of Man On The Flying Trapeze are thought to be autobiographical - Fields' own estranged son was named Claude, he himself really did have a photographic memory (he read precociously and was able to recall lengthy passages from hefty tomes in detail) while his on-screen secretary is played by Carlotta Monti, the comedian's long-term mistress. These are mere details and dalliances, however. Our man deals in universal truths. "It's hard to lose your mother-in-law. Almost impossible..."
Posted by Joe at 21:02