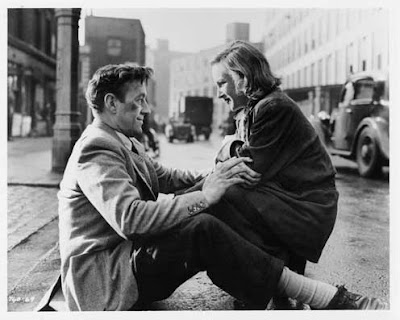 Alec Guinness always said that this inspired manufacturing industry satire from director Alexander Mackendrick was his personal favourite among the Ealing pictures in which he appeared. Reunited with Joan Greenwood (and, briefly, Miles Malleson) from their triumph in Robert Hamer’s Kind Hearts & Coronets (1949), Guinness is endearingly childlike here as mad scientist Sidney Stratton, a niave but brilliant chemist who secretly develops a luminous, indestructible fabric while working as a lab technician at a Lancashire textile mill. When the factory's boss Mr Birnley (Cecil Parker) learns of Stratton's combustible but potentially lucrative invention, he is keen to press on with its mass production, only for his rivals to round on him and point out that such a move would destroy their entire business as consumers would never require more than one suit of clothes in a lifetime. When the plant's trade union members learn of Stratton's miracle material, they too rise up and the poor fellow is unceremoniously imprisoned and then chased through the streets as both capital and labour unite to try and suppress his creation. 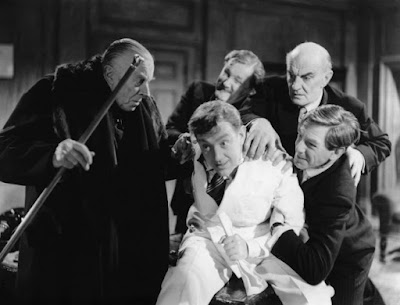 Perhaps not the funniest of Ealing's capers but arguably the studio's weightiest and most thought-provoking script (from an unproduced play by Mackendrick's cousin, Roger MacDougall), The Man In The White Suit serves as an allegory for the restriction of scientific progress under a conservative capitalist hierarchy. However, Stratton's resilient and dirt-resistant cloth (barring instabilities in its structure) would certainly have put millions out of work had it been embraced - a detail that makes it as destructive a prospect as the A-bomb and which makes the film more relevant today than ever as we find ourselves shufflingly unthinkingly into a digital economy founded on self-service supermarket checkouts, eReaders and mass unemployment. "Why can't you scientists leave things alone? What about my bit of washing, when there's no washing to do?" What indeed.

Greenwood is as sexy as ever as the plucky daughter of Parker's compromised local industrialist, Vida Hope is utterly authentic as a strident socialist, Ernest Thesiger is hilarious as a sickly, ghoulish tycoon (very much a proto-Mr Burns) and there's an early part for Michael Gough (best known to modern audiences for his recurring role as Alfred Pennyworth in the pre-Christopher Nolan Batman films, 1989-1997). Guinness and Parker, meanwhile, would team up with Mackendrick one final time for The Ladykillers (1955) before the Scot packed his bags for America and the mighty Sweet Smell Of Success (1957). Critic Charles Barr divided Michael Balcon's directors into the categories "mainstream" and "maverick" in his 1977 study Ealing Studios, singling out Mackendrick and Robert Hamer for the latter label. Its an apt description of two men whose work was more cynical, irreverent and morally complex than the liberal but safe output of Charles Crichton, Charles Frend and Basil Dearden. The Man In The White Suit is as fine an example of a "maverick" Ealing production as you could wish for.
Posted by Joe at 14:53