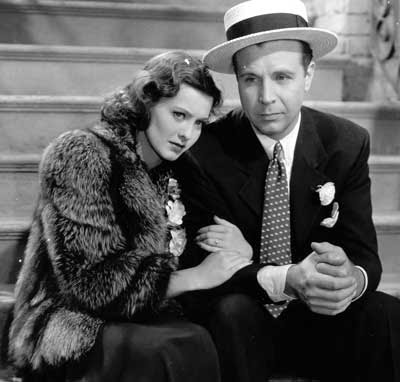 A little more Dick Powell for you in Preston Sturges' underrated follow-up to the same year's The Great McGinty, based on a never-produced play the writer-director had drafted in 1931, A Cup Of Coffee. It may not actually have anything to do with Christmas but, hey, so sue me.
A real product of the Great Depression - think My Man Godfrey (1936) - Sturges' satire on consumer-capitalism concerns Jimmy MacDonald (Powell), a poor but earnest young clerk at New York's Baxter Coffee Company who enters a contest to compose the new slogan for rival firm Maxford House Coffee ("If you can't sleep, it isn't the coffee. It's the bunk"). Taking advantage of a delay in the announcement of the winner (William Demarest's Mr Bildocker causes it by anticipating 12 Angry Men (1957) and refusing to side with the majority vote, driving his fellow executives, including Robert Warwick and Jimmy Conlin, to distraction with his stubbornness), three of Jimmy's colleagues decide to play a prank on him by writing a phoney telegram in which he is declared the lucky recipient of the $25,000 first prize. When Jimmy's boss (Ernest Truex) gets wind of this triumph, he decides to hand the lad a promotion to the advertising department, where Jimmy immediately impresses. Having picked up his cheque from an unquestioning Dr Maxford (Raymond Walburn), Jimmy and his loving girlfriend (Ellen Drew) proceed to hit the stores to buy a wedding ring, a high-tech davenport for his mother and gifts for everyone on the block. However, when the truth is discovered, all hell breaks loose and a fish fight erupts between Jimmy's neighbours and the department store creditors trying to retrieve their goods, leaving the naive victim disillusioned and debt-ridden. Until...
There's some real pathos on show here in the desperate dreams of Sturges' protagonist of hitting the jackpot and selflessly delivering those around him from the poverty and desperation that has blighted their lives. Powell and Drew make for an adorable couple and her impassioned speech to save his job is a truly touching moment, as is the scene in which the trio of contrite jokers bring the MacDonalds a replacement couch for their pains. This is a fable as timeless as they come and as relevant now as when it was penned but, as a spoof of modern business culture, the hollow pursuit of material wealth and the illusory nature of success, Christmas In July is perhaps not as biting as it might have been. Still, Mr Baxter's rationale for thinking less of Jimmy when he learns he hasn't really won the competition has an enjoyably crooked logic - without the quantifiable endorsement of others, his ideas have no capital and are thus to all intents and purposes worthless, no matter how fine they may have seemed at first ("I didn't hang on to my father's money by backing my own judgement, you know"). There are also some splendid character turns to enjoy here, from the likes of Truex, an animated Walburn, Franklin Pangborn as a frazzled radio personality and Alan Bridge as an eccentric jewelry salesman. Not Strurges' finest but rather lovely all the same.
Posted by Joe at 19:45