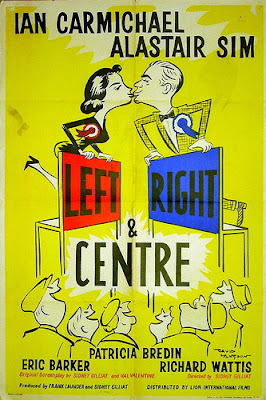 With George Clooney's The Ides Of March (2011) currently whipping up Oscar buzz, here's another film from the campaign trail with which it almost certainly has nothing in common. This rather sweet-natured comedy from prolific British Lion director-producer team Frank Launder and Sidney Gilliat again stars the redoubtable Ian Carmichael as TV panel show personality Robert Wilcot, star of teatime quiz 'What On Earth Was That?', who agrees to stand as Conservative candidate for the fictional constituency of Earndale in a parliamentary by-election. Wilcot soon becomes disillusioned with the contest when he realises he was only put forward for the nomination by his gleefully avaricious uncle Lord Wilcot (Alastair Sim) in order to ensure publicity for the family's stately home, which the latter has recently opened to the public and converted into a tourist attraction, filling the grounds with funfair rides, a nudist camp and peep show slot machines promising to reveal 'What Ye Jester Saw' and 'Sex in 3D' (which, brilliantly, is out of order, presumably from overuse). Robert's electioneering is further complicated when he finds himself falling helplessly in love with rival Labour candidate Stella Stoker (Patricia Bredin), the Socialist daughter of a Billingsgate fishmonger, much to the annoyance and disbelief of the pair's respective campaign managers (Richard Wattis and Eric Barker), who subsequently join forces to try to fend off the inevitable.

"You'll howl when sex and politics collide head on!" insisted the film's original tagline but actually Left Right & Centre rather abandons the pointed political satire it punts for early on in favour of standard romantic comedy plot contrivances - misunderstandings engineered by self-interested outsiders, confrontations with jealous partners etc. Launder and Gilliat's film opens with a pleasingly ironic narration stating that "every nation, they say, gets the government it deserves" and outlining the key ideological difference between the British right and left accordingly: "Whereas the Conservative philosophy is the exploitation of man by man, with the Socialists it is exactly the other way round". This is followed by a rousing ode to the British electorate in praise of our keen awareness of the important social issues of the day and proud sense of fair play, deftly undermined by images of crowds betting on horse races, jeering at referees and chasing after girls. Left Right & Centre is good on media manipulation - two local rags take entirely opposing angles on a photograph of Wilcot chivalrously carrying Stoker's luggage at Earndale station - and Sim's Lord Wilcot does get to hand his young nephew this astonishing piece of wisdom: "We are all governed by dead ideas but, when it comes to political programmes, an idea has not merely to be dead but to have lost all meaning before it has any chance of being adopted with real enthusiasm." Bold stuff but instead of more in this vein, which could have led to a post-war, pre-Wilson answer to The Thick Of It (2005-), we end up with a harmless and somewhat messy trifle though the result remains a pleasant confection.

Carmichael and Bredin make for a charming item and prove themselves more than game when it comes to fighting it out at the hustings but the premise is pretty unlikely in the first place and, as always when his name appears on the cast list, it's Sim who steals the show here as the delightfully cynical, mercenary and meddling aristocrat, an opportunist far more interested in flogging homemade parsnip wine ("It puts the 'nip' in parsnip!") and counting his day's takings than the competition's outcome. Our man never looks happier than when he's spotted riding around town on the roof of a campaign truck smoking a fat cigar and promoting the paid-entry after-party he's hosting at Wilcot Priory on election night, regardless of the result. His oddly matter-of-fact death at the film's close - killed falling from a step ladder - at least provides one final piece of mischief: despite winning the election, Robert has inherited a peerage by dint of his relative's sudden demise and is thus ineligible to sit in the House of Commons anyway, meaning that the whole business is void and must begin again from scratch. Professional campaigners Wattis and Barker, of different class but otherwise cut from very similar cloth indeed (tellingly, both men share a taste for champagne), are left flabbergasted and squabbling on the pavement as the credits roll but you can't help but sense their exhilaration. This is, after all, what these creatures live for. 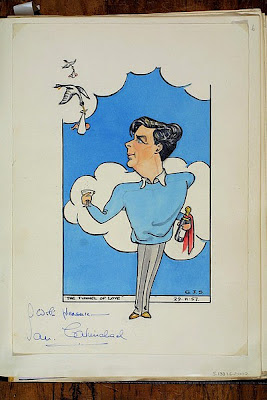 P.S. Here's a nice caricature of Carmichael, that perennial underdog, from 1957, drawn by my great uncle Gilbert Sommerlad, whom I've written about before here. Carmichael was appearing in The Tunnel Of Love by Joseph Fields and Peter De Vries at the Oxford New Theatre at the time this sketch was completed.
Posted by Joe at 17:33