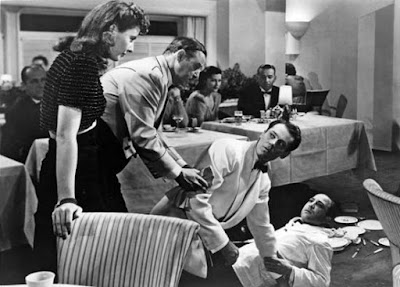 Henry Fonda's clumsy snake-spotter and brewery heir Charles "Hopsie" Pike falls for Barbara Stanwyck's manipulative card sharp Jean Harrington (taking out a waiter in the process) aboard an ocean liner from South America in Preston Sturges' excellent screwball comedy. Rather like Cary Grant's Dr. Huxley in Bringing Up Baby (1938), Pike is a bookish, retiring academic type caught up in the affairs of a female whirlwind, this time the manipulative Harrington, in league with her professional gambler father (Charles Coburn) to swindle the rich and stupid at the card table, who accidentally finds herself in love with Charles for real. However, when he uncovers the truth about her choice of career, the befuddled ophiologist storms home to his family's country retreat in Connecticut, heartbroken. She follows him, angered by the snub, posing as a member of the English aristocracy named Lady Eve Sidwich and eventually marries poor, confused Charlie after convincing him that she is in fact Jean's twin. 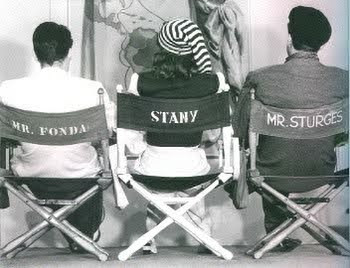 Here's a very fine moment early on in which the seduction truly begins. Stanwyck is sensational throughout and again uses her shapely ankles to entrap a man, just as she would in Double Indemnity (1944). Fonda's naive Adam is here rendered entirely helpless and would almost certainly say yes to any suggestion she'd care to make, prohibited apples or otherwise.


Paramount's The Lady Eve was based on a short story by Monckton Hoffe entitled 'Two Bad Hats', which was very nearly its title and Joel McCrea, Fred MacMurray, Madeleine Carroll and Paulette Goddard were all slated to star at various stages of pre-production. As delightful as those performers are, Fonda and Stanwyck make for a strong pairing and, as is so often the case with Sturges, the supporting cast are a real highlight. The director had an extraordinary gift for finding the right people and giving them funny things to do, like having the oinking Eugene Palette sing and clang steel cloches together as he becomes increasingly impatient for his overdue breakfast. Or having William Demarest as Pike's suspicious minder Ambrose "Muggsy" Murgatroyd creep past the dining room windows spying on Lady Eve in silhouette before tumbling head first into a flowerbed. Or having Fred and Ginger regular Eric Blore dressed up like The Penguin, complete with monocle and top hat, roaming the country club set posing as a knight of the realm in deliciously villainous style. You can see why the Coen Brothers admire Sturges so much. His slogan for Pike's Ale ("The Ale That Won For Yale") could have come from the same marketing department that cooked up Dapper Dan's pomade.
Posted by Joe at 10:06