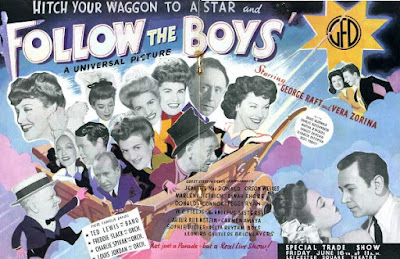 Raft stars as vaudeville clown turned Hollywood musical star Tony West who takes it upon himself to organise entertainment for serving US troops following the bombing of Pearl Harbour by the Japanese. Alienating his pregnant wife and co-star (Vera Zorvina) in the process, West tours the country's army camps with such luminaries as Welles, Dietrich, Fields, Rubinstein, Joan Blondell, Dinah Shore, Sophie Tucker, Carmen Amaya, Andy Devine, Nigel Bruce, Donald O'Connor and Peggy Ryan plus band leaders Louis Jordan, Freddie Slack and Charlie Spivak and a good time is had by all.

Welles and Dietrich's magic turn is a definite highlight of this back-slapping Universal variety ensemble, but so is Fields' boozy pool routine (an echo from 1934's Six Of A Kind) and Jordan's lovely rendition of 'Is You Is Or Is You Ain't My Baby?' for an audience of black servicemen from the back of a flatbed truck in the rain. The cruel-looking Raft can certainly bust a move when he wants to and makes for a determined lead in this worthiest of patriotic tribute films but the narrative about his neglected home life, which is used to tie everything together, seems oddly overdone. The decision to kill him off at the end when a Japanese sub torpedoes a navy carrier with the Andrews Sisters on board in mid-song is a particularly heavy-handed touch. We get it. The guy's a hero. All the stars who gave up their time acted commendably (though in publicity terms, it has to be said, they had little choice) but somehow you can't help feeling that the soldiers themselves are being forgotten here amidst all the self-congratulation. There are no real characters among the men and women in uniform and no alternative voice. As such, Follow The Boys from director Eddie Sutherland and producer Charles K. Feldman stands as an uncomplicated record of this peculiar footnote to showbiz history. It's unabashed propaganda but none the less interesting for that.
Posted by Joe at 10:40