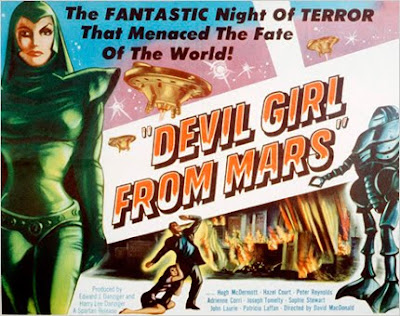 This charming British B sci-fi concerns the crash landing of a Martian spaceship in the Scottish highlands. The UFO's pilot, a leather-clad dominatrix named Nyah (Patricia Laffan), turns up at the nearest pub, the Bonnie Charlie, in which a gaggle of representative types have gathered for the evening, and explains that she is on a mission to capture earth men to take back to the red planet in order to breed with its womenfolk, who have just eviscerated the last of their male counterparts following a civil war between the genders and are thus without a means of propagating their species. A quite literal battle of the sexes, you might say. Surprisingly, the normally red-blooded Scots are quite against the idea of becoming interplanetary sex slaves and plot to blow-up Nyah's spacecraft instead.

Despite its horny schoolboy's fantasy of a premise and splendid title, there are long stretches of Devil Girl From Mars that are dreadfully dull while the acting on show is of a decidedly mixed bag. Perhaps only the mesmeric and winningly serious Laffan and the wild-eyed, future Dad's Army star John Laurie stand out, although there's some credible, grounded support from Sophie Stewart and Hazel Court as no-nonsense hostess Mrs Jamieson and her incongruous fashion model guest, respectively. Director David MacDonald's special effects are above average for a film with such an obviously small budget but it has to be said that Nyah's tree-zapping robot subordinate Chani does resemble a waddling fridge-freezer. A very poor relation to Gort from The Day The Earth Stood Still (1951). What is arguably most surprising about Devil Girl From Mars, however, is that it was reportedly based on a play. Written by James Eastwood and John C. Maher, who adapted it for the screen, this little opus is extremely hard to find anything out about and it's hard to believe it was ever staged. If anyone out there has the skinny I'd dearly love to know more.
Posted by Joe at 17:05