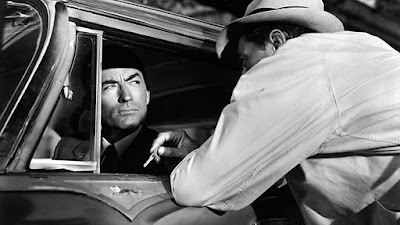 Gregory Peck raises a formidable eyebrow at a meddlesome Robert Mitchum in J. Lee Thompson's classic thriller about a Georgia attorney stalked and terrorised by an ex-con he helped put away eight years previously. Thompson's film was based on John D. MacDonald’s 1957 novel The Executioners and the director brought together some natural casting choices for the job. Peck, Mr Integrity, would play his signature role, Atticus Finch (another lawyer), that same year in To Kill A Mocking Bird while ageing tough guy Mitchum had already played a psychotic pursuer in Charles Laughton’s brilliant, expressionistic The Night Of The Hunter (1955). Similarly, Martin Balsam was fresh off Psycho (1960), where he met a grizzly end as Detective Arbogast, so was a shoe-in for Cape Fear’s voice of law and order, Sergeant Dutton. All are great – as are Polly Bergen, Lori Martin and Telly Salvalas in support - but it’s Mitchum’s performance as vicious rapist Max Cady that keeps us fascinated. Squinting out at Peck’s Sam Bowden from beneath his Panama hat, a cigar jutting contemptuously from his alligator grin, the man oozes menacing insouciance, an American Nightmare invading a cosy middle-class idyll in a similar vein to Joseph Cotten’s Uncle Charlie in Shadow Of A Doubt (1943). Cady clearly enjoys watching his prey squirm on the hook. So much so, in fact, that you start to wonder whether his actually going through with the killing of Bowden and his family wouldn’t rob him of his sole raison d’être. His disturbed sexual interest in Bowden’s young daughter (Martin) remains shocking to this day and Thompson’s film – often parodied, most notably in The Simpsons – still looks beautiful, its cool black-and-white cinematography accentuated in recent high definition releases. Perhaps its biggest selling point, however, is composer Bernard Herrmann’s unforgettable score, as tense and tied to the action in its way as John Williams’ for Jaws (1975). 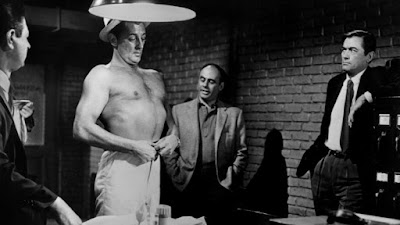 Mitchum, Balsam and Peck (above) all returned for cameos in Martin Scorsese’s really rather unnecessary remake of this three little pigs tale in 1991, starring Robert De Niro and Nick Nolte in the leads with Jessica Lange and Juliette Lewis providing support. Herrmann’s theme was also recycled from the original, albeit rearranged by Elmer Bernstein, though screenwriter Wesley Strick did beef up Cady's motive for pursuing Sam Bowden, the latter having suppressed evidence that might have seen the defendant receive a reduced sentence in this version – a fatal act of moral judgement on Bowden’s part stemming from his certainty over Cady’s guilt. This certainly helps muddy the waters but you should stick with the original anyway - De Niro's tattooed Appalachian religious nut soons becomes a hysterical caricature and operatic silliness ensues, particularly in Scorsese's overblown houseboat dénouement.

Bernard Herrmann - Theme From Cape Fear
Posted by Joe at 15:06