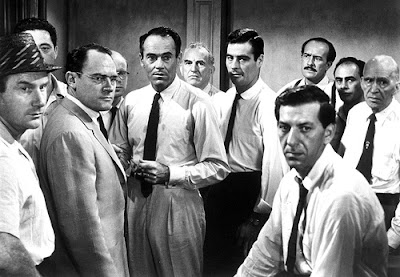 Sidney Lumet’s enduring legal drama 12 Angry Men is an undeniably worthy piece of work – it almost feels like a public information film at times – and perhaps not as cool as Otto Preminger's Anatomy Of A Murder (1959) but it's also a perfectly argued and optimistic defence of democratic values and the American criminal justice system. The film is all the more astonishing for the formal constraints Reginald Rose’s script imposes upon itself, making use of just one set – the stifling jury room of the Supreme Court Building in New York’s Foley Square – and taking place in real-time with no action to speak of, just the titular dozen sweating out their deliberations and picking over the evidence in minute detail. It’s a truly amazing feat of writing, acting and directing from all concerned that still manages to keep audiences hooked over half a century later.

If you’ve never seen 12 Angry Men, the film concerns the trial of an impoverished Hispanic youth charged with murdering his own father in New York City. When the jury retires to consider its verdict, 11 members instinctively vote guilty in an initial straw poll. The only dissenter is Henry Fonda’s unnamed bleeding heart liberal who happens to feel that a man’s life is at least worth a conversation and has no time for complacent assumptions. Fonda’s architect assesses the all white, male (and politically representative) faces before him and seeks to persuade and debate his way to an alliance between those among his fellow jurors who are naturally sympathetic to his moderate, left-leaning point of view and those self-made conservative reactionaries in opposition, typified by hateful, perspiring Lee J. Cobb and a racist Ed Begley. Fonda asks his fellow jurymen to reconsider key passages of testimony and aspects of the circumstantial evidence before them and realises in the process that convincing Wall Street stockbroker E.G. Marshall - an enlightened corporate capitalist and early neo-con but, crucially, a man of reason - is the key to ensuring an acquittal for a boy whose guilt no one can honestly be sure of.

Ultimately Lumet’s film champions universal humanitarianism, reasoned argument and dispassionate group decision-making in pursuit of consensus rather than the deeply ambiguous notions of common sense justice and black-and-white moral certainty. 12 Angry Men also asks whether any criminal case is ever truly free from reasonable doubt and invites us to revisit the very concepts of “truth” and “fact”, arguing that all perceived reality is subjective and a matter of interpretation, susceptible to influence by prejudice, bias and narcissism. At one point a frustrated Begley shouts, “I’m sick of the facts – you can twist ‘em any way you like!” and in so doing a profound philosophical point is made in an accessible, box office-friendly manner. A real public service of a film.

Although Fonda, civilising the land just as he did in My Darling Clementine (1946), is undoubtedly the star here (he also served as producer), there are no weak links in the cast, with some strong turns on show from Cobb, Begley, Marshall, foreman Martin Balsam and a meek John Fieldler (the voice of Piglet in Disney's Winnie the Pooh franchise). Jack Warden is especially memorable as intellectually lazy, wisecracking baseball fan, as is Robert Webber as a crass Madison Avenue man. Balsam and Warden would, incidentally, be reunited in the editorial offices of The Washington Post for another American cinematic monument, All The President's Men, in 1976. You can watch 12 Angry Men in full here and, frankly, it would be a crime not to.

P.S. Fans of period British comedy should check out the following episode of BBC sitcom Hancock's Half Hour from 1959, in which comedian Tony Hancock and sidekick Sid James find themselves re-enacting Lumet's film when they are called up to serve as jurors on a robbery trial at the Old Bailey. A neat and affectionate skewering of the source.
Posted by Joe at 21:23