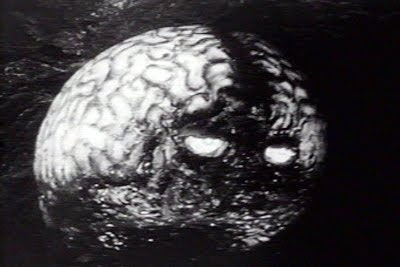 Er, yep. That's the titular brain all right and pretty impressive it is too. Or at least it is until the climax of Nathan Juran's splendid Atomic Age B picture, when the hero whose body the offending cerebrum has previously taken possession of hacks away at its "Fissure of Rolando" with an axe and you realise that it's just a helium balloon bobbing around with lights attached. Still, a fine effort for such a low-budget production.

Juran's film concerns the visit to earth of the eponymous brain, an evil, echoey-voiced fugitive named Gor hiding out in California and hell bent on world domination. A bit like Mel Gibson. Attracted by the high levels of radiation being picked up on his Geiger counter, nuclear scientist Steve March (John Agar) visits the desert caves of "Mystery Mountain" - where else? - with his flippant partner Dan (Robert Fuller), who is promptly eviscerated by the floating alien intellect. Steve survives but Gor elects to use his body as a vessel while he goes about his plan of enslaving all humanity. Returning to Steve's devoted little fiancée Sally (Joyce Meadows), Gor-as-Steve paws her hungrily until the family dog George is forced to intervene to keep things decent. Sally is shocked by her man's uncharacteristic display of heated sexual aggression and becomes concerned about Dan's disappearance. Meanwhile Gor is busy using Steve's professional influence to score a meeting with the government's Atomic Energy Commission, wherein he demonstrates his awesome ability to blow up aeroplanes and buildings with nothing more than a frantic wiggle of his eyebrows. Things are beginning to look pretty black for planet earth, until a second remarkably similar-looking brain named Vol arrives in pursuit of Gor and agrees to possess George, the aforementioned canine, so that he can observe his prey at close quarters and ultimately thwart Gor's fiendish apocalyptic masterplan. Vol turns out to be oddly ineffectual, as it happens, and a great deal of nonsense ensues.

Juran was a Romanian immigrant who began working in Hollywood in 1937 when he joined RKO's art department, going on to win an Oscar for Best Art Direction in 1941 for his work on John Ford's How Green Was My Valley. He directed a number of cheapo genre pictures between 1952 and 1973, reaching his creative peak - well, sort of - in the late fifties with Attack Of The 50 Foot Woman and The Seventh Voyage Of Sinbad (both 1958). Juran's direction here is appropriately unspectacular for a man who considered himself a "technician" rather than an artist but does show occasional flashes of brilliance, as when he shoots Agar's tormented, contorted expression through a glass water cooler, distorting his face and making him all the more monstrous. Genre stalwart Agar is also excellent though it has to be said that he's not especially menacing at the best of times and looks damn foolish in a pith helmet and sweat patches. However, Agar does deserve bonus points for soldiering on manfully in tinfoil contact lenses. Those babies really must have chafed something awful. 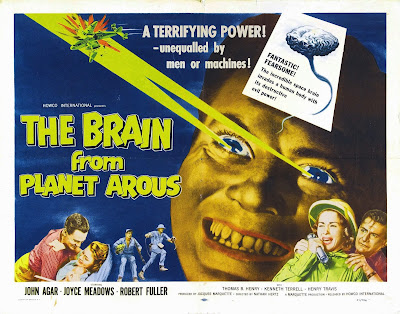 As with many B-movies of the period, it's hard to ignore the unintentionally hilarious, matter-of-fact period sexism on show. Meadows is lovely as Steve's concerned other half and plays her role with more conviction than The Brain From Planet Arous deserves. However, her Sally is nevertheless primarily concerned with feeding the men around her - charred hamburgers are a speciality - and washing dishes and is routinely patronised by the menfolk, even her doting dad. For me though, it's Gor's insatiable lust for her that represents the film's stand-out detail, hands down. This peculiarly earthy and sinister pronouncement from the supposed intergalactic polymath in conversation with Steve really had me in stitches: "I chose your body very carefully. Even before I knew about Sally. A very exciting female!... She appeals to me. There are some aspects of the life of an earth savage that are exciting and rewarding. Things that are missed by the brains on my planet Arous... Even I must have some interest to stir me up. She'll do very nicely". This kind of extraterrestrial lusting recalls the romantic travails of Phil Tucker's Robot Monster (1953), with which Juran's film's shares its Bronson Canyon shooting location. Both are, needless to say, highly recommended if you like this sort of amiable faff.
Posted by Joe at 17:28