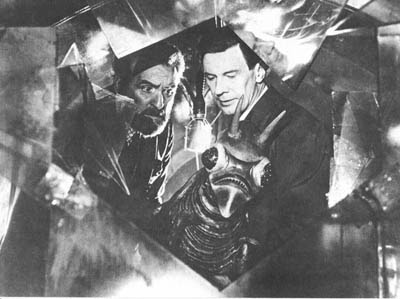 Following the ressurection of the Hammer horror brand in 2007, the creaking old British production house has at last begun churning out new films again, the best of which so far is undoubtedly Irish supernatural chiller Wake Wood (2011) starring Aiden Gillen. However, Hammer is also in the process of revisiting its back catalogue, restoring and re-launching some of its biggest titles on Blu-ray. First out of the traps, ahead even of The Curse Of Frankenstein (1957) and Dracula (1958), is this eerie and profound sci-fi oddity from director Roy Ward Baker and television genre pioneer Nigel Kneale, about the discovery of a series of ape skulls and a Martian spacecraft buried in the clay beneath a London tube station. Amazing what you find lying under our nation's capital (see also Passport To Pimlico, 1949, in which the unearthing of some forgotten treasure belonging to the last Duke of Burgundy leads to a startling revelation).

Hammer had already made two Quatermass films prior to this one, both of which, like Quatermass & The Pit, were remakes of earlier BBC television series. This time, however, Baker took over the reins from Val Guest and stern Scot Andrew Keir inherited the title role from American actor Brian Donlevy, delivering a committed, emotional and admirably serious performance that serves to anchor the film and rescues proceedings from camp tongue-in-cheekery. James Donald, Julian Glover and studio regular Barbara Shelley all deliver solid support and the film's pay-off, in which an industrial crane is toppled into the pit to smash the subterranean homesick aliens like a giant mallet, is distinctive and memorable. However, it is surely Kneale's ideas and daring that make Quatermass & The Pit so enduring. 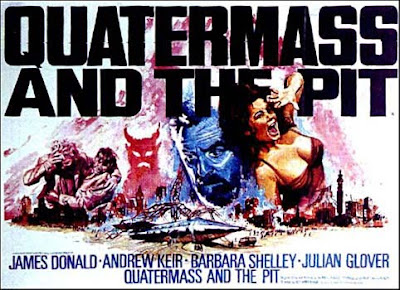 The film's plot revolves around the shocking extraterrestrial findings and their implications for humanity. Government scientist Professor Quatermass refuses to believe the military's official theory that the bones, rocket and locust-like insectoids within represent a forgotten Nazi propaganda stunt and soon works out the truth. The bugs have actually lain there for five million years, having abandoned their dying home planet and visited earth in search of a species with whom they could communicate. Finding only an underdeveloped primate populous, the creatures made a Promethean intervention to create their own intelligent race of earthlings - man - and killed off the failed mutant prototypes in a savage purge. If that wasn't enough to horrify the creationists, Kneale's script goes on to suggest that the horned arachnids at Hobbs End are also the secret inspiration for every Christian or folk conception of the devil man has ever devised - their evil faces carved into every gargoyle and superstitious etching produced by human hand.

Bold and provocative stuff - and an idea that leads to rioting and panic in the streets, a plot turn that gives the film an unexpectedly topical spin, given the sudden outbreak of looting, arson and anarchy we've seen around London and several of the UK's other major cities this week. Perhaps that's what it was all about... a revelatory tweet from a latter-day Quatermass about alien evolutionary meddling rather than just mobs of opportunistic oafs deciding en masse to abandon the rule of law because they'd quite like some free trainers and a nice new widescreen TV.
Posted by Joe at 09:48