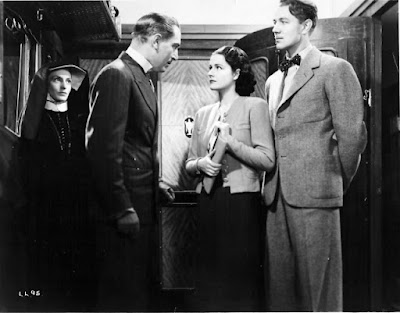 Alfred Hitchcock's penultimate British film was this splendid pre-war caper in which a young English socialite (Margaret Lockwood) encounters a charming elderly governess (Dame May Whitty) aboard a transcontinental train heading west through the Balkans who then proceeds to mysteriously disappear without trace. Increasingly perplexed, the girl enlists a roguish folk historian (Michael Redgrave) in her quest to find the missing senior while the remaining passengers repeatedly deny the woman's very existence. Could this delightful English rose really be mad, did Miss Froy simply get lost on the way back from the lavatory or is it all an elaborate ruse on the part of Johnny Foreigner and his nefarious cohorts to waylay the efforts of our green and sceptred isle's least likely spy?

Written by future production team Sidney Gilliat and Frank Launder and based on Ethel Lina White's novel The Wheel Spins (1936), Hitch only took on the project after an earlier attempt by American Roy William Neill was scrapped over script controversies. Although this might suggest that The Lady Vanishes was something of a journeyman assignment for Hitchcock, it contains many of his familiar themes and motifs, not least strangulation (Strangers On A Train, 1951), an innocent and their companion embroiled in intrigue aboard a train (North By Northwest, 1959) and foreign authorities under suspicion over a missing person lost overseas (The Man Who Knew Too Much, 1934 and 1956). The film is also arguably one of the most critically neglected in the Hitch canon, perhaps overlooked because of how conventionally entertaining it is. As writer Matthew Sweet explained in an excellent piece for The Guardian following the film's 2007 restoration, The Lady Vanishes is really about Britain's awakening from "self-absorbed triviality to uncompromising engagement with the enemy" in the run up to World War II, typified by the film's very own Rosencratz and Guildenstern, the cricket obsessed clubmen Charters and Caldicott. 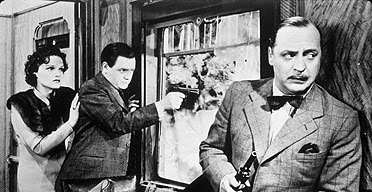 I can't think of another film in which the supporting players so routinely upstage such excellent leads. Lockwood and Redgrave are delightful together throughout and we cheer their romantic clinch at the end but it's Charters and Caldicott (Basil Radford and Naunton Wayne) that consistently make us laugh, turning the whole espionage mystery into a bristling comedy of manners. This bumptious, perpetually unenthused Walrus and Carpenter apparently expect the rest of Europe to be ordered according to the cosy standards they are used to at home and are regularly put-out when confronted by the contrary. They are ticked off to have to share a hotel room with a saucy native maid when an avalanche blocks the train's progress, they are affronted to find there's no steak on the menu when the same venue is unexpectedly overrun with guests and quite bilious when a voice in London is unable to tell them the latest test score over the telephone. As for a lady requesting the sugar bowl when Charters is in the middle of illustrating a key passage of play with its cubes... iciness is the response and Miss Froy's imprisonment carries on needlessly as a result. I have rarely seen the English character more effectively skewered in fiction than in the portrayal of these fusty, be-tweeded oafs abroad, who are only prepared to shoot at the enemy once they've been assured it's really necessary and even then ask politely for a handkerchief to bandage a bullet wound.

So beloved were this pair that they were written into several more films thereafter including Night Train To Munich (1941) and Millions Like Us (1943), both of which were also penned by Gilliat and Launder, as well as Crook's Tour (1941) and Secret Mission 609 (1942). They were even revived for their very own BBC TV series in 1985. Radford and Wayne meanwhile made careers playing variations on these genteel buffoons in such fare as Passport To Pimlico and It's Not Cricket (both 1949) before the former died over dinner in a Mayfair restaurant in 1952. A fitting end - it must surely have been teatime.