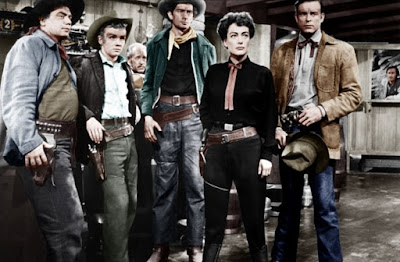 Joan Crawford and Mercedes McCambridge star as deadly rivals in this camp, bold and really rather mad feminist role-reversal Western from Nicholas Ray for Republic Pictures. Crawford's Vienna, a cornered cat, finds herself playing surrogate matriarch to the male croupiers and bartenders at her empty saloon in an underpopulated, gusty Arizona boomtown just waiting for a new railroad to come through. Her local rival is Emma Small (McCambridge), a hateful rancher and banker's sister, intent on seeing Vienna run out of town. The menfolk, including land baron John McIvers (Ward Bond), suspected bandit The Dancin' Kid (Scott Brady) and drifter minstrel Johnny Guitar (Sterling Hayden), look on passively as these two alpha females play out an increasingly personal and vicious Freudian psychodrama to its inevitable bloody endgame. It's like Calamity Jane (1953) re-imagined as a nightmare.

In Johnny Guitar, Crawford's character is aggressively masculinised - appearing first in black trousers, a bolo tie and boots and spoken of admiringly by her employees, one of whom states that he has, "Never seen a woman who was more of a man. She thinks like one, acts like one and sometimes makes me feel like I'm not one." Vienna is a bullish, headstrong and independent business woman (recalling Crawford's famous role in Mildred Pierce, 1945), the antithesis of the subservient church-going ranchers' wives and prostitutes the Western genre usually insists upon. As her revived romance with Johnny progresses, however, she learns to relax, allows herself to be supported and even fries his breakfast. Her nemesis meanwhile is an embittered, sexually repressed shrew whose long-running feud with Vienna and desire to see her framed and hung without trial seems to stem from a deep-rooted sexual jealousy. There are certainly some heavy hints that Emma is in love with The Dancin' Kid (who, like Johnny, is after Vienna) but is decidedly less than comfortable when he tries to waltz with her and is certainly keen to hunt him down and string him up once his gang robs her late brother's bank. Vienna explains their tangled relations thus: "He makes her feel like a woman and that frightens her." Emma only really looks happy, orgasmically so, when she's burning down Vienna's saloon and some critics have called her a "proto lesbian", an interesting label that further muddies this already conflicted character. Whatever her motivations, this nutty chick certainly has sex and death all mixed up and it's a relief when she finally gets what's coming to her courtesy of Vienna's six shooter.

Ray's film is a strange one visually as well as thematically. Vienna's gambling hall seems to have been built into the side of a rockface while The Dancin' Kid's surprisingly needy Mild Bunch (consisting of Ben Cooper, Ernest Borgnine and Royal Dano) hide out in a secret lair beyond a waterfall. Shot in Trucolor, Emma and the mob-happy townspeople all wear funeral black while Vienna, Johnny and the outlaws don a series of loud and increasingly outlandish coloured outfits. Crawford looks particularly silly in some of these - starting out as a cowgirl dominatrix, she goes on to appear variously in a floor-length white gown for the hanging scene, a mid-80s Michael Jackson costume complete with socks for the subsequent escape and a yellow shirt and red neckerchief in the final shoot-out, which just makes her look like a mid-level McDonald's manageress. This all adds to the eccentric tone but ultimately one's patience starts to run thin. Hayden is excellent as the pastel-favouring Johnny but we only get to hear him play his titular instrument once and ultimately this enigmatic, "gun crazy" figure ends up lost in the gender experimentation and pop psychology of the foreground, which just feels like a waste of a great name and conceit.

François Truffaut loved Johnny Guitar and called it "the Beauty and the Beast of Westerns" and it's certainly a fascinating failure.