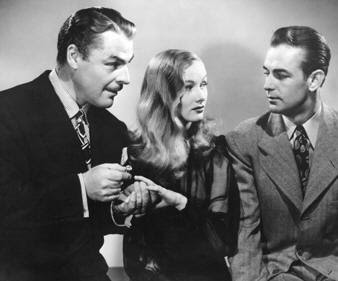 This was Paramount's second crack at an adaptation of Dashiell Hammett's 1930 political thriller - after Frank Tuttle's 1935 version with George Raft, Edward Arnold and Ray Milland - and it turned out to be a winner. Veronica Lake and Alan Ladd were teamed for the second time and continued to spark nicely off one another in a story about complex relationships and loyalties under strain.

Ladd stars as Ed Beaumont (dropping the initial "N" and fine moustache of his literary counterpart), a "hanger-on" and adviser to San Francisco politician Paul Madvig (Brian Donlevy), an influential but decidedly dubious local fixer. With an election looming, Madvig is backing reform candidate Ralph Henry (Moroni Olson) for governor and is in love with the man's spunky daughter Janet (Lake) but soon finds himself in a whole heap of mess when Henry's no-good gambler of a son Taylor is slain in the street after a heated confrontation with Paul. It's up to Beaumont to investigate the circumstances of Taylor Henry's demise but even he has his misgivings about his boss, doubts that are only compounded when a series of mysterious poison pen letters begin to appear around town accusing Madvig of murder.

Director Stuart Heisler's film is a pretty faithful recreation of Hammett's source novel that isn't afraid to take liberties with the material. The whodunnit plot is simplified to eliminate some complicated clues involving missing hats and canes and Joseph Calleia's urbane gangster Nick Varna comes in as a replacement for the book's Shad O'Rory (perhaps because contemporary audiences would have been sceptical about Maltese actor Calleia attempting a lilting Irish brogue). However, Jonathan Latimer's script wisely retains many of the book's best scenes, including Beaumont's graphic, sustained torture in the "dog house" at the fists of Varna's henchmen Rusty and Jeff (Eddie Marr and William Bendix). The latter of these two goons is repeatedly described by Hammett as an "apish" evolutionary retrogression, a Prohibition Mr Hyde, who takes an immediate shine to Beaumont, whom he labels, admiringly, "a God-damned massacrist". Jeff's relationship with his victim certainly takes on a viciously sadomasochistic edge (“I never seen a guy that liked being hit so much or that I liked hitting so much”), which is beautifully played out by Bendix. This uncomfortable theme - that sex and violence are two sides of the same coin - is neatly expanded upon in the opening scene of Heisler's film when Janet slaps Madvig for bad-mouthing her brother, whereupon he instantly falls for her. One slight deviation from the text is that Beaumont's relationship with Paul has something decidedly homoerotic about it in the book, which is thoroughly scrubbed out on screen. Both men are careful and "sheepish" around one another in Hammett's Glass Key, old friends whose parting at the end feels more like a heartbroken divorce than a simple betrayal. None of that college boy mush here.

Ladd is actually perfectly cast as Beaumont in spite of the fact that this remake was primarily commissioned as a further vehicle for the Ladd-Lake brand. He is as cool, calculating, opaque and inscrutable as the character is written (arguably a thinly disguised, if idealised self-portrait by the author). Perhaps the most interesting thing about this protagonist though is just how extraordinarily ambiguous he is, far more so than the same writer's Continental Op, Sam Spade or Nick Charles. As critic Peter Wolfe put it in his book Falling Beams: The Art Of Dashiell Hammett (1985): “His neglect of the poor, the sick and the jobless make him, along with his free spending, an unlikely Depression hero”. In a time of bold strokes, of G-men and rum runners, hobos and bankers, Hammett presents us with a deeply worldly, matter-of-factly amoral man unafraid to make unsentimental choices to suit his own ends. However, his commitment to Madvig is recognisably human and his personal motto is one for his age and ours: "I can stand anything I've got to stand."
Posted by Joe at 20:58