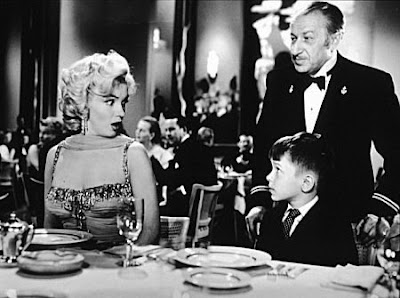 Marilyn Monroe's sweet natured gold-digger Lorelei Lee can't hide her surprise when she finally gets to meet eligible heir Henry Spofford III (George "Foghorn" Winslow) aboard a transatlantic liner in Howard Hawks's smashing Fox comedy from the 1949 stage musical by Anita Loos. It was here that Marilyn perfected her innocent, sensual brand of sex appeal and she is a delight to witness throughout - it's astonishing to think this creature really walked upon the earth - but the late Jane Russell also deserves enormous credit as the film's wry, knowing straightwoman. Russell is especially game impersonating her co-star in a Paris courtroom and in her ludicrously camp solo number 'Ain't There Anyone Here For Love?', which takes place in a cruise ship's gymnasium against a backdrop of male Olympic athletes working out in ill-advised skin coloured shorts. 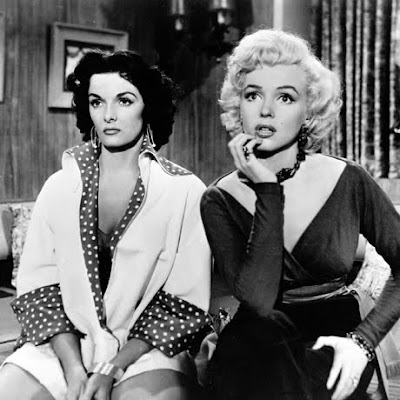 Perhaps too readily dismissed these days as a fifties museum piece remembered only for the excellent but endlessly parodied 'Diamonds Are A Girl's Best Friend', Gentlemen Prefer Blondes is an ironic and funny treatment of the showgirls and sugar daddies theme. Lorelei chases after harmless old lecher and diamond magnate Sir Francis "Piggy" Beekman (Charles Coburn) while Russell gently disapproves but the film has little to say about the matter beyond asking: who really loses in this deal? Arguably Lorelei's wet blanket millionaire fiancé Gus (Tommy Noonan) or Lady Beekman (Norma Varden), though she in particular is snooty, self-satisfied and complacent in her wealth - more interested in the return of her tiara than her brandy-mottled husband. Piggy gets one last squeeze before the grave and Lorelei wins some nice new bling and a little security - where's the harm? Preston Sturges' The Palm Beach Story (1942) also pondered this subversive spin on conventional morality, as would 1953's How To Marry A Millionaire and Billy Wilder's Some Like It Hot (1959), both of which, of course, also starred dear Marilyn, the period's reassuringly non-threatening face of breathy sexuality. It's hard to resist such relaxed, pragmatic and thoroughly adult logic.

Packed with bags of charm and a delirious sense of fun, Gentlemen Prefers Blondes has plenty of fine scenes but Monroe getting stuck in a port hole and requiring the aid of young Spofford is a definite highlight. Animal magnetism indeed.
Posted by Joe at 12:38