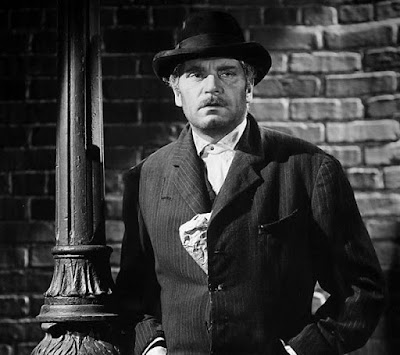 No, not that one. Several billion light years away from Brian De Palma's 1976 Stephen King adaptation of the same name and all its menstrual angst, oppressive Christian fundamentalism, pig's blood and telekinesis is this truly heartbreaking period romance by William Wyler starring Laurence Olivier and Jennifer Jones.
Taken from Theodore Dreiser's novel Sister Carrie (1900), Wyler's film follows the fortunes of its eponymous heroine (Jones) as she leaves Hicksville, Missouri, for the big bad city of Chicago, first working in a Dickensian shoe factory before reluctantly shacking up with uncouth, manipulative salesman Charlie Drouet (Eddie Albert), a predatory oaf who repulses her but whose overtures she can't ignore because of her dire financial straits. Enter onto this unhappy scene one George Hurstwood (Olivier), manager of the exclusive local eaterie Fitzgerald's, who is kind to Carrie and falls in love with her over a game of cards. George is unhappily married to an equally shrewd and controlling spouse (Miriam Hopkins) and is desperate to intervene and rescue Carrie from her deeply compromised and socially frowned-upon domestic arrangements. However, Mrs Hurstwood soon uncovers their tryst and confronts her husband, who in turn is abandoned by Carrie when she learns of the marriage. Charlie meanwhile, sensing defeat, seizes the opportunity to propose to the distraught Carrie, who accepts against her better judgement. George is spurred into action. Accidentally-on-purpose lifting some money from his employer, he lies to Carrie to get her to board a train with him wherein he explains everything. Reconciled but penniless after George is relieved of the last of his illicit dough, the pair get hitched and set up home together in a cheap New York flophouse. George finds it increasingly difficult to find restaurant work because of his age and the circumstances of his departure from Fitzgerald's and Carrie soon suffers a miscarriage. Reasoning that they are better off apart and leaving George to his fate, she auditions for the stage and becomes a successful actress while her former husband sinks into a slough of despondency and poverty, roaming the streets in search of scraps, sustained only by her fading memory, his fall from grace complete. 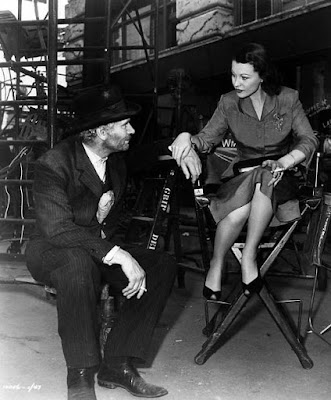 Olivier - pictured above on set with his wife, Vivien Leigh - was reunited with director Wyler after their popular Wuthering Heights 13 years earlier and is utterly devastating in this saddest of doomed romances. George Hurstwood's tragic decline from gentleman maitre d' to shambling destitute is almost physically hard to watch, so earnest and decent is this character in the face of such a cruel and savage world. Hurstwood is entirely undeserving of his end - sneered at as "Rockefeller" by his colleagues and overlooked by employment agents because of his obvious breeding and smart attire - his motivation being entirely without vanity and stemming only from sympathy and love for a poor, ill-treated woman he wants to rescue from a life imposed upon her by a louse who shamelessly took advantage of her inexperience and naivety. George is emasculated and robbed by his hateful wife and finally damned for eternity for daring to take a stand and make one last bid for happiness after squandering away his best years in servitude. Jones is excellent too and very touching - the piece wouldn't work if she wasn't on top form - but it's very much the thespian's show and Olivier dominates from his first appearance. David Raksin's score is occasionally a little on the melodramatic side but that's really the only criticism I can offer of this tender and nakedly emotional film, pretty much as satisfying an experience as cinema has to offer. What's that? No, no I'm not crying. It's just... it's just a piece of grit in my eye, that's all... (sniff)...
Posted by Joe at 15:48