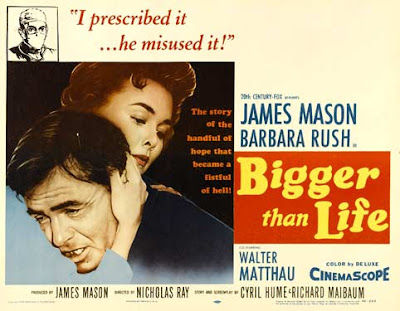 Englishman James Mason co-wrote, produced and starred in this terrifying fifties issue drama from Nicholas Ray - fresh off Rebel Without A Cause (1955) - about a suburban American primary school teacher whose life disintegrates when he becomes addicted to prescription cortisone. Mason is electric as Ed Avery, a mild-mannered educator and caring pater familias transformed into a monstrous domestic tyrant by the supposed wonder drug - erratic, arrogant, aggressive, twitchy and paranoid. Often films built around their star's central performance can topple over into egomania and self-indulgence but Mason is simply towering here and was quite possibly never better. He's ably supported by Barbara Rush and young Christopher Olsen, however, as his increasingly frightened wife and son, effectively experiencing a home invasion at the hands of a man who bears little resemblance to the one they love. There's also a nice early role for Walter Matthau as a concerned PE teacher turned gallant woodsman, rushing to their aid when Avery finally succumbs to a megalomaniacal psychotic episode, believing himself to be the Biblical Abraham sent to smite his own flesh and blood, a scene played out as the family TV set blares a sickly funfair theme. If there's a more ominous line in film than "God was wrong", I haven't heard it. 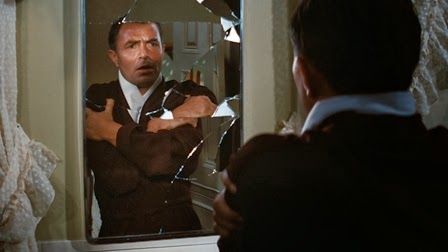 Ray's film was based on a 1955 New Yorker article by the magazine's medical correspondent Berton Roueché entitled 'Ten Feet Tall', written for the screen by Cyril Hume and Richard Maibaum with help from Mason plus additional uncredited contributions from Ray, Gavin Lambert and playwright Clifford Odets. The tension is cranked up throughout courtesy of a nervy score from Otto Preminger's composer David Raksin and it's exquisitely shot in CinemaScope by Joseph MacDonald, whose darkened primary hues give the film a brooding, haunted look not a million miles away from the landscape paintings of Edward Hopper. The Cahier Du Cinéma crowd certainly adored Bigger Than Life and it's recommended viewing for fans of TV's Mad Men (2007-) for its troubling insights into the real goings on behind the net curtains of the period's imagined Rockwellian small-town world of nuclear families, fishing trips and bridge games. It may take the intervention of cortisone to turn Ed Avery into a cracked mirror but the infants in his school are already painting pictures of trains running late and men angry at their mothers. Paging Dr Freud...
Posted by Joe at 14:32