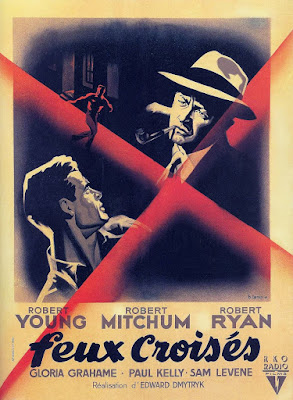 Director Edward Dmytryk made this neat little social issue B noir for RKO from a novel by Richard Brooks entitled The Brick Foxhole (1945) about the murder of a recently discharged gay WWII veteran. John Paxton's screenplay adapted the work to make the protagonist Jewish rather than homosexual in order to sidestep the Hays Code and tackle the topical theme of racial prejudice and the result is a strong if preachy plea for tolerance and unity in a suddenly directionless post-war America.
The film opens on the spectre of two men shadow boxing, quite literally, in a Washington D.C. flophouse. When one of the combatants, Joseph Samuels (Sam Levene), hits the carpet and breathes his last, the police are called in. First on the scene is Captain Finlay (Robert Young), a jaded, professorial brand of detective ("Everybody's the type") who struggles to work out why three army buddies who had been drinking with the deceased, a man they had never previously met, would be wrapped up in this seemingly random act of manslaughter. Enlisting the help of their NCO, Sergeant Keeley (Robert Mitchum), Finlay sets to work probing his suspects in search of a likely motive.
Rather like George Marshall's Raymond Chandler-scripted The Blue Dahlia (1946), Dmytryk's film deals overtly with the psychological troubles of servicemen returning to the US after battling Nazi's in Europe. The likes of chief suspect Mitchell (George Cooper) and hateful bigot Montgomery (Robert Ryan) are damaged men struggling to slip back into the old routine of work and marriage after being trained to kill and tackle the black-and-white moral certainties of conflict. As victim Samuels puts it: “We’re too used to fighting. But we just don’t know what to fight. You can feel the tension in the air. A whole lot of fight and hate that doesn’t know where to go.” Hence Montgomery's poisonous anti-Semitism. The man is seeking a new enemy, someone else to take the fight to and settles on the Jewish citizens he tells himself stayed at home to profiteer out of greed and cowardice ("You know the kind. Played it safe during the war, keeping themselves in civvies, nice apartments, swell dames... you know the kind"). Released the same year as the similarly themed Gentleman's Agreement starring Gregory Peck, Crossfire's moral is clear and spelled out loudly by Finlay in the film's most grandstanding scene: “Ignorant men always laugh at things that are different - things that they don’t understand. They’re afraid of things they don’t understand - they end up hating them.” 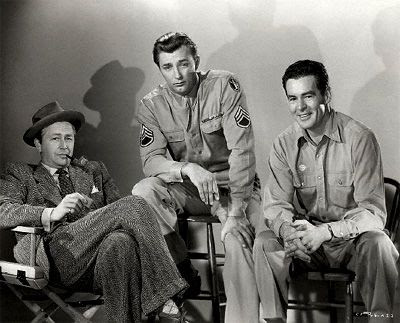 Ultimately, Crossfire is a little slow and talky for my taste but it's good intentions are undeniable. The three Roberts are all excellent and Gloria Grahame does her brazen thing as a cynical working girl unwilling to be Mitchell's alibi. Their scene, dancing together slowly in the moonlit, disused garden of an old spaghetti restaurant, must surely be one of the movies' loveliest moments.
For Dmytryk (who also made another noir classic, 1944's seminal Chandler adaptation Murder, My Sweet starring Dick Powell), the film's subject matter and particularly Montgomery's crude allusion to people with "funny names" would prove horribly prophetic. The director, US born but of Ukrainian stock, soon found himself under investigation by Joseph McCarthy's House Un-American Activities Committee (HUAC) and was jailed for refusing to name names. In 1951, he was again called before HUAC and this time conceded, listing those Communist sympathisers - including Crossfire's producer Adrian Scott - who had encouraged him to include left-wing propaganda in his films. Dmytryk was then blacklisted and effectively exiled and his career never truly recovered. America had succumbed to that "tension in the air" after all.
P.S. As a bonus, here's my old favourite Vincent Price doing a public service broadcast on the same theme to accompany his contemporaneous radio detective series, The Saint. Enjoy.
Vincent Price On Racism and Religious Prejudice.mp3
Posted by Joe at 11:02