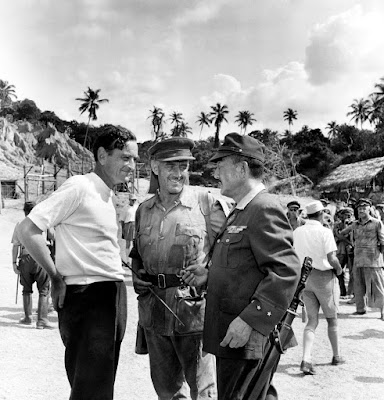 David Lean, Alec Guinness and Sessue Hayakawa enjoy a joke on location during the shooting of this sumptuous, Oscar-gathering World War II epic from the British director of Brief Encounter (1945) and Lawrence Of Arabia (1962). The film's location shoot in Sri Lanka was not always this cosy, however. The climate proved unbearably humid and riddled with poisonous pests, the film's assistant director John Kerrison was killed in an auto smash and its director and star feuded constantly over how best to interpret the character of their protagonist, but the results more than justified everyone's efforts.

I've recently signed on to write some reviews and short features for Blockbuster (which will appear here soon) and am already finding it difficult to get in through my own front door because of all the free Blu-rays they keep sending me to write about. Sigh. It's a hard life. Anyway, The Bridge On The River Kwai represents part of one of my first assignments and I'm glad as it's one of those films I've never quite found time for in the past. However, it turns out to be a gorgeous piece of work and one that has now been so beautifully restored from the original negative that you can almost feel the lush jungle foliage closing in all around you and the sweltering sun blistering your skin beneath sweat-soiled khaki. 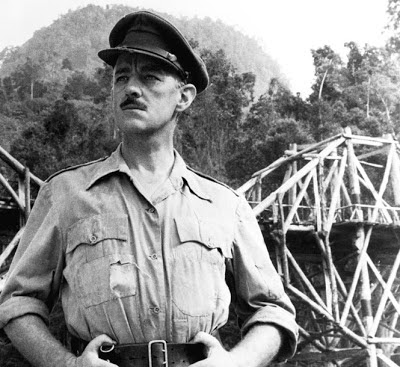 Lean's film is a fictionalised account of the building of the Burmese Railway by Japan's prisoners of war in 1943, based on a 1952 novel by Frenchman Pierre Boulle, author of Planet Of The Apes (1963). Boulle was credited with writing the screenplay but its real authors were the then blacklisted Carl Foreman and Michael Wilson, with input from Lean. The rights to the novel had passed from Alexander Korda's London Films to Sam Spiegel's Horizon Films after the Hungarian director decided the subject matter had little mass appeal and would prove problematic. Over the years Lean's work has certainly accumulated criticism for its failure to accurately convey the squalid conditions of the territory's bamboo labour camps or the brutal treatment meted out to Allied soldiers by their captors but it remains a stunning human drama nevertheless. Guinness, returning to Lean's side after a brace of brilliant Charles Dickens adaptations in the forties, Great Expectations (1946) and Oliver Twist (1948), is absolutely unforgettable as Lieutenant Colonel Nicholson, a man whose stiff upper lip is so immovable that he is quite prepared to starve to death "as a matter of principle" over the treatment of officers by his nemesis, the utterly compromised, impotent and ultimately doomed Colonel Saito (Hayakawa). Nicholson refuses to surrender his faith in military discipline, order and "civilisation", even as his copy of the Geneva Convention is slapped from his hand and he finds himself dragged off to face days upon days of dehydration and solitary confinement. "Do not speak to me of rules. This is war! This is not a game of cricket!" cries the uncomprehending Saito, but he is soon forced to accept the Englishman's terms in order to ensure his hopeless project is completed. For Nicholson, the titular bridge soon becomes an obsession - a monument to the redoubtable spirit of his battalion and Great British engineering as well as a means of keeping up his men's proud sense of identity as soldiers rather than broken slaves in the face of oppression. So monomaniacal is his fixation with the construction that he finally loses self-control and attacks William Holden's US Naval Commander Shears as he attempts to blow it up, but Nicholson's death, in which he falls lifelessly onto the detonator, destroying his masterpiece, must be one of the greatest in cinema and is as revelatory in its way as Captain Ahab's.

Orson Welles, John Ford, Howard Hawks, Fred Zinneman and William Wyler were all approached to direct at various stages during pre-production and David Lean was ultimately only selected because of an "absence of anybody else", according to Spiegel at his most disingenuous. The brash Jewish producer was temperamentally at odds with the Englishman and the pair locked antlers on several occasions. Similarly, Charles Laughton, Noël Coward, Ray Milland, Anthony Quayle, James Mason, Douglas Fairbanks Jr, Ronald Colman and Ralph Richardson were all considered for the part of Nicholson ahead of Guinness. The production's real winner, however, proved to be Holden, who took home 10% of the box office takings on top of his appearance fee, a move that made the actor very rich indeed. Cary Grant had been promised Holden's part and reportedly wept when it was taken away from him. Little wonder. 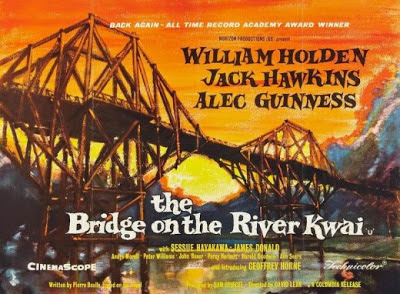 While it might be tempting to compare The Bridge On The River Kwai with other wartime jungle epics such as John Huston's The African Queen (1951, another Spiegel joint) or Apocalypse Now (1979), it perhaps most closely resembles Werner Herzog's Fitzcarraldo (1982) as a portrait of one man's descent into madness as a result of a deranged determination to build a major piece of infrastructure in impossible terrain. The scene in which the wooden bridge finally does explode in a shower of fire and splinters also recalls the extraordinary Civil War train wreck in Buster Keaton's The General (1926). Finally, Lean's film is highly recommended to fans of HBO's recent hit miniseries The Pacific (2010), which dealt with the broader context of Second World War combat in South East Asia.
Posted by Joe at 12:02