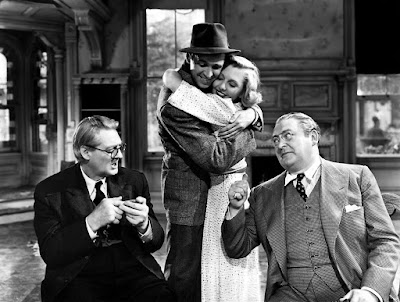 This slightly preachy screwball comedy may not quite be up there with Frank Capra's best work but it still has plenty to recommend it. Rather in the spirit of George Cukor's Holiday, released the same year, Capra's adaptation of the Pulitzer-winning George S. Kaufman and Moss Hart play tells the story of class cross'd lovers Anthony Kirby Jr (Jimmy Stewart) and Alice Sycamore (Jean Arthur). He's the son of a stuffed shirt Wall Street munitions tycoon (Edward Arnold) who's hoping to buy up the neighbourhood where her madcap family reside in order to knock it down and build a timely factory. She's Jr's secretary and the object of his snooty mother's disdain. Things get worse for the pair when her free-spirited grandfather (Lionel Barrymore) refuses to sell up at any price and the Kirby's arrive a night early for dinner with the Sycamores, their prospective in-laws. The snobs find themselves in a world of ballerinas, xylophones, harmonicas, Russian dancing masters, ditzy novelists, ape masks, experimental firecrackers and amateur wrestling and begin to have grave doubts about their son's choice of bride.

Not quite as anarchic or zany as might have been intended at the time, You Can't Take It With You wades through Capra's usual themes of anti-capitalism, community and the pursuit of happiness in predictably syrupy fashion. The scene below in which Barrymore ticks off Arnold while the pair are locked up in the drunk tank is a pretty classic example of the sort of tub-thumping the director handled with much greater panache in other Stewart vehicles such as Mr Smith Goes To Washington (1939) or It's A Wonderful Life (1946). This sort of rhetoric from Barrymore's Grandpa Vanderhof would all be easier to swallow if the script addressed just how it is that this man has been able to survive in retirement for 30 years, supporting an entire extended family and assorted hangers-on in their various artistic endeavours, without any obvious source of income whatsoever. He can't have saved all that much just from dodging his income taxes. As British novelist Graham Greene wrote of the character in a contemporary review of the film for The Spectator, "Like the British Empire, he has retired from competition with a full purse." Greene was otherwise exasperated by the film and said, "The director emerges as a rather muddled and sentimental idealist who feels - vaguely - that something is wrong with the social system... it is useless to trying to analyse the idea behind Capra films: there is no idea that you'd notice only a sense of dissatisfaction, an urge to escape... one prefers Wall Street". Ouch!

I would argue that it's pretty disingenuous to pick holes in a film with this much native charm. Stewart and Arthur are as lovely a team here as they would be in Mr Smith and are a particular delight learning to dance the "Big Apple" with a gaggle of precocious street kids before causing havoc in a posh eatery with complaints about non-existent rats. Also of interest is their surprisingly prophetic conversation below in which Stewart's Tony Kirby appears to anticipate the discovery of solar power.

A final aspect of the film worth keeping an eye out for is the screen debut of a key Capra stock player - Jimmy the raven. This is the same avian actor that appeared in the likes of It's A Wonderful Life and Arsenic & Old Lace (1944) and, allegedly, 600 other movies, if his trainer Curly Twiford is to be believed.
Posted by Joe at 18:16