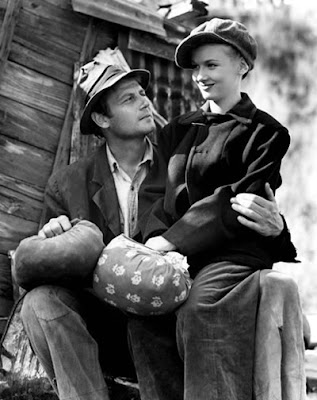 "To the memory of those who made us laugh: the motley mountebanks, the clowns, the buffoons, in all times and in all nations, whose efforts have lightened our burden a little, this picture is affectionately dedicated."
- Preston Sturges, Dedication To Sullivan's Travels

The Coen Brothers took the title for their Depression-set Homeric picaresque O Brother, Where Art Thou? (2000) from this splendid Preston Sturges satire for Paramount about an idealistic Hollywood director who sets out to experience life in the raw so that he can make a "socially significant" film about poverty in America instead of his usual studio musicals and comedy showcases. Sick of churning out crowd-pleasing guff like Ants In Your Pants Of 1939, John L. Sullivan (former stuntman Joel McCrea) promises that his forthcoming opus O Brother, Where Art Thou? (apparently an adaptation of a serious novel by one "Sinclair Beckstein") will be "a commentary on modern conditions", full of "stark realism" and the "problems that confront the average man", "a true canvas of the suffering of humanity... With a little sex in it".

Against the advice of his cigar-puffing superiors (Robert Warwick and Porter Hall), publicity agents (William Demarest and Franklin Pangborn) and starchy butlers (Robert Grieg and Eric Blore), the wealthy Sullivan picks up his hobo bindle and hits the road, hopping freight trains and sleeping rough with the delectable Veronica Lake in tow, a failed actress he befriends over ham and eggs in a diner. The pair push each other into swimming pools and end up in jail before realising they could get used to one another if only Sullivan was able to ditch his gold-digging wife, whom he doesn't love and only married as a tax dodge on the recommendation of a crooked business manager. At the close, Sullivan's sentimental journey of self-discovery has taught him an important lesson about the human condition and the true value of comedy as a unifying source of strength and consolation in a hard and unforgiving world.

Sturges' film is an absolute joy from start to finish. This baby really has it all - dialogue so cynical and sharp it'll give you a papercut, a treasure trove of hysterical character performances, athletic physical pratfalls from the leads and a killer car chase involving a studio support truck and a 13 year-old boy racer. Sullivan's Travels is also an invaluable document of the sights and sounds of down-and-out 1940's America, the scene below in which a chain gang visits a black Baptist church to watch a Pluto cartoon being a particularly beautiful record of a lost time and place.