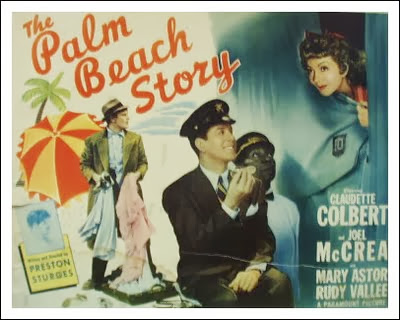 Here's another finely scripted comedy from Preston Sturges' early Forties purple patch - a screwball caper about good wife Gerry Jeffers (Claudette Colbert) who decides to run away from her unsuccessful architect spouse Tom (Joel McCrea) to get a divorce so that she can marry a millionaire and then use his money to help her estranged other half fund the pioneering urban airport project he has so far failed to get off the ground. Tom, however, is understandably not too keen on this scheme as he happens to be in love with her in spite of their financial woes. He gives chase, following Gerry down from New York to Florida to find her in the arms of the richest man in America, the meek, generous but terminally serious John D. "Snoodles" Hackensacker III (crooner Rudy Vallee). Gerry is all set to carry out her gold-digging plot while Tom finds himself the object of Hackensacker's sister's affections, the serial wedder and maneater Princess Centimillia (Mary Astor). But will Gerry go through with her Indecent Proposal-esque scheme or will the quarrelling lovers find a way to live happily ever after after all?

"Sex always has something to do with it, dear", Colbert tells jealous husband McCrea early on in The Palm Beach Story, a surprisingly frank attitude for a film of this vintage to be striking and further proof of the ahead-of-his-time genius of Sturges. Indeed, an early draft of what was then titled Is Marriage Necessary? was nixed by the Hays Office because of its irreverent content. 17 years before Billy Wilder's Some Like it Hot, Sturges was packing his heroine off to the Sunshine State on the trail of an ageing tycoon to manipulate into marriage in order to secure herself a comfortable future. Like Marilyn Monroe's Sugar Kowalcyzk in that film, Gerry's behaviour is not treated as cruelly cynical but rather as an endearingly pragmatic and self-sacrificing solution to a problem from which everyone concerned benefits. Everyone, that is, except Tom, whose pursuit of his wife shades The Palm Beach Story with real pathos. His emasculated frustrations as a creative professional unable to realise his designs or provide for his wife are all too believable and the thought of his losing her for the sake of the rent is a genuinely devastating one. 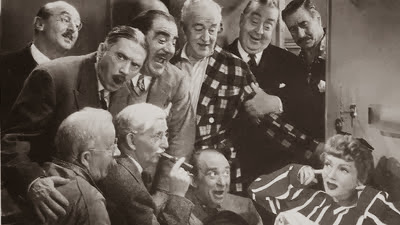 Sexual politics aside, this is a consequence-free fantasy romp featuring some splendid comedy turns, my favourite being Robert Dudley's stone deaf Texas Wienie King, Gerry's unlikely fairy godmother who tells her that the secret to success in the sausage industry is having a secret source of cheap meat and warns her against the product that made his fortune: "Stay off 'em, you'll live longer". The meddlesome Ale and Quail Club are also a hoot, a collection of Sturges stock players who board a train south from Penn Station and proceed to get roaring drunk, shoot out the windows, serenade Colbert with a glee club rendition of 'Sweet Adeline' and send out a hunting posse roaming through the aisles complete with shotguns and beagles, all before their carriage is quietly disconnected and abandoned on the line so that the boys can sleep it off. The Palm Beach Story's twist ending is also as laugh-out-loud funny as it is unexpected and how about this as an example of Sturges' white hot poison pen: "Don't you know that the greatest men in the world have told lies and let things be misunderstood if it was useful to them? Didn't you ever hear of a campaign promise?"

McCrea is as reliable as ever in what might have been a fairly thankless straight part, Colbert is too gorgeous to be real and Mary Astor of The Maltese Falcon (1941) is delightful as the motor-mouth princess ("Nothing is permanent in this world except Roosevelt, dear") whose every step is dogged by her absurd but persistent foreign suitor Toto (Sig Arno). Vallee is also excellent as the shy playboy - adept at physical comedy in a scene with Colbert involving bunk berths and broken glasses - and otherwise charming and in control, delivering such lines as the following with panache: "That's one of the tragedies of this life - that the men who are most in need of a beating up are always enormous." His inevitable musical numbers feel too much like a contrivance, however, and intrude upon what is otherwise a whip smart story.

P.S. To those who criticise Preston Sturges' films for their treatment of black characters - both here and in Sullivan's Travels (1941), bug-eyed black stereotypes are subjected to indignities in transit for comic relief - I would point to the case of Fred Toones, who plays George the club car bartender in The Palm Beach Story. Any black actor happy to be credited as "Snowflake" must have known the realities of his profession and been prepared to compromise to get ahead. These scenes are unquestionably regrettable but shouldn't be judged by modern standards.
Posted by Joe at 19:03