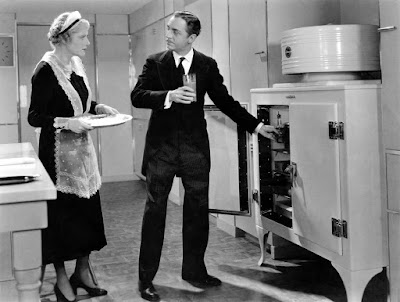 The magnificently arch Jean Dixon and William Powell sprucing up a hangover cure with a "counter-irritant" for batty lady of the house Angelica Bullock (Alice Brady) in Gregory La Cava's hysterical My Man Godfrey for Universal. Powell had been brought in on loan from MGM for the part and, after reading Morrie Ryskind's script, insisted that he be joined by Carol Lombard. The actor knew Lombard was right for the material and was prepared to overlook the fact that they'd gotten divorced three years earlier for the good of the film. A great call as both prove to be pitch-perfect.

The Depression-set story is a simple one. When "Park Avenue brats" Angelica (Lombard) and Cornelia Bullock (Gail Patrick) set out on a drunken society scavenger hunt they are asked to bring back a "forgotten man" to win top prize. They find just such a down-and-out at the city dump in the person of the mysterious Godfrey Park (Powell). He takes exception to the game's poor taste and to being patronised by Cornelia and promptly shoves her into an ash pile. Immediately endeared to this bewhiskered bum, the ditzier and younger Angelica apologises and Godfrey agrees to accompany her to the finishing line so that she can trump her snide sister. Angelica wins out and realises she's falling in love with Godfrey so spontaneously offers him a job as the family butler, an offer he's in no position to refuse. But who is this dapper, Harvard-educated fellow serving cocktails to the kooky, irresponsible, free-spending Bullock clan and what's he really up to?

The leads are impeccable, the script top notch, the direction inventive and the character performances out of this world. Mad matriarch Brady is lovely, Eugene Pallette as her put-upon husband is a scream and Mischa Auer's gorilla impression just has to be seen to be believed. The actor often played comic Russians in comedies of this period (see also Frank Capra's You Can't Take It With You, 1938) but was rarely better than here as Brady's "protégé", a kept man who spends more time eating than composing. Englishman Alan Mowbray also makes an appearance as an old college friend of the suave Godfrey and plays it surprisingly straight, especially when you recall his barn-storming turn as boozy actor Granville Thorndyke in John Ford's My Darling Clementine (1946). Also keep your eyes peeled for Jane Wyman, Franklin Pangborn and Grady Sutton in minor supporting roles but it's Powell and Lombard's comic romance that gives the film such heart. Thank goodness their separation proved amicable!