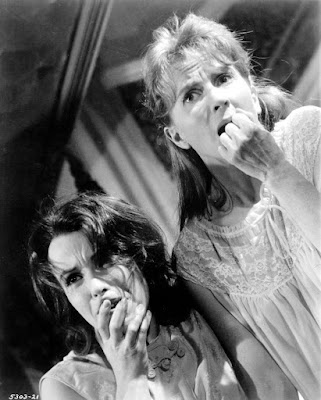 Oh come on ladies, it's really not as frightening as all that. Robert Wise's psychological horror is one of those films I just don't get. Serious critics, including such heavyweights as Pauline Kael and Martin Scorsese, have always raved about how terrifying it is with apparent sincerity, but how anyone could regard it as anything other than tame, clichéd and downright boring is entirely beyond me.

I think what really grinds my gears about The Haunting is that it remains the first title most people think of when asked to name a strangers-in-a-haunted-house ghost story and Wise's film is simply too oafish to deserve the honour. The idea that it is somehow more sophisticated than other films in its genre because it depends upon sound effects for shocks rather than ghoulish rubber costumes simply doesn't hold up. To my mind it offers one genuine scare - a standard face-at-the-window moment when the lost Grace Markway (Lois Maxwell) appears suddenly through a trapdoor at the top of the library's rickety spiral staircase - which is, frankly, old hat, reliant entirely on visual impact and occurs after nearly 90 minutes of very little indeed. Meanwhile Nelson Gidding's script (based on Shirley Jackson's 1959 novel The Haunting Of Hill House) repeatedly punctures any hard-won tension the film has managed to drum up with unfunny comic bits, as when Richard Johnson's Dr Markway accidentally walks into a broom closet. The film is occasionally unintentionally amusing, however, usually because of some unconvincing bit of acting - the ludicrous accent adopted by Valentine Dyall as surly groundskeeper Mr Dudley being a fine example. Aside from these faults, the director spends way too much of the film's running time having his actors wandering about saying ominous things or making obvious, melodramatic pronouncements to help the hard of thinking interpret their characters. Perhaps the worst offender on this score is Rosalie Crutchley as Dyall's housekeeper wife, who immediately pounces upon poor Eleanor (Julie Harris) with this deliciously overblown warning:

"I don't stay after I set out the dinner. Not after it begins to get dark. I leave before the dark comes... We live over in town, miles away. So there won't be anyone around if you need help. We couldn't hear you... in the night. No one could..."

Dun-dun-derrr! The stagy delivery of such lines actually mirrors Humphrey Searle's score, which makes just such a flourish whenever Wise treats us to an exterior shot of the film's sub-Addams Family Gothic pile, all turrets and towers. Yawn.

Harris is asked to carry much of the dramatic burden and actually gets better as the film goes on, the actress clearly happier playing spooked-out than she is doing a repressed shrew turn. The house "wants" her, Claire Bloom's sensual medium tries to reinvent her with a makeover while the girl herself is clearly attracted to the ultimately rather selfish (and married) Dr Markway. OK, ok, but do we really, really care about the spiritual awakening of this tedious neurotic? As for Bloom, who is considerably more interesting as a polo-necked vamp, there's plenty of heavy hinting about her character's sexuality and possible attraction to the timid Eleanor but it all comes across as rather prurient in a naff, sensationalist sort of way. When Bloom's Theo rejects the advances of Russ Tamblyn - as the gauche playboy only interested in Hill House as prime real estate - Dr Markway intervenes and asks, "What's going on here?" "More than meets the eye..." Tamblyn answers with a knowing nudge-nudge, wink-wink. Oo-er missus! 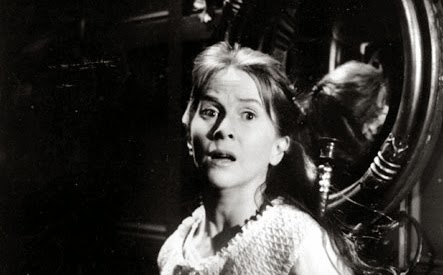 It's all a bit of a shame as there's the ghost of a decent film here stalking the halls, rattling the door knobs and casting an eerie shadow. Wise is often unfairly maligned as a journeyman director (his CV featuring everything from The Body Snatcher, 1945, to West Side Story, 1961, and The Sound Of Music, 1965) but he shows real flair and invention at times, making inspired use of mirrors, finding unusual angles to shoot from and sending the camera tumbling down the stairs to represent the point-of-view of the second Mrs Crane falling to her death. The director clearly learned something from Orson Welles when he served as editor on Citizen Kane (1941). The lush monochrome cinematography by Davis Boulton is also lovely and worthy of note. In the end though, The Haunting is just too long, too talky and, when it finally does reach a conclusion, at long last, too rushed. Maddening.

If you want a decent haunted house movie, for god's sake give this wildly overrated film a wide berth and don't even think about Jan De Bont's utterly unnecessary 1999 remake starring Liam Neeson, Catherine Zeta-Jones and Owen Wilson. Why settle for this when you could read The Turn Of The Screw (1898) or see the unashamedly silly B-movie House On Haunted Hill (1959), Stanley Kubrick's masterful take on The Shining (1980), Beetlejuice (1988) or Spanish director J.P. Bayona's unbelievably creepy allegory The Orphanage (2007)? Like an unquiet spirit, The Haunting has outstayed its welcome and is badly in need of exorcising. A surprisingly versatile genre has suffered under its malign influence for far too long.
Posted by Joe at 11:54 No comments:

Labels: Claire Bloom, Fay Compton, Horror, Julie Harris, Richard Johnson, Robert Wise, Russ Tamblyn
Newer Posts Older Posts Home
Subscribe to: Posts (Atom)
"Other people, so I have read, treasure memorable moments in their lives... What I remember is the time John Wayne killed three men with a carbine as he was falling to the dusty street in Stagecoach, and the time the kitten found Orson Welles in The Third Man"
Walker Percy, The Movie-Goer