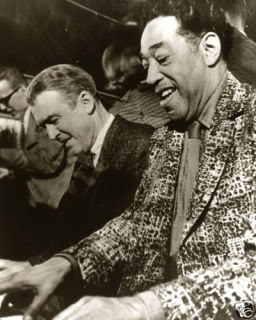 Jimmy Stewart and Duke Ellington rocking out in a scene from Otto Preminger's ace courtroom slanging match Anatomy Of A Murder, for which Ellington supplied the snappy jazz score.
Notorious for the controversy it stirred up on release over the use of such shocking words as "rape", "panties" and "spermatogenesis", Preminger's film tells of former district attorney Paul Biegler (Stewart), a small-town lawyer happily spending his twilight years in Michigan's scenic Upper Peninsula fly-fishing, playing bebop records and drinking away the long summer evenings with his alcoholic partner Parnell McCarthy (Arthur Connell) and wry secretary Maida (Eve Arden). Biegler's sleepy, Rockwellian idyll is interrupted, however, when he is contacted by trailer park femme fatale Laura Mannion (Lee Remick, perhaps best known for her performance as Katherine Thorn in The Omen, 1976), who asks him to defend her soldier husband, Lieutenant Frederick Mannion (Ben Gazzara), accused of murdering the local bartender who raped her, Barney Quill. Biegler is tempted by the high-profile nature of the case and the chance to run up against the man who succeeded him in office, Mitch Lodwick (Brooks West, Arden's real husband), but has doubts about both Mannions: the overtly promiscuous Laura and her shifty, aggressive spouse, clearly prone to outbursts of rage. Eventually Biegler agrees to take the case on the understanding that Mannion will enter a temporary insanity plea. Matters soon heat up at the trial when Lodwick brings in a ringer, Claude Dancer (George C. Scott), an assistant to the state's attorney general and a formidable opponent with more than a few tricks nestling up his immaculately-tailored sleeve. 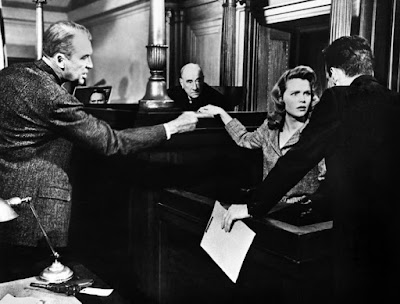 A class act all the way, from its Saul Bass opening credits onwards, Preminger's Anatomy Of A Murder is as good a legal drama as you'll see and gives 1957's earnest 12 Angry Men a run for its money. There's not a bad performance in its entire 160 minute running time - from Stewart, Scott and Gazzara to Murray Hamilton as unfriendly witness Alphonse Paquette - but special mention has to go to Joseph N. Welch as the infinitely patient and delightfully droll Judge Weaver. Welch really was a judge, rather than an actor, and had come to the world's attention following his heroic performance representing the US army against Senator Joseph McCarthy in a series of 1954 hearings conducted by the US Senate's Subcommittee on Investigations, in which Welch famously asked McCarthy, "Have you no sense of decency, sir, at long last? Have you left no sense of decency?" a fruitful line of inquiry that was greeted with wild applause from the gallery. As a thespian, Welch beat Burl Ives and Spencer Tracy to the role of Judge Weaver and makes it his own. Lee Remick is also wonderfully slutty in a part she only won after Lana Turner refused to appear in tight slacks and slapped Preminger for the suggestion. Laura's first meeting with Biegler is underscored by a knowing alto sax riff from Ellington's main man Johnny Hodges while the film's closing shot, of her abandoned shoe hanging out of a garbage can, says it all.
Wendell Mayes's screenplay was based on a best-selling 1958 novel of the same name by Robert Traver, the pen name of Michigan Supreme Court Justice John D. Voelker, who in turn had taken inspiration from a real-life homicide that took place at the Lumberjack Tavern in Big Bay, Michigan, in 1952 and the subsequent legal fallout in which Voelker became professionally embroiled.
The script and source are both sharp and coolly cynical about the realities of major court cases, arguing that they rely too heavily on subjective human judgement and interpretation and can easily descend into personality contests. Biegler and Dancer both understand that the whole shooting match is vulnerable to manipulation, that attorneys can sway jurors with showbiz pizazz, wisecracks and rhetoric and that a well constructed argument is only one aspect of the game. The former is deliberately provocative throughout the film's lengthy trial scenes, making inflammatory statements, histrionic gestures and asking questions he knows will be objected to by the prosecution because he understands that winning Mannion's case is really a matter of performance, of battling for the hearts and minds of an audience, much like an actor. "How can a jury disregard what it's already heard?" asks the defendant of his counsel. "They can't", Biegler replies with a smile. Similarly, he wryly paints himself as, "just a humble country lawyer doing the best I can against the brilliant prosecutor from the big city of Lansing", much to the chagrin of his city slicker opponent, who is equally not above physically standing between a witness and their counsel in order to stifle communication. As Biegler's boozy colleague Parnell puts it:
"Twelve people go off into a room: twelve different minds, twelve different hearts, from twelve different walks of life; twelve sets of eyes, ears, shapes, and sizes. And these twelve people are asked to judge another human being as different from them as they are from each other. And in their judgment, they must become of one mind - unanimous. It's one of the miracles of Man's disorganised soul that they can do it, and in most instances, do it right well. God bless juries." 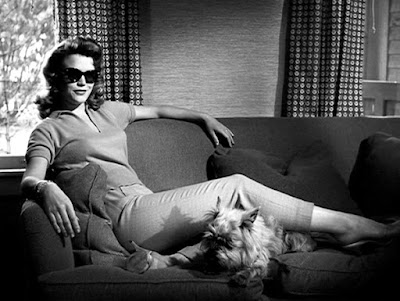 Ultimately, we are left unsure of whether Barney Quill's rape of Laura was really just that, a non-consensual violation, the circumstances surrounding his violent death having occurred some time before the events of Preminger's film. At its close, Biegler has argued the facts available to him logically and to the best of his ability and won the case but since the Mannions have skipped town without paying their bill it looks like they had something to hide after all. Maybe some people are just trash.
Duke Ellington - Theme From Anatomy Of A Murder
Posted by Joe at 16:08