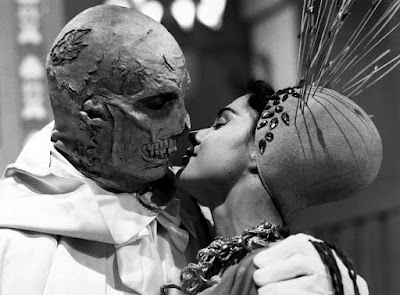 I don't know if the term "Swingin' Gothic" has been coined yet but that's about the best I can come up with to describe this self-consciously ridiculous, pre-slasher seventies horror comedy starring Vincent Price. Set in mid-1920's London, the eponymous evil genius (Price) is out to avenge the death of his wife on the poor surgeons who were unable to save her life following a bad car wreck. Seizing upon a second auto accident (yep) to fake his own death, Phibes, a famous organist and theological scholar now badly scarred beneath a rubber mask and unable to talk, holes himself away in a bizarre art deco mansion and contrives to murder the doctors involved one by one in the style of the Old Testament's ten plagues of Egypt - bees, bats, rats, locusts, darkness etc. Comic relief Detective Inspector Trout (Peter Jeffrey) of Scotland Yard is on the case but can he stop the madman before he slays a good portion of England's jobbing character actors?

The opening credits of this enjoyably silly Phantom Of The Opera variation from director Robert Fuest (who went on to shoot episodes of TV's The New Avengers, 1976-77) and shlock producers Samuel Z. Arkoff and James H. Nicholson tell you all you need to know. The scene opens on a hooded Price hammering and flailing away at some Mendelssohn on a levitating, neon red grand organ in suitably tormented fashion while an aviary of stuffed birds and a mechanical orchestra ('Dr Phibes' Clockwork Wizards') look on blankly. The more we see of Phibes' lair the more alarming things get - decked out in lavender and rose drapes with gold trimmings, all ugly statuary and floor-lit faux-marble staircases, the place seems to have been designed not so much by Phibes but someone even more ghastly and demented: Laurence Llewellyn Bowen. It later transpires that Phibes' idiosyncratic tastes extend to being chauffeured around in a jalopy that has his face sketched onto its blacked-out windows by a mute chick in knee high boots and furs who insists on playing a mournful violin whenever anyone gets murdered. Okaaay... By the time you see this kooky pair carting around golden wheelbarrows full of sprouts and cabbages with which to concoct their latest ludicrously convoluted homicide (no, really), you've probably just about given up on questioning the logic of this daftest of films entirely. 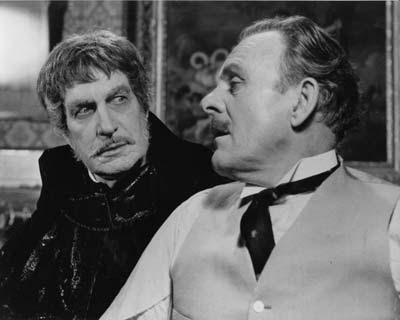 However, the forced eccentricity and plodding surrealism of the execution aside, The Abominable Dr Phibes actually has plenty to recommend it. There are good turns from Jeffrey and Hugh Griffith as a suspiciously Welsh rabbi in a cobwebbed synagogue, plus an all-too-brief cameo from Terry-Thomas as a leching physician who can't wait for his housekeeper to take the night off so that he can get back to swilling brandy and cranking his projector (ahem) over some saucy belly-dancing films before Phibes breaks in and drains his body entirely of blood. The great Joseph Cotten looks more than a little tired in a supporting role but it's nice to see him all the same. There's also some well observed British class satire on show, as when an elderly aristocrat in a gentleman's club complains irritably about the noise, before bristling his moustache and returning to his newspaper, as two policeman try to quietly aid a man impaled through the chest with a brass unicorn bust.

As a horror film, Phibes acts as a homage to some of the krazier excesses of the genre from its 1930's heyday (when films like Karl Freund's Mad Love were doing the rounds) but it also anticipates the Biblically-inspired ritual killing of David Fincher's Se7en (1995) and the ingeniously gory death traps of the more recent Saw franchise (2003-10), mostly obviously in the scene where Cotten must perform emergency heart surgery on his son to retrieve a key but also in the head-crushing frog mask donned by an unsuspecting psychiatrist  at Phibes' gala ball. A cruel joke on a self-proclaimed "head shrinker". Meanwhile Phibes' grand unveiling at the film's conclusion, where we are finally treated to the full extent of his horrific deformity, also reveals an obvious inspiration for Wes Craven's Freddie Krueger from A Nightmare On Elm Street (1984).

Price is clearly having fun with a character that almost serves as an amalgam of his many great horror roles - think of his Prince Prospero in Roger Corman's The Masque Of The Red Death (1964) and Matthew Hopkins in Michael Reeves's Witchfinder General (1968) - though the premise squanders the actor's usual expressive style and plummy voice, which is only ever heard via a tinny gramophone recording. Price would return to the role a year later in a sequel, Dr Phibes Rises Again!, and also appeared in another rather similar British production in 1973, Theatre Of Blood, in which he played a stage actor who assassinates his critics in increasingly elaborate ways borrowed from Shakespeare plays. Phibes meanwhile lives on through various punk tributes by bands such as The Misfits and The Damned and indirectly via recent interpretations of the Batman villain Victor Freeze, whose tragic wife-on-ice backstory can be traced back to poor old Anton Phibes and his embalmed other half.
Posted by Joe at 12:59