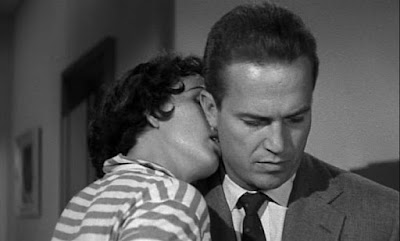 Pulp crime novelist Mickey Spillane is said to have hated this brutal, paranoid, atomic age adaptation of his 1952 mystery novella as a left-wing sabotaging of his work but Robert Aldrich's thriller remains a rollicking good ride well worth seeking out for its great lead and apocalyptic ending, in which noir meets science fiction for the first time. Ralph Meeker - somewhere between Frank Sinatra, Marlon Brando and Charlton Heston - plays Mike Hammer, Spillane's ultimate conservative male fantasy of a tough guy hero, as a violent sadist and pimp, a deceptive "bedroom dick" anti-hero for the nuclear generation several million light years away from the easy insubordination of Bogart's Philip Marlowe and Sam Spade. Scriptwriter A.L. Bezzerides, a poet by day fresh off the woeful Robert Mitchum Western Track Of The Cat (1954), actually does a great job with the fairly one-dimensional source material and was in part responsible for the introduction of the eerie, radioactive Pandora's Box conceit, a plot device that has since become a cult staple through films such as Alex Cox's criminally underrated Repo Man (1984) and Quentin Tarantino's Pulp Fiction (1994). Aldrich took just 21 days to shoot this little honey and his economical, slapdash approach is perfect for the material. As critic Alain Silver described it, Kiss Me Deadly is full of rich texture, "speed and violence" and "records the degenerative half-life of an unstable universe as it moves towards critical mass." He's right. The white light of the final explosion at the Malibu beach house almost has a cleansing quality to it, as though the bomb can wipe away all the problems of humanity that has gone before it.


There's a wealth of strong characters actors on show here, many of whom you might recognise from elsewhere, notably Paul Stewart (Citizen Kane, 1941, The Bad & The Beautiful, 1952), Strother Martin (Cool Hand Luke, 1967), Albert Dekker (The Killers, 1946, The Wild Bunch, 1969) and Cloris Leachman (The Last Picture Show, 1971). Also worthy of praise is cinematographer Ernest Laszlo, who cooks up an L.A. underworld of shining traffic, black alleyways and lonely beaches from Wilshire Boulevard to Bunker Hill. Spillane's novel was set in New York but the transition to the West Coast finds the City of Angeles looking desperate and dingy like never before. Above, you'll see two very fine scenes from Kiss Me Deadly and below you can get Nat King Cole's moody theme. Gee baby, ain't I good to you?

Nat King Cole - Rather Have The Blues
Posted by Joe at 12:16 No comments:

Labels: A.L. Bezzerides, Albert Dekker, Crime, Ernest Laszlo, Mickey Spillane, Noir, Paul Stewart, Ralph Meeker, Robert Aldrich
Newer Posts Older Posts Home
Subscribe to: Posts (Atom)
"Other people, so I have read, treasure memorable moments in their lives... What I remember is the time John Wayne killed three men with a carbine as he was falling to the dusty street in Stagecoach, and the time the kitten found Orson Welles in The Third Man"
Walker Percy, The Movie-Goer