Sticking with Raymond Chandler, his only original script as a screenwriter was this angry noir about a US navy pilot who experiences one of the worst homecomings in all of fiction. Instead of being greeted by a loving spouse, Lieutenant Commander Johnny Morrisson (Alan Ladd) returns from bombing the South Pacific to find his boozy, resentful wife Helen (Doris Dowling) making out with another man at a wild party. Not only that, but she's killed their only son in a drunken car wreck and hasn't told him. Understandably a little perturbed when he hears the news, Johnny explodes and threatens her with his service revolver, only to storm out and leave the monogrammed gun at the scene. So when Helen is found murdered the next morning, Johnny winds up chief suspect and heads out on the run, determined to find the real killer. 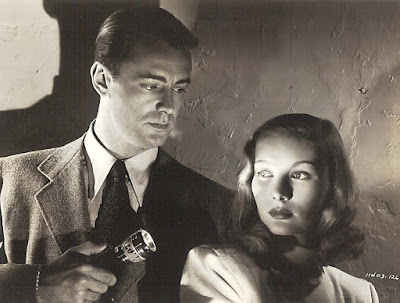 George Marshall's film, produced by John Houseman, is solid enough genre fair but a little lacking in surprises, truth be told. Ladd and the exceptionally beautiful Veronica Lake, appearing together for the third time after 1942's Graham Greene makeover This Gun For Hire and Dashiell Hammett adaptation The Glass Key, are good value and there's splendid support from the likes of William Bendix (best know for playing the title role in The Babe Ruth Story, 1948), a spivy Howard Da Silva and Will Wright as a blackmailing hotel detective. The Blue Dahlia's main point of interest though is how topical and insightful it is on the subject of returning veterans and their difficulties readjusting to civilian life after the psychological traumas of combat. The swing from the gangster capers of the thirties to the brooding urban nightmares of the forties was always about the haunted generation returning from the horrors of the battlefield but rarely is the subject addressed as directly as in The Blue Dahlia, where the character of Buzz Wancheck (Bendix) personifies the issue. An army buddy of Johnny's discharged with shrapnel embedded in his brain, Buzz is fiercely loyal but also prone to violent migraines and bouts of amnesia. As one of the last people to see Helen Morrison alive, things are looking as bad for Buzz as they are for Johnny (and he would actually have turned out to be the guilty party had the US military not objected to that particular passage of Chandler's script). The film remains sympathetic to the disturbed Buzz, however, and deserves points both for its intelligent handling of his condition and Bendix's nicely judged performance (although his hatred of jazz, which the character repeatedly refers to as "monkey music", may not endear him to all modern audiences). Here's a nice introduction to Johnny and his pals from the beginning of the film:

Ultimately, perhaps the problem with The Blue Dahlia is that, without Chandler's original conclusion, it lacks any real social comment or narrative bite. The villains remain blackhatted mobsters and corrupt authority figures in a rather ho-hum, matter-of-fact sort of way. It's just business as usual, an efficient but too predictable off-the-peg studio thriller. However, even with the ending it does have, this need not necessarily have been the case. In a film like John Huston's Key Largo (1948), for instance, much more is made out of similar circumstances. There, the theme is very much that Bogie's returning soldier must accept the need to pick up his gun one more time, to right wrongs on the home front as well as overseas, by ridding his country of sneering hoods like Edward G. Robinson's Johnny Rocco, who dreams of dragging the promised land back to the bad old days. In The Blue Dahlia, they're just bad guys and racketeers. There's really not much more to it than that and Buzz's plight remains a sad side issue.
Posted by Joe at 15:58 No comments: 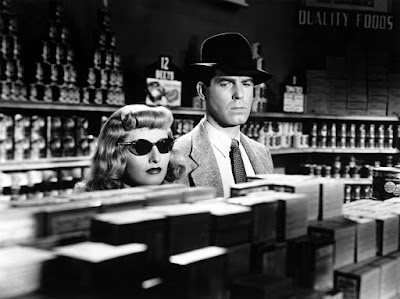 Walter Neff is bleeding. Concealing a bullet wound beneath his overcoat, Neff drives recklessly through Los Angeles, swerving to miss an oncoming truck by inches. He pulls up at the Pacific All Risk Insurance building on Olive Street and staggers inside, shrugging off small talk from a suspicious elevator operator. Alone behind his desk, Neff picks up a dictaphone and begins recording a confession for his boss, claims investigator Barton Keyes (Edward G. Robinson), and so begins the sordid tale of how an easy-going insurance salesman found himself driven to murder for the love of a crooked dame in a cheap anklet and wig.

Billy Wilder’s Double Indemnity is right up there with The Maltese Falcon (1941) and The Big Sleep (1946) in the noir canon, a key blueprint for the genre in terms of style, iconography, plotting and characters and remains utterly, utterly seminal. Leads Fred MacMurray (only cast after the illiterate George Raft had again rejected a peach of a part), Barbara Stanwyck (then the highest paid woman in America) and Robinson are pitch-perfect and the dialogue from Wilder and legendary crime novelist Raymond Chandler positively burns. Check out the opening encounter between Neff and hell-bound housewife Phyllis Dietrichson (Stanwyck) below for a taste of that sickly sweet honeysuckle scent that drives men to murder.


Also worthy of note is Jean Heather’s very affecting performance as Phyllis’ neglected stepdaughter Lola, the magnificent expressionistic lighting and the sheer ingenuity of the conspirator’s plot. Edward G’s profound, paternal heartache in the final scene, when he lights the dying Neff’s cigarette for the first and last time, is as cute a moment as you're likely to see. In their book Hollywood In The Forties (1968), critics Charles Higham and Joel Greenberg put their fingers on one key reason the film is so effective and it's worth quoting at length: "As in Mildred Pierce, the Californian ambience is all important: winding roads through the hills leading to tall stuccoed villas in a Spanish style 30 years out of date, cold tea drunk out of tall glasses on hot afternoons, dusty downtown streets, a huge and echoing insurance office, Chinese Checkers played on long pre-television evenings by people who hate each other's guts. The film reverberates with the forlorn poetry of late sunny afternoons." 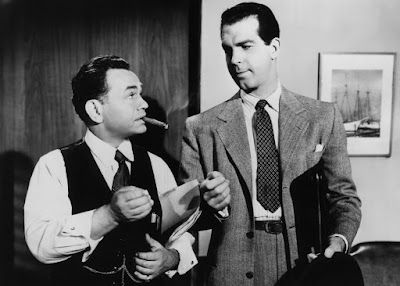 Double Indemnity was based on a 1935 novella of the same name by hard-boiled author James M. Cain, who in turn took inspiration from the real-life case of Ruth Snyder, a New Yorker who was executed at Sing Sing in 1928 for persuading her boyfriend Judd Gray to kill her husband days after the latter had taken out a hefty life insurance policy. Cain had reported on her trial in 1927 while working as a journalist and serialised his story in Liberty magazine eight years later. Cain declared himself delighted with the film adaptation and even applauded Wilder and Chandler for changing his ending, Phyllis going to the chair in Cain's version. A great compliment from a great writer and all the more impressive given that the always-ornery Chandler, then undergoing treatment for alcohol addiction, did not get on at all well with the little Austrian director. Wilder had called him in to replace his usual writing partner Charles Brackett at the last minute after Brackett took exception to the sleazy source material and the pair’s collaboration was, by all accounts, fraught. Chandler did, however, provide Wilder with the inspiration for another masterpiece - 1945’s The Lost Weekend, made to "show Chandler himself" - and appears in a brief cameo in the film, sitting on a bench outside Neff's office.

N.B. Fans of Double Indemnity are advised to check out Steve Martin’s inspired use of Wilder’s film, particularly the Jerry’s Market scenes, in his 1982 noir pastiche, Dead Men Don’t Wear Plaid, directed by Carl Reiner.
Posted by Joe at 12:29 No comments:

Labels: Barbara Stanwyck, Billy Wilder, Crime, Edward G. Robinson, Fred MacMurray, James M. Cain, Miklós Rózsa, Noir, Raymond Chandler
Newer Posts Older Posts Home
Subscribe to: Posts (Atom)
"Other people, so I have read, treasure memorable moments in their lives... What I remember is the time John Wayne killed three men with a carbine as he was falling to the dusty street in Stagecoach, and the time the kitten found Orson Welles in The Third Man"
Walker Percy, The Movie-Goer