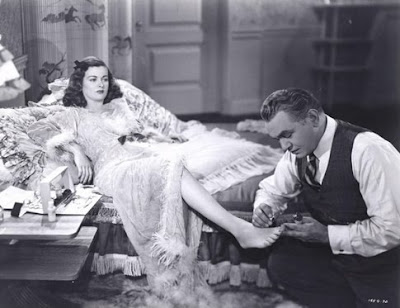 On a rainy night in New York City, lonely, hen-pecked bank teller Chris Cross (Edward G. Robinson) wanders home from a party thrown in his honour by smug boss J.J. Hogarth (Russell Hicks), a gold watch all he has to show for 25 years of loyal service. When Cross stumbles upon a man assaulting a woman beneath a street lamp, he comes to her aid, fending off the attacker with his umbrella. The girl, one Kitty March (Joan Bennett), is not entirely grateful but agrees to have a drink with Chris anyway and he soon finds himself falling helplessly in love with her. When Kitty learns that he enjoys painting and lives in Greenwich Village, she gladly consents to see him again, assuming Chris to be a famous bohemian artist. This could hardly be further from the truth. At home, Cross is emasculated and scorned by his hateful harpy of a wife Adele (Rosalind Ivan), who still dotes on her deceased first husband and sneers maliciously at Chris's hobby, forcing him to set up his easel in the bathroom to escape her viperish philistinism. Kitty's misunderstanding prompts her and abusive pimp boyfriend Johnny Prince (Dan Duryea) to lead the naïve, lovestruck Cross down that well-worn road to perdition, the parasitical pair encouraging him to steal money from the vault at work to fix her up with a swish studio apartment. Worse, Johnny then succeeds in selling Chris's canvases to a noted critic and credits Kitty as the artist. Matters come to a head when Cross finally realises the full extent of Kitty's treachery and manipulation and her masochistic love for Johnny. In an explosive fit of rage, he murders her with an icepick and then allows Johnny to go to the gas chamber in his stead. However, Chris's guilty conscience begins to dog his every step and the poor fellow ultimately finds himself suicidally depressed, destitute and utterly alone. 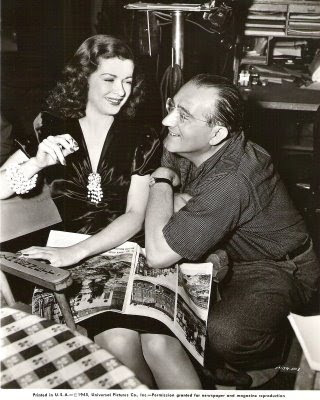 Fresh from The Woman In The Window, Fritz Lang (above with his leading lady) reunited stars Robinson, Bennett and Duryea for Scarlet Street, a devastating noir about a harmless drudge who is destroyed by an ill-advised infatuation. The emotional liebestod of Chris Cross was adapted by Dudley Nichols from Georges De La Fouchardière's novel La Chienne, which had previously been filmed by Jean Renoir in 1931. Bennett makes for a wonderfully earthy, uncouth femme fatale as “Lazy Legs”, Duryea is suitably sleazy and this may well be Edward G. Robinson's finest hour, his performance deeply sad and affecting. As bold and bleak a vision of urban hell as you could wish to find - with some exquisitely stark, gloomy cinematography from Milton Krasner - do yourselves a favour and watch Scarlet Street in its entirety below.
Posted by Joe at 15:34 5 comments:

Labels: Charles Kemper, Dan Duryea, Drama, Dudley Nichols, Edward G. Robinson, Fritz Lang, Joan Bennett, Milton R. Krasner, Noir, Walter Wanger
Newer Posts Older Posts Home
Subscribe to: Posts (Atom)
"Other people, so I have read, treasure memorable moments in their lives... What I remember is the time John Wayne killed three men with a carbine as he was falling to the dusty street in Stagecoach, and the time the kitten found Orson Welles in The Third Man"
Walker Percy, The Movie-Goer