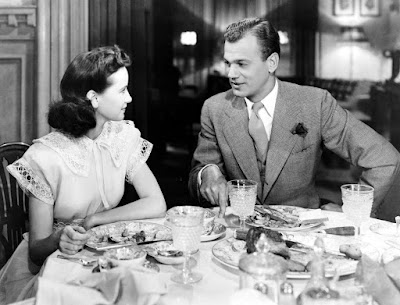 Alfred Hitchock's daughter Patricia always insisted that Shadow Of A Doubt was her father's favourite amongst his own films but the man himself denied this in conversation with François Truffaut, telling the Frenchman that it was merely the film he found easiest to defend with pedantic critics, “our friends, the plausibles and logicians.” Whatever the truth, it's certainly one of my favourite Hitchcock's (right up there with Notorious, 1946, and Strangers On A Train, 1951) and unquestionably a masterpiece. 17 years before Psycho, Hitch made a serial killer his protagonist and over four decades before David Lynch's Blue Velvet (1986), he ghosted in behind the manicured lawns of leafy suburbia to subject a “typical, representative” all-American family to a cruel experiment in evil.

Shadow Of A Doubt opens in derelict wasteland beneath the Pulaski Skyway in Newark, New Jersey, where bums stare out across the water at nothing and skeletons of old cars dot the landscape. Next we cut to a quiet neighbourhood street where the local kids are playing baseball. Joseph Valentine's camera wanders over to a front door and then up, up to the upstairs window of what turns out to be a rooming house, cloaked in shade. Inside Charlie Oakley (Joseph Cotten) lies on his bed fully dressed, listening to the noise below and toying with a cigar. Handfuls of scrunched-up bank notes are scattered across the bedside table and rug. This guy is bad medicine. Charlie's landlady Mrs Martin (Constance Purdy) enters and tells him that two men have been looking for him. He fobs her off, waits for her to leave and then tosses a drinking glass angrily against the basin. Striding out into the street, Charlie walks right passed his two pursuers and proceeds up the pavement without batting an eye. They follow Charlie but he manages to escape into the industrial zone. After this temporary reprieve, the fugitive sends a wire to sunny Santa Rosa, California - the sort of place where even the traffic cops go to work with a smile on their faces - to inform his beloved elder sister Emma Newton (Patricia Collinge) that he's coming to stay. This is joyous news to Emma and her daughter Charlotte, also known as “Charlie” (Teresa Wright), who can't wait to be reunited with their favourite relative. But they're about to find out, just as we have, that there's a great deal more to the handsome, urbane “Uncle Charlie” than meets the eye. Arriving by train, the old devil comes to town in a thick plume of smoke and everyone is delighted - aside from the precocious Ann (Edna May Wonacott) who would rather be reading and bank clerk patriarch Joe (Henry Travers) who is more interested in speculating about the best way to kill a man with his ghoulish neighbour Herb (Hume Cronyn). After the initial greetings, Charlie's act soon begins to unravel, prone as he is to making misanthropic outbursts (some of them conveying Hitch's own dark attitudes towards “horrible, faded, fat, greedy women”). He makes a major mistake in presenting Young Charlie with a second-hand emerald ring engraved inside with a dead woman's initials, something she is instinctively suspicious of and which prompts her to launch an investigation of her own. 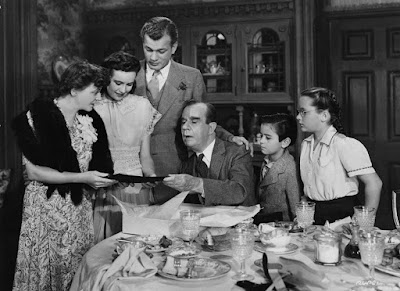 In Vertigo (1958), Hitchcock made the spiral a recurring visual motif. Here it's sharp straight lines - horizontal, vertical and diagonal - that he obsesses over. In Charlie's room at the boarding house, shadows are cast by the window blinds so that they criss-cross his body like prison bars. He wears a pinstripe suit that begins to take on the look of a convict's duds. When he outruns the cops, hiding on a rooftop, the road below noticeably dissects the land at an angle. Then in Santa Rosa it's the white picket fences, telegraph wires, train tracks, wooden floors, stairs and bannisters that cut up and layer the screen. Uncle Charlie's hated world is one of oppressive grids. He feels stifled and bored by conformity, convention and bourgeois concerns and is hungry for transgression ("The whole world's a joke to me"). He wants to break out beyond these suffocating lines and out-pace his past but somehow they just keep on pinning him back. Even when he does get lucky and the cops chase the wrong man into an aeroplane propellor on a runway in Maine, Charlie finds himself hitting the tracks soon after, his own waltz with death finally ceased.

The two Charlies are almost twins – both introduced lying contemplatively on beds, she believing telepathy has brought him to Santa Rosa to relieve her teenage ennui - so it's ironic that it turns out to be Young Charlie who has to bring her namesake down. The experience provides her with a hard lesson and she is less innocent and all the more worldly for her run-in with the Merry Widow Murderer (the camera panning back like a gasp when she discovers the truth from a news clipping in the library is marvellous). Her romance with Jack Graham (Macdonald Carey), one of the detectives on the case, provides her with the consolation that at least one other person knew the real Charles Oakley, the man who tried to execute her, after he has so undeservedly been buried a saint by the townsfolk. Otherwise she wouldn't have been able to share the burden with another living soul for the sake of her poor mother. 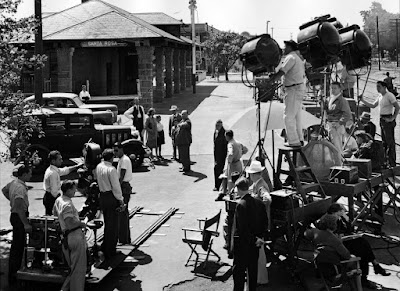 The story for Shadow Of A Doubt came from the real-life case of serial strangler Earle Leonard Nelson, who, like Uncle Charlie, was known to have suffered a childhood accident in which he crashed his bicycle into a streetcar, after which he began to behave extremely erratically and went on to kill at least 20 women during the mid-twenties. Gordon McDonell, a novelist married to the head of David O. Selznick's story department, thought Nelson's case would make a good subject for a film and met Hitchcock for lunch at the Brown Derby one day to discuss the idea. The director saw great potential in it and hired playwrights Thornton Wilder (Our Town, 1938) and Sally Benson (Junior Miss, 1941) to work on the screenplay, with later revisions made by his own wife Alma. Wilder was eventually called up for military service and Hitch had to accompany him on the train all the way to a training base in Florida just to get his chubby digits on the last few pages of script. Hitch originally wanted to cast William Powell in the lead but MGM refused to loan him out. However, Powell did get to play the part on Cecil B. DeMille's Lux Radio Theater in January 1944, as did Cary Grant in 1950 for the Screen Directors Playhouse. The magnificent Joe Cotten reprised his Uncle Charlie for the Screen Guild Theater in 1943 and 1948.
Posted by Joe at 15:07