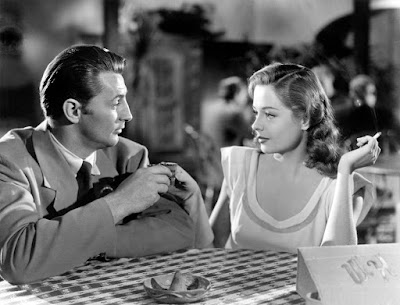 “You're no good and neither am I. That's why we deserve each other.”
- Kathie Moffat

A stranger (Paul Valentine) pulls in at Jeff Bailey's gas station in sleepy Bridgeport, California. He asks Jimmy, the deaf-mute kid (Dickie Moore) on the forecourt, where the owner is. Jimmy plays dumb. The man crosses the street to Marny's Café, pulls up a stool and orders coffee with cream, listening to the hostess's gossipy chatter. He claims to be an old friend of Jeff's just passing through town but somehow we're not so sure. Returning to his car, he finds a wary Jeff (Robert Mitchum) returned from the river bank, lugging his rod and tackle box. “Hello Joe.”

So begins a journey that will take the secretive Jeff Bailey back into a past he thought he could leave behind, back into the clutches of the vicious racketeer he once betrayed who never forgets. On the long night drive up to Whit Sterling's (Kirk Douglas) mansion at Lake Tahoe, Jeff spills the beans to his wholesome, loving girlfriend Ann Miller (Virginia Huston) and we cut to a flashback. Before Bridgeport, Jeff was a low-rent private eye named Markham, not Bailey, who had been called in by Sterling to find Kathie Moffat (Jane Greer), the moll who shot him and left him for dead minus $40,000. Jeff traced her to Acapulco, Mexico, where, one fine day, she walked into his life, straight out of a sunbeam. Instead of turning her over to Sterling, Jeff drinks bourbon with her at Pablo's, takes her for midnight walks along the beach and falls in love, the pair eventually escaping together back to San Francisco. All goes well until the lovers happen to run into Jeff's jilted ex-partner, “a stupid, oily gent” named Jack Fisher (Steve Brodie), at a racetrack by chance. He tries to blackmail them. After a fist fight with Jeff, Kathie shoots Fisher and that's where they parted. Now Whit has the tax man investigating his past and he wants Jeff to undertake one final job to clear the outstanding debt. But are things really that straightforward? Kathie is back with Whit now, so the odds are against it. 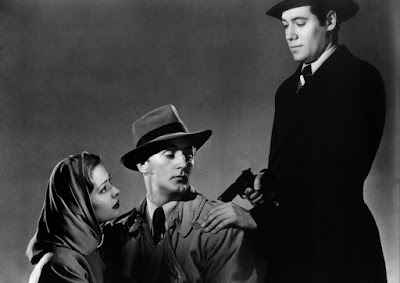 Horror specialist Jacques Tourneur directed this archetypal noir for RKO from a novel by one “Geoffrey Homes” called Build My Gallows High (1946). The author's real name was Daniel Mainwaring and it's he who was responsible for the adaptation, with uncredited revisions made by Frank Fenton and pulp maestro James M. Cain. There's some truly great hard-boiled narration and dialogue on show (“Let's go down to the bar. You can cool off while we try and impress each other”) and the plot construction is amazingly intricate. You really have to pay attention here, especially during the San Francisco sequence in which Whit tries to entrap Jeff in the murder of two-bit accountant Leonard Eels (Ken Niles). On top of that you get Mitchum in a grubby trenchcoat at his laconic, fatalistic best, baby-faced Jane Greer as a .45-toting femme fatale to rival Brigid O'Shaughnessy (“You're like a leaf that the wind blows from one gutter to another,” sneers Mitchum), a magnificently reptilian Kirk Douglas and a bevy of beautiful, long, hanging shadows from cinematographer Nicholas Musuraca. There are also two memorable deaths to speak of: Joe reeled in off the top of a waterfall after finding himself snagged with Jimmy's hook, pulled crashing down to infinity on the rocks below, and Kathie's, taken out by a spray of machine-gun bullets as she returns fire from the passenger seat of a moving car with a dead man slumped behind the wheel. The end is also very moving, in which Ann is comforted by Jimmy's assurance that Jeff had intended to run away with Kathie after all, hoping to recreate those idyllic days in Acapulco – a half-truth that, without any further explanation of its extenuating circumstances, becomes a betrayal to set her free from mourning, from becoming ensnared by the past herself. Mitchum and Greer would be reunited for The Big Steal in 1949 but, trust me, it doesn't get much better than this.
Posted by Joe at 13:11