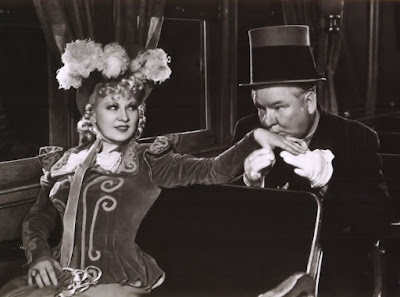 W.C. Fields has a crack at the Old West. In more ways than one.

When Flower Belle Lee (Mae West) is exiled in disgrace from the town of Little Bend for fraternising with the infamous Masked Bandit, she takes a train to Greasewood City on which she meets a sauntering conniver named Cuthbert J. Twillie (Fields), whom she marries on the spot with the help of a crooked gambler posing as a reverend (Donald Meek from Stagecoach, 1939) after spying his carpet bag filled with bank notes. However, Flower Belle soon learns that the greenbacks in question are mere facsimiles, vouchers for bottles of Twillie's “Famous Lizard Oil Hair Tonic and Corn Cure” and that her ersatz husband is really a small-time huckster and purveyor of “Novelties and Notions.” Prowling the gambling tables of the town's Last Gasp saloon, Twillie is soon evicted for cheating. However, when local bigwig Jeff Badger (Joseph Calleia) gets a look at his voluptuous lady wife, he hurriedly appoints him sheriff – a job with an unusually high mortality rate in Greasewood. 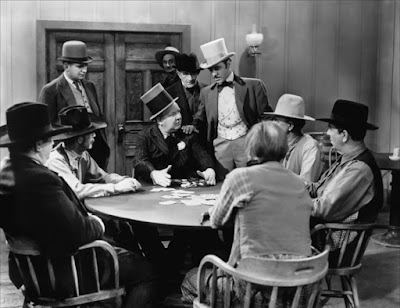 West and Fields, who had had adjacent dressing rooms at Paramount during the glory days of the early thirties, were finally teamed up at Universal in 1940 when both were arguably somewhat past their prime. Nevertheless, the duo, previously considered incompatible comedically, collaborated on a screenplay with West claiming to have written the bulk of it, leaving gaps for Fields to fill in his own comic bits, something he is said to have worked out on the back of a torn envelope (as he did with The Bank Dick, 1940). Producer Lester Cowan, who had overseen Fields' last team-up, with Edgar Bergen and Charlie McCarthy in the circus-set You Can't Cheat An Honest Man (1939), was brought in to supervise while the director was Edward F. Cline, another (uncredited) veteran of that film and a former Keystone man who claimed to have invented the Bathing Beauty. Fields had worked with Cline twice previously and would do so twice more but there was still some animosity between them, according to Fields' biographer Robert Lewis Taylor, who claimed the comedian was unable to resist mocking a director whom he regarded as ludicrously old fashioned and out-of-step. Fields would apparently treat “every suggestion [Cline] made as a pure distillate of obsolescent corn”, capering around the set, billowing an invisible cape and raising his eyebrows in overblown theatrical fashion to satirise him. Fields would also prove a nuisance to Mae West, who soon grew tired of his incessant, Martini-induced attempts to woo her off-camera: “Bill's a good guy but it's a shame he has to be so god-damned cute”.

Upon the finished film's release, Newsweek worried that the two stars were “diametrically opposed” because West dealt primarily in innuendo and deft wordplay while Fields regarded a script as “a necessary evil, to be ignored at the spur of any moment in favour of the hair-trigger ad-libbing that is the essence of his humour”. Although the periodical conceded that the predicted “war of temperaments” never materialised, it ultimately concluded that My Little Chickadee “isn't the comedy riot it promised to be”, a fair assessment that still rings true today. It is a highly flawed outing rather in the spirit of Laurel and Hardy's Way Out West (1937) but one that's impressively staged and shot and there are plenty of nice moments. Mae's shoot-out with the Injuns for one, her mathematics lesson at the schoolhouse for another. Fields meanwhile goes to bed with a goat by accident, battles a feather boa with a fork and gets to make wildly inventive use of his preposterous vocabulary. In search of Flower Belle he asks for “yon damsel with the hothouse cognomen”. When she shuts him out of the bridal suite, he exclaims, “Egad! The child's afraid of me – she's all 'atwit!” Another fine example is the lengthy bar-room anecdote below about the time he knocked down Chicago Molly, “a tough paloma” who threw a “melange of hot lunch” in his face one day on New York's Lower East Side.

There are recurring Fieldsian themes evident in My Little Chickadee – not least his frustration with women – but the price of West's appearance is that it forces him to play the lecher, a demand that sits uneasily with his familiar blowhard persona (though he did repeat this bit of business in the following year's madcap Never Give A Sucker An Even Break, prowling around a mountaintop after Margaret Dumont's naive daughter). He's clearly much happier glugging “sheep dip” under the disapproving eye of town busybody Mrs Gideon (Margaret Hamilton, the Wicked Witch of the West) than trying to seduce Mae in an ill-fitting nightie. However, the fact that he keeps his sheriff's badge pinned on to this ridiculous garb is a neat summation of his attitude towards a position of authority he has obtained by fraud. As a Western, My Little Chickadee features lawless towns, gushing steam trains, a gun battle, an attempted hanging, racism towards Indians (Fields repeatedly referring to his stoical, blanket-wearing Man Friday as a “red rascal”) and a pioneering newspaperman (Dick Foran) determined to bring civilised values to Greasewood some years before Dutton Peabody picked up a pen in The Man Who Shot Liberty Valance (1962). As for the ending, in which West and Fields part company by swapping catchphrases, it's as nicely judged and respectful a moment as you could wish to see.
Posted by Joe at 14:59