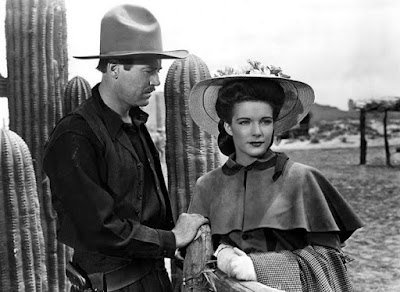 Arizona, 1881. Young James Earp (Don Garner) lies stricken, face down in the mud, twin shotgun shells buried deep in his spine. The fire's been doused by torrential rain, which keeps on coming. An unwashed cooking pot stands neglected, filling up with water. The Earps' scrawny herd has disappeared, rustled by the killer and his posse, leaving the range completely deserted but for the returning brothers appearing over the horizon. Stooped inside their slickers and peering out into the night, these three men are entirely unaware of the tragedy that awaits them. Their kid sibling, slain at 18. He'll never get to give his girl the gold trinket he's been saving up for.

On finding James's body, Wyatt Earp (Henry Fonda), former marshal to Dodge City turned cowpoke, heads straight back to Tombstone and accepts the mayor's offer of a job after all. Pinning on the tin star once more means that Earp is able to pursue a personal investigation into the murder through public office, with surviving brothers Morgan (Ward Bond) and Virgil (Tim Holt) sworn in as deputies. His motive becomes a mission to bring order and civilisation to this “rough lookin' country” so that “kids will be able to grow up and live safe.” He's already had his own wild trail beard shaved off, kicked a meddlesome drunken Indian off the land (ahem) and put Mexican good-time girl Chihuahua (Linda Darnell) in her place - the horse trough. Next on his agenda is the town's unofficial lawman, the enigmatic man in black Doc Holliday (Victor Mature). Riddled with tuberculosis, bitter self-loathing and decadent Eastern manners and culture, this Doc is sick and determined to drink himself to death. He sneers and tosses a shot glass on seeing his reflection in the frame of his diploma, smashing it to pieces, and later fails in an attempted operation to save Chihuahua from a nasty bullet wound. “A man could almost follow your trail from graveyard to graveyard,” observes Wyatt and the remark proves prophetic – it'll end in Doc's own. Their battle for supremacy forms the core of John Ford's film – the run-ins with Walter Brennan's degenerate Clanton clan only really serving as bookends. Earp and Holliday end up forming a kind of coalition government, built on the consensus that the centre must be protected from extremists like the bull whip-wielding Old Man Clanton so that the civilised values they share may be allowed to flourish and prosper.


And sure enough they succeed, even if the gunfight at the O.K. Corral means Doc's last stand. A new church is under construction with the scent of fresh-cut lumber in the air, the pioneering Bon Ton Tonsorial Parlor is doing a roaring trade in honeysuckle blossom cologne (“Sweet smellin' stuff!”) and the unspoiled Clementine Carter (Cathy Downs), having battled her way through every mining town and cow camp between here and Boston only to be scorned by Holliday, has settled in and intends to set up a school. You can even hear Shakespeare in Tombstone, so long as that “eminent actor" and "sterling tragedian” Granville Thorndyke (Alan Mowbray) happens to be holding court, back by popular demand at the Bird Cage theatre or held hostage by “tavern louts” at the local saloon. Doc's even had Mac the bartender (J. Farrell MacDonald) serving up champagne, if you can believe it. With the Clantons wiped out and Doc and Chihuahua gone, the West is won, Wyatt's mission is complete and James Earp can rest in peace. 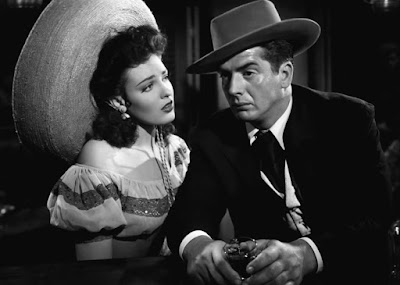 “I knew Wyatt Earp... and he told me about the fight at the O.K. Corral. So we did it exactly the way it had been,” said director Ford in typically matter-of-fact fashion. This famous historical episode has been re-enacted many times on screen but never better than here and, really, how many directors could lay claim to that level of expert, eye-witness testimony, even if Ford and screenwriters Samuel G. Engel, Sam Hellman and Winston Miller did take a few liberties with the truth? Apparently Ford met the real Earp (1848-1929) during the silent era when he was working as a prop boy on the same Western the great gunslinger was advising on - the young Ford plying Earp with fresh coffee to get the facts about the shoot-out. Though the real-time reconstruction of it in My Darling Clementine is impressively handled, it's the film's topical subtext that would have resonated most with audiences upon its release in 1946, as Peter Biskind explains:

“While the relation of films to their immediate historical context is often oblique, here it is not. Earp is the ex-marshal of Dodge City. Like returning GI's, he has put down the gun in favour of pacific pursuits. He finds, however, that he has been premature, that before Tombstone (read, the home front) can be made safe for kids (read, democracy), he has to pick up the gun once again, in much the same way that both corporate liberals and conservatives alike basically agreed on the necessity of remilitarising America for the Cold War.”

Fonda, fresh out of the US Navy, was thus the perfect choice to add authenticity to this most all-American of roles. Here he is in one of my favourite exchanges from a brilliant movie: