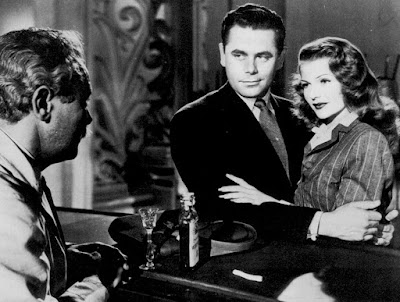 “I hated her so I couldn't get her out of my mind for a minute.”
- Johnny Farrell

American drifter and gambler Johnny Farrell (Glenn Ford) is saved from a waterfront mugging in Buenos Aires by a mysterious German gentleman with a spring-loaded cane. The stranger turns out to be Ballin Mundsun (George Macready), owner of a local casino, who offers Johnny a job as his right hand man. The pair become inseparable until Ballin disappears on a trip and returns with a “surprise”, a new bride on his arm in the shape of walking powder keg Gilda (Rita Hayworth), who just so happens to be an old flame of Johnny's. What follows is one of the most twisted psycho-sexual melodramas ever put before the public as the trio become embroiled in a decidedly unhealthy and abusive ménage à trois, stuffed with sado-masochism, emotional torture and bitter jealousy from all angles. With sexual tension descending on the gambling hall like a thick ocean fog, it's a small wonder that anyone can make out the roulette wheels clearly enough to place their bets. 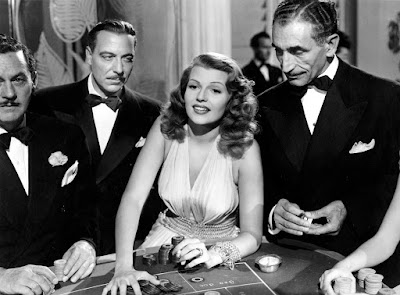 The phlegmatic Mundsun appears to take pleasure in Gilda's lies about where she goes at night and obvious dalliances with other men, savouring the heartache of being made a cuckold by this most destructive of femme fatales, a girl he has put on a pedestal and made a goddess for that very purpose. This icy masochist almost certainly relishes the thought of having Johnny, the virile surrogate he has appointed to be Gilda's guardian, take her “swimming,” having after all “bought” the pair of them for his personal amusement. Johnny is equally sexually ambiguous - clearly happiest in the days before Gilda's arrival when he first entered Ballin's world with an agreement that “women and gambling don't mix.” “You must lead a gay life,” he says to his employer early on, after Ballin refers to the concealed blade inside his phallic walking stick as his idea of a “friend,” an item Johnny is instinctively attracted to for the violence and decadence it promises and represents. He can be misogynistic (“Statistics show that there are more women in the world than anything else. Except insects”) and his hatred of Gilda soon becomes an all-consuming passion – sparked either by her past rejection of him, her barbed taunts now or her disruption of his comfortable partnership with Ballin. The feeling is mutual. “I hate you so much that I would destroy myself to take you down with me,” breathes Gilda. Ballin soon notices their animosity and observes, “Hate can be a very exciting emotion. Very exciting... There is a heat in it, that one can feel.” He sympathises: “Hate is the only thing that has ever warmed me.” Gilda feels that warmth too, enjoying the intrigue and anger she creates all around her more than the material wealth and pretty decorations she has acquired in marrying Ballin for his money. Gilda knows and accepts that the men in her life treat her like an expensive object and exploits the appreciative roar of the crowd. But it's Johnny's burning, lustful hatred that really excites her and such dangerous games can't go on for ever.
Two of Gilda's minor characters prove the most acute observers of this most corrosive of love triangles. Uncle Pio (Steven Geray), the dryly philosophical washroom attendant with a “worm's-eye view” on proceedings, senses the deep loneliness behind Gilda's carnival mask and tells her: “You smoke too much. I notice only frustrated people smoke too much and only lonely people are frustrated.” Johnny Farrell also chain-smokes throughout the film. He too is in dire need of a hug and it's Uncle Pio who finally breaks up the trio for good when he stabs the vengeful, resurrected Ballin so that Johnny and Gilda can go straight. Joseph Calleia's ever-watchful Detective Obregon makes the pithiest summary of their tortuous relationship: “You two kids love each other pretty terribly, don't you? It's the most curious love-hate pattern I've ever had the pleasure of witnessing.” Amen brother. There never was a woman like Gilda.

Rita Hayworth never forgave producer Virginia Van Upp for forever dooming her to be typecast as Gilda, a fantasy role no mortal woman could ever hope to live up to. “Every man I knew went to bed with Gilda and woke up with me,” she famously lamented. However, Gilda ensured her place among the true gods of the screen and proved a box office smash with returning servicemen who longed to see more of the pin-up girl that got them through the war. Hayworth didn't disappoint, tossing her hair and vamping it up with the best of them. “Decent? Me?” The script was written by Jo Eisinger and Marion Parsonnet from an original story by E.A. Ellington with contributions from an uncredited Ben Hecht.
Posted by Joe at 13:51