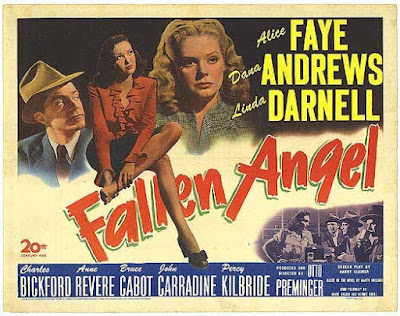 After Laura (1944), Otto Preminger returned with this underrated but less successful noir, again with Dana Andrews, cinematographer Joseph LaShelle and composer David Raksin on board. While all are on good form (check out LaShelle's use of Venetian blinds in the lighting of Andrews and Linda Darnell below), the end result is something of a poor man's Postman Always Rings Twice (1946). 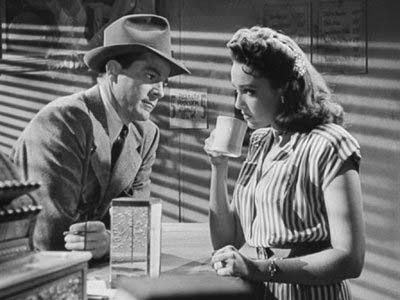 Andrews plays Eric Stanton, an out-of-work press agent and world class bastard who is kicked off a bus in small-town Walton, California, with nothing but a lonely dollar and a handful of moths in his trouser pocket. There he meets Stella (Darnell), a bad news waitress at a beach-side diner called Pop's Eats, whom half the men in town appear to have a stake in. Stanton fancies a piece of the action himself and decides to stick around. Stella is the sort who steals from the cash register and is on the look-out for a man who can give her security, stability and a nice home, far away from the hamburger grill and coffee pots. Stanton can't offer that. Not yet. In order to rustle up the dough, this utterly shameless professional huckster hatches a plan to sweep wealthy, bookish local spinster June Mills (Alice Faye) off her feet, then hustle her into a shotgun marriage and ditch her in time to set up shop with Stella on the Mills nest egg. However, when the latter is suddenly murdered on Eric's wedding night, he finds himself the prime suspect and is forced to take his angelic new bride on the run. They hole up in a shabby hotel in Frisco and only then does Stanton realise where his loyalties and affections really ought to lie.

The repeated use of a Raksin song, 'Slowly' (seemingly the only record available on the jukebox at Pop's diner), is a fairly clear indication that Preminger was aspiring here to repeat Laura's formula for success – that film spawning the hugely popular 'Theme from Laura'. Sadly, although Fallen Angel shares its predecessor's focus on the sudden death of a desirable woman and a subsequent investigation into her many suitors, it lacks Laura's delicate characterisation – preferring much broader strokes. The juxtaposition of raunchy, smouldering Darnell with the wholesome musical actress and radio personality Alice Faye, for instance, is heavily hammered home. Nominal star Faye was so disgusted with the final cut – which Fox head Darryl F. Zanuck had meddled with to ensure Darnell was given a more prominent role – that she sped off the studio lot, tossed her dressing room key to a security guard and didn't return to the screen for another 16 years. Andrews though has plenty to get his teeth into. Eric Stanton is a marvelously unscrupulous cad, desperate and devious, just as happy pushing tickets for "Psychic Extraordinary" Professor Madley (John Carradine) and his spurious “spook act” as marrying a virginal church organist for her money. Stanton's eventual antagonist, meanwhile, grizzled ex-New York City cop Mark Judd (Charles Bickford), is a clear forerunner of Andrews' Mark Dixon in Where The Sidewalk Ends (1950), a sadist who dons kid gloves to beat a confession out of his suspects. Also worth mentioning are Percy Kilbride as the kindly Pop, in love with Darnell and always willing to think the best of her, even when all evidence points to the contrary, and Anne Revere as June's elder sister Clara, who sees through Stanton but can't bring herself to stand in the way of June's chance at happiness. 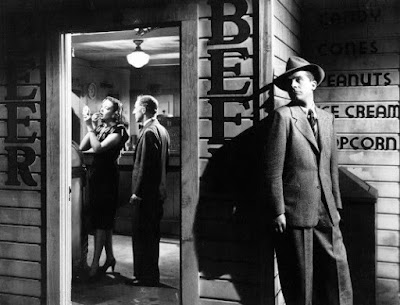 Fallen Angel is better than its reputation might suggest although the whodunnit ending is somehow not as satisfying as it might have been. Harry Kleiner's screenplay was derived from a novel of the same name by the mysterious Marty Holland, of whom little is known beyond the fact that "he" was a woman named Mary and that another of her books, The File On Thelma Jordon (1949), was turned into a film by Robert Siodmak in 1950 starring Barbara Stanwyck.
Posted by Joe at 11:19