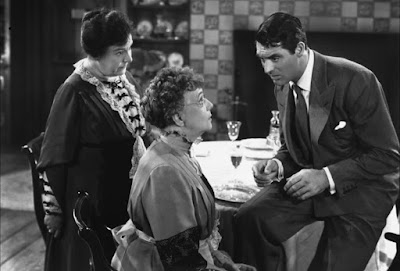 Halloween night, Brooklyn. Newly-married drama critic Mortimer Brewster (Cary Grant) dashes home to tell his beloved maiden aunts (Josephine Hull and Jean Adair) the good news before zipping off to Niagara Falls on his honeymoon with bride Elaine (Priscilla Lane), daughter to the stuffy reverend next door. However, when Mortimer happens to idly open up the window seat in his aunts' living room, he finds a corpse there staring glassily back at him. Horrified, he learns that this is in fact the twelfth or possibly thirteenth lonely old man the spinsters have done away with (“A very bad habit”), poisoning them with elderberry wine as an act of “mercy” and burying them in the cellar with the aid of Teddy (John Alexander), Mortimer's insane, bugle-blowing brother who believes himself to be 26th President of the United States Theodore Roosevelt, digging graves for yellow fever victims at the Panama Canal. Frantically trying to work out what to do, Mortimer is then confronted by two more serial killers - his other brother, the violently unstable Jonathan (Raymond Massey) and his accomplice, Dr Einstein (Peter Lorre), a schnapps-slugging renegade plastic surgeon who has inadvertently made Jonathan over to look like Boris Karloff after seeing a certain movie. Total madness descends as the lights go out, involving the Brewsters, Elaine, several misplaced bodies, a gaggle of Irish cops with literary ambitions and the arrival of Mr Witherspoon (Edward Everett Horton), director of the Happydale asylum, a “rest home” where just about everyone involved would clearly be better off. And, on top of all that, the cab driver outside still hasn't been paid. 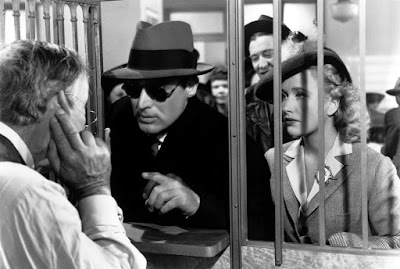 Frank Capra completed this macabre screwball farce in 1941 but it wasn't released until three years later when Joseph Kesselring's hit play had finished its Broadway run. Hull, Adair and Alexander all reprised their stage roles but Massey was called in as a replacement for the real Boris Karloff, whose casting on stage had made a self-referential joke out of Jonathan Brewster's sinister, scarred appearance. Sadly this may be Cary Grant's least successful comic performance, a hysterical, hyperactive turn full of wild mugging and cartoonish double-takes. Naturally he looks as sharp as ever and is certainly game for the material but ultimately his incessant wackiness comes across as a little too much. The rest of the cast are all nicely suited to their wide-eyed character parts and there's plenty of pleasing black humour on show. Here's director Capra having some fun on set with a bound and gagged Grant, just after a narrow escape from one of Lorre's “operations.” 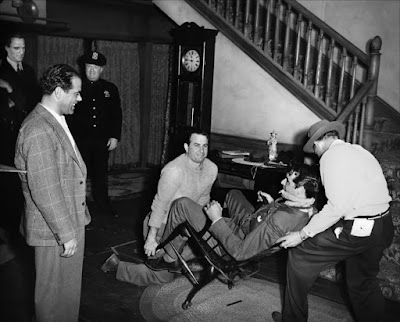