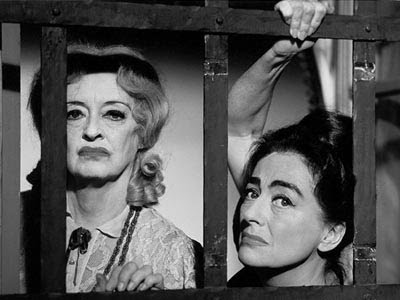 Davis is utterly terrifying, a violent, alcoholic crone dreaming of trumping her sibling one last time with an ill-advised comeback, refusing to acknowledge that tastes have changed. Caked in make-up, systematically depriving her charge of resources, stealing her fan mail and roasting canaries and rats, Davis's performance must surely have been an important touchstone for every actor playing the Joker since its release. The scenes in which she rolls her beady eyes and cruelly, childishly impersonates Blanche, usually to get what she wants over the telephone, are just chilling. Pure evil. Davis would continue in this vein thereafter, coming to London to shoot The Nanny, another psychological horror, for Hammer in 1965. Crawford meanwhile is more restrained as the perpetual victim, who equally fails to accept reality and see her troubled control freak of a sister for what she really is. Robert Aldrich's film has been called the meeting of Hollywood's top sadist with its leading masochist and perhaps that's what makes Baby Jane such an interesting grudge match. In an industry that too rarely finds meaty roles for mature women, its astonishing to see these two stars playing out such a troubling vision of stunted femininity and generously riffing on their own screen personae in the process.

Baby Jane also has two strong supporting turns of note: the hulking Victor Buono as Edwin Flagg, a chancer with oedipal issues of his own whom Jane hires to accompany her twee vaudeville songs and Maidie Norman as Blanche's no-nonsense nurse Elvira, who suspects what's really going on but meets a grizzly end before she can intervene, not unlike Dick Hallorann (Scatman Crothers) in The Shining (1980). 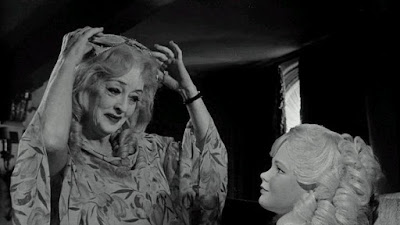 Ultimately, What Ever Happened to Baby Jane? is (perhaps appropriately) a trashier, post-Psycho sister to Sunset Boulevard (1950). Some of source novelist Henry Farrell's sub-Tennessee Williams insights have dated badly and it is unquestionably a touch overlong. The ending in particular in which Jane drags the half-starved Blanche to the beach to die in the sun feels a little anti-climactic after the operatic nastiness that has gone before. Still, it's bold in its ugliness and remains a macabre, claustrophobic little creep show. This is real horror - Baby Jane is not about monsters skulking in Central European castles, alien invaders, giant bugs or masked serial killers stalking the suburbs - just one person being spiteful to another in their own home. Anyone with a fear of dolls or who has ever been part of a bickering, competitive family will find uncomfortable resonances here. The human reluctance to accept the tragedy of ageing and losing one's youthful looks, of growing old and frail without having realised our most deeply yearned-for fantasies, is also about as universal a theme as you could wish for. The abuse of a disabled dependent by their carer, meanwhile, is another fascinatingly sinister plot point, which would also be exploited to great affect in Misery (1990), another Stephen King parallel.

The California Gothic Baby Jane continues to find a cult following, stereotypically among gay audiences who are said to revel in Davis's savage diva act and the much-mythologised off-screen cat fighting (although biographer Shaun Considine insists that most of the legends are true - Davis really did kick Crawford in the head, for instance, an injury that required several stitches). Whatever, Baby Jane remains endlessly referenced and parodied.
Posted by Joe at 09:34