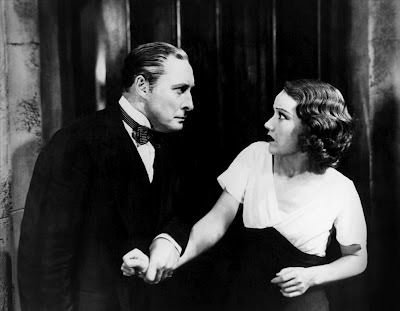 Bargain basement studio Majestic Pictures Inc. produced this cheapo horror to capitalise on the popular screen pairing of British thesp and noted swinger Lionell Atwill with Fay Wray, the “scream queen” the big ape would fall for in Merian C. Cooper and Ernest B. Schoedsack's King Kong (1933). Atwill and Wray had starred together at Warner Brothers in Doctor X (1932) and Mystery Of The Wax Museum (1933) so while the latter film was in post-production Majestic moved quickly to knock out another vehicle for the duo, calling up Universal to rent out their German village set from James Whale's Frankenstein (1931) plus the interiors from that director's more humorous The Old Dark House (1932) with Boris Karloff, Charles Laughton and Melvyn Douglas. Douglas must have stowed away in one of the Universal delivery trucks as he appears here too as the sceptical hero in love with Wray.

The finished Vampire Bat, directed by Frank S. Strayer, concerns a series of mysterious deaths by blood letting in the German town of Kleinschloss. The superstitious locals suspect a plague of vampire bats to be responsible for the spate of pierced jugulars but rationalist Inspector Karl Brettschneider (Douglas) thinks otherwise, pointing out that vampire bats are native only to South America, an inconvenient truth rarely admitted in Gothic schlockers of this sort. An angry mob soon rounds on local simpleton Herman Gleib (Dwight Frye), a jabbering nitwit with a fascination for bats, but Brettschneider remains unconvinced. The doc called in to act as coroner, Otto von Neimann (Atwill), meanwhile continues to promote the vampirism theory and pins the blame on Herman. But what is this man of science really up to? What is that pulsating bath sponge thing he keeps in the bell jar? Why is he secretly trying to hypnotise people? And why does he insist on drinking strong coffee at 10pm every night? Only Karl and his girlfriend, von Neimann's lab assistant Ruth (Wray), can find the answers.


Hardly original but with plenty to enjoy, Strayer's film is a real “talkie” in the most literal sense. There's very little action to speak of beyond the scene in which Herman is hounded to his death by torch-wielding villagers (shot on location in the caves of Bronson Canyon, the same location as Phil Tucker's Robot Monster, 1953) and even then his staking occurs off camera. The Vampire Bat consists instead almost entirely of scenes in which the actors pace up and down the creaking old house exchanging theories - with varying degrees of subtlety. Atwill, Douglas and Wray all do their schtick nicely enough but Lionel Belmore as the bürgermeister serves his lines with more ham than a supermarket deli. Maude Eburne does provide a very welcome change of tone in the comic relief slot as Wray's hypochondriac maiden aunt Gussie. Dwight Frye meanwhile was a noted character actor of the period who specialised in horror and had appeared in Tod Browning's Dracula (1931) as Renfield opposite Bela Lugosi and also pitched up in both Whale's Frankenstein and Bride Of Frankenstein (1935). He died in 1943 aged just 44 after suffering a heart attack on an L.A. city bus but was later “immortalised” in 1971 as the misspelt subject of Alice Cooper's song 'The Ballad Of Dwight Fry'.
Posted by Joe at 11:45