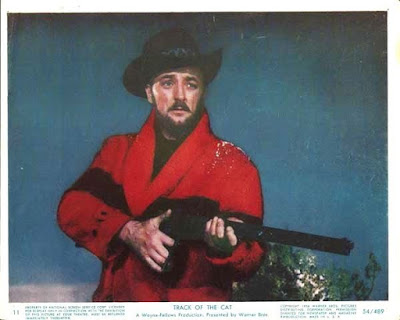 Oh dear. Track Of The Cat is an absolutely god awful, bum-numbingly boring Western in which Big Bob Mitchum heads out into the deep snow of the Colorado mountains in search of the titular “black painter” that has been picking off his cattle. Doesn't sound so bad, right? Well that's only the half of it. While bully boy Mitchum is out hunting the unseen feline, his dysfunctional family are busy thrashing out an unbelievably tedious and clichéd psychodrama of epic proportions, screeching at one another across the kitchen table and airing long-cherished resentments about mother's loveless religious zealotry, pa's boozing and young Harold's (Tab Hunter) reluctance to stand up for himself. Voice of reason Teresa Wright (so good in Hitchcock's Shadow Of A Doubt, 1943) wanders around as an old maid sister imploring people to overcome their repressions and express themselves while Harold's girl Gwen (Diana Lynn) lusts after Mitchum's manly insolence and urges the meeker brother to fight his own battles. Sensitive middle sibling Arthur (William Hopper) meanwhile is slain early on by the panther but it's a good hour later before the quarrelling Bridge family have gotten it together enough to bury the poor bastard, so absorbed are they in their own angst. Yea gods. Anthony Mann can't have lost much sleep.

The turgid sub-Tennessee Williams/Ibsen bickering aside, the mountain-top ranch setting and snowy locations shot by William H. Clothier in “Warner Color” are unusual and occasionally very beautiful while Roy Webb's score carries more than its fair share of the dramatic burden. It was clearly an off day for the costume department, however. Mitchum and Hopper look absurd in their winter coats – the former's being a thick red hunter's jacket with a black Charlie Brown stripe across the middle, the latter's a furry cow hide duffle coat complete with hood. Two obvious Christmas presents if ever I saw them. When Hopper gets killed, Mitchum adopts the cow coat for himself and bobs his way down the mountainside in snowshoes and the spectacle of his wading gait is utterly ridiculous. It should be tragic when the big man realises he's lost his lunch box but his blubbing is less than convincing and the scene in which three timely gusts of wind blow out his last matches one by one is laugh out loud funny. So too is his burning of the volume of Keats he finds inside his late brother's coat pocket. Yeah, take that Keats. 'Posthumia' my arse. And the final insult? There is no cat. All we get is some off-screen growling and a couple of POV shots, including one in which the hapless Hopper recoils in horror as he is mauled to death. When the previously spineless Tab Hunter (inevitably) bags the blighter with his rifle, we don't even get to see the body. Just some predictable cod-mystical pidgin English jibbering from Joe Sam (Carl Switzer), the ageless Injun who looks unfortunately like Keith Richards with a hangover. Come on guys, this is 1954, the golden age of B-movie schlock. Couldn't you at least have rented a stuffed one? 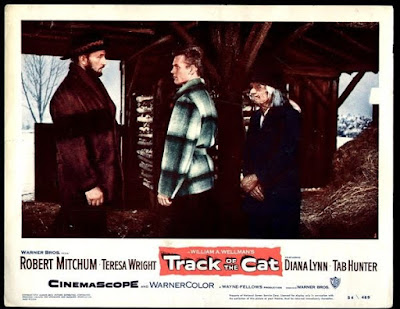 Track Of The Cat was experienced director William A. Wellman's second crack at a Walter Van Tillburg Clark novel, after shooting The Ox-Bow Incident with Henry Fonda, Dana Andrews and Anthony Quinn in 1943. Wellman's adaptation of Clark's 1949 novel Track Of The Cat was scripted by A.L. Bezzerides and produced by actor John Wayne and Robert Fellows. I understand the novel has a good revenge-of-nature theme going for it, in which the cat represents Joe Sam's spirit guide taking vengeance on the Bridges for claiming land that isn't theirs, but the film completely fails to dramatise this. Or indeed Mitchum's realisation that his hunter has become the hunted. Or his death, in which he falls into a ravine while running away in a mad fit of panic and cowardice, which is way too abrupt and anticlimactic after the painful slowness of the ranch scenes. To be fair to the director, there are some interesting technical flourishes on show, like having Arthur's funeral shot from the perspective of a body lying within the hillside grave. Beulah Bondi is also very good, if somewhat repellent, in her role as the holier-than-thou matriarch (she usually played Jimmy Stewart's mother on screen), while Englishman Philip Tonge deserves a mention for trying to inject a touch of levity into proceedings as the dipso dad with half bottles of Scotch stashed all over the house. Peter Biskind once observed that, “Shaving scenes in Westerns are always an index of the degree to which civilisation has taken hold.” When Tonge picks up a razor in his first scene, this civilising ritual acts as a red herring to wrong-foot the audience and those around him – his retired miner is all wilderness and pain beneath the sozzled surface.
Posted by Joe at 13:23