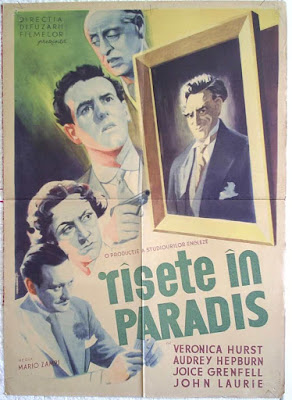 After aged practical joker Henry Russell (Hugh Griffith) croaks while setting his nurse's newspaper on fire, his heirs gather for the reading of the will. Each stands to inherit £50,000 on the condition that they complete a specific task tailored for their personal improvement. Miserly old maid Agnes (Compton) must spend a month working as a housekeeper, mild-mannered Deniston (Sim), an author of penny dreadfuls under various pseudonyms, must get himself arrested and spend 28 days behind bars, meek bank clerk Herbert (Cole) is instructed to execute a hold-up and despicable cad Simon (Middleton) has to marry the first woman he meets. Simple.

The trouble here is that the script by Michael Pertwee and Jack Davies is too elaborate and requires that the film be split into four separate story strands of varying degrees of interest. Agnes's Scrooge-like redemption from trout-faced harpy to reformed character is touching enough but seems to belong to another film entirely while Middleton is simply very unappealing as a society parasite and poser living beyond his means with the aid of an ever-resourceful Jeevesian butler. Terry-Thomas must have been otherwise engaged. A shame really as there's some wonderful dramatic acting on show from Sim, Eleanor Summerfield and Joyce Grenfell in a weird love triangle. Summerfield is the adoring secretary who dutifully taps out Deniston's cheapo novels with titles like Death & The F.A. Cup, The Bank Bandit and Blood Lust and believes in this compromised middle-aged fool (Sim had previously played a hack writer in Ealing's Hue & Cry, 1947), while Grenfell is the judge's daughter and army stalwart who is finally running out of patience with the man she has been engaged to for a decade without ever quite managing to drag to the altar. The almost wordless scenes in which a nervous Sim attempts to shoplift from a department store and toss a brick through a display window are masterclasses in expressive acting. The end of the film, however, in which all four characters admit how much they've learned from their experiences (urgh) and then laugh hysterically at the news that their never was any money in the first place because the deceased died flat broke, was very ill-advised. Hearing laughter after an hour and a half of this meandering mess just feels strange and unnerving. 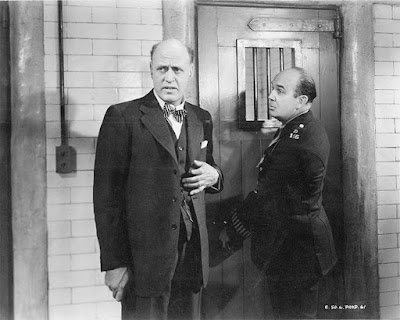 Some points of interest in Laughter In Paradise include another early appearance by Audrey Hepburn (to go with her briefest of turns in The Lavender Hill Mob, 1951), a late one by actor Ernest Thesiger as Endicott, the reader of the will (a thesp whose career high point came in James Whale's Bride Of Frankenstein, 1935), and an all too brief one from Griffith. The Welshman, instantly recognisable from his prominent nose, bushy brows and bulbous eyes, famously played the Lord High Steward in Kind Hearts & Coronets (1949) and Professor Welch in the Boulting Brothers' Lucky Jim (1957) before going on to greater things in America with bit-parts in Ben-Hur (1959) and The Abominable Dr Phibes (1971). John Laurie as the wild-eyed Scots hypochondriac Gordon Webb was a late replacement for Stanley Holloway and his performance is an early variation on his Private Frazer character from Dad's Army (1968-77) while the lively soundtrack comes from Stanley Black, who also scored Zampi's The Naked Truth (1957) and Too Many Crooks (1959) and Charles Crichton's The Battle Of The Sexes (1959). Laughter In Paradise was remade by Duncan Wood in 1970 as Some Will, Some Won't with Ronnie Corbett, Dennis Price, Leslie Philips, Arthur Lowe, Wilfred Brambell and the eternally optimistic Summerfield again. Sim, Cole, Summerfield and Thesiger would find themselves reunited later in 1951 when all four appeared in Brian Desmond Hurst's definitive Dickens adaptation and Christmas favourite, Scrooge.
Posted by Joe at 12:12