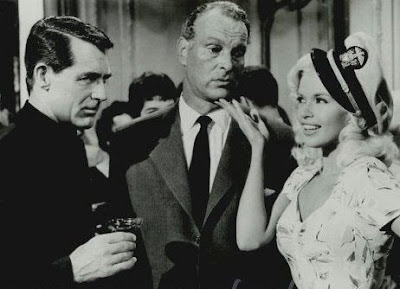 Cary Grant, Lief Erickson and Jayne Mansfield in Stanley Donen's film of Frederic Wakeman's 1944 novel Shore Leave for 20th Century Fox. Previously adapted for Broadway by Luther Davis, Donen's film of the same source is a weird, uneven hybrid of Second World War comedy and issue drama - odd given that the same filmmaker was so comfortable in similar territory when he directed Gene Kelly and Frank Sinatra in On The Town in 1949. The plot concerns three decorated US navy pilots who are granted four days leave from bombing the South Pacific. They shack up in a plush suite in San Francisco's Fairmount Hotel and plan to spend their leisure time chilling out, sipping “Stingers” and scoring big time with any suggestible females who happen to take advantage of their open door policy. However, they've hardly had a chance to plug in the jukebox or make a start on trashing the place before the festivities are interrupted by a fastidious manager, army bureaucrats and the odious Eddie Turnbill (Erickson), a shipyard tycoon who wants the boys to make a series of rousing, morale-boosting speeches to his workers. Southern rube Mississip (Larry Blyden) and aspiring congressman McCann (Ray Walston) are game but Lieutenant Commander Andy Crewson (Grant) is exhausted and jaded with what he regards as cynical propaganda duties and shameless profiteering, preferring instead to pursue Turnbill's elegant fiancée (model Suzy Parker) and give Shore Patrol a run for their money.

Grant's experience shows here and his portrayal of a charismatic born leader suffering under the strains of undiagnosed Post-Traumatic Stress is highly affecting and a skilful variation on his familiar comic persona. His cool performance is one reason to persist with Kiss Them For Me (which must have seemed dated the day it was released) and co-star Jayne Mansfield is another. A one-woman riot with a healthy awareness of her own inherent ridiculousness, Mansfield was the sort of busty blonde starlet who made Marilyn Monroe look quietly understated. Her megawatt sex appeal is particularly well-matched here with Nathaniel Frey's gormless Chief Petty Officer Ruddle. Ever since her tragic demise in a car crash in 1967, this subtlety-free pin-up has remained a cult figure and been made the subject of several musical tributes, particularly in the punk era. Perhaps the most interesting of these is this bhangra-inflected 1991 effort from ageing goths Siouxsie & the Banshees, which takes its title from the Donen film. Somehow it's difficult to imagine the formidable Siouxsie Sioux getting stuck into this confused, late period Cary Grant vehicle with a packet of Digestives and her feet up but I suppose it takes all sorts.