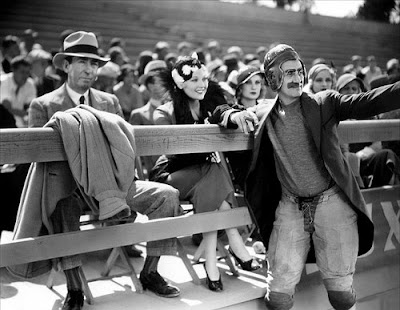 Director Norman Z. McLeod and actress Thelma Todd reunited with the Marx Brothers at Paramount after Monkey Business (1931) for Horse Feathers, their fourth feature, an inspired college football satire that would inspire all other university-set features to follow from A Chump At Oxford (1940) to Animal House (1978). Also returning were writers S.J. Perelman and Will B. Johnstone (a New Yorker wit and a cartoonist respectively) plus song writing duo Bert Kalmar and Harry Ruby, the latter pair contributing perhaps my favourite song of all time from Groucho's inaugural speech, 'Whatever It Is, I'm Against It', an immortal anthem for contrarians everywhere.

As always, Groucho takes the lead, here playing Professor Quincey Adams Wagstaff, the new president of Huxley College, an institution that has failed to win its annual football game against hated rivals Darwin since 1888. On the advice of his student son (Zeppo), Wagstaff heads to the local speakeasy (password: “Swordfish”) to sign up two ringers. Instead, he recruits Baravelli (Chico), an iceman and bootlegger, and Pinky (Harpo), the local dog catcher, by mistake. Wild puns and chicanery ensue, during which the boys attempt to woo Zeppo's cougar beau (Todd), kidnap the real football stars (who are naturally much tougher than Chico and Harpo) and take to the field for one of the greatest sporting scenes in movie history. Harpo tosses banana skins around to slip up would-be tacklers, attaches the ball to his palm with elastic and romps to victory on a horse-drawn dustman's chariot to score the winning touchdown in the final minute. Grid iron has never looked so accessible to an Englishman. As writer Stefan Kanfer explained it, “Here college football is the Brothers' metaphor for American business - the incessant meetings, the hypocritical praise of sportsmanship, contrasted with the vicious attempts to win at any cost.” The match also serves as a parody of formulaic sports melodramas and is, in this respect, several decades ahead of its time.

The scene in which Groucho takes over an anatomy class taught by the bearded Robert Grieg, the butler from Animal Crackers (1930), was derived from an old vaudeville routine the Brothers used to do in the twenties called 'Fun In Hi Skool'. There's a wonderful line when a secretary interrupts Wagstaff's meeting with two academics by declaring, “The Dean is furious! He's waxing wroth!” to which comes the inevitable reply, “Oh, is Roth out there too? Tell Roth to wax the Dean for a while.” Groucho also gets to break the fourth wall and tell the audience during a musical interlude: "I've got to stay here. But there's no reason you folks shouldn't go out into the lobby till this thing blows over." Another fine moment comes when a hobo stops Harpo in the street and asks if he could help him out because he's desperate to get a cup of coffee. Harpo then proceeds to reach into his trouser pocket and produce said steaming cup complete with saucer, which he then hands to the astonished man without spilling a drop. A more problematic scene comes later when Harpo is seen shoveling a whole shelf full of books onto a fire like so much coal into a steam engine's furnace. Some critics have felt this to be an aggressive anti-intellectual statement that has since acquired an unfortunate association with the Nazi book-burnings that took place in Nuremburg four years after Horse Feathers was filmed. I'm not convinced this is really an issue myself as it's as much a part of the Brothers' uncompromising, anarchic brand of anti-authoritarianism as the scene in which Harpo cheeks a traffic cop, tears up his ticket book and then imprisons the bewildered officer inside his dog cart. Whatever it is, they're against it. 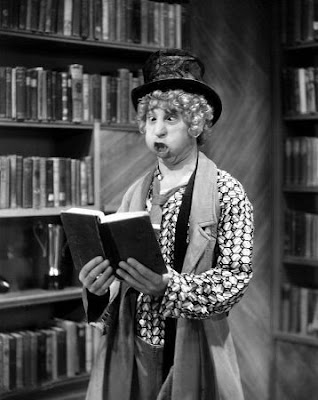 The shooting of Horse Feathers (the title an exclamatory phrase meaning “nonsense” or, not to put too fine a point on it, “bullshit”) was put on hiatus for ten weeks while Chico recovered from injury following a bad car wreck – he eventually had to use a stand-in for some of the more grueling stunts expected of him in the climactic football scenes. Groucho meanwhile fell-out repeatedly with Perelman, who didn't care for his improvising over cherished material and almost drowned Todd during the boating scene (a parody of Theodore Dreiser's novel An American Tragedy, 1925). He mistakenly believed her cries for help were a joke and so paddled off in pursuit of the duck humming 'Everyone Says I Love You' while his non-swimming co-star was being rescued by a team of heroic technicians. Oh and the final scene was supposed to have been the boys playing cards while Huxley College burned to the ground behind them but the Paramount bean-counters thought this would prove too expensive so instead we have the cheaper but more outrageous bigamy ending in which Chico, Groucho and Harpo ALL marry Todd. And for people who like spooky coincidences, Harpo wears the number 75 jersey while playing for Huxley in Horse Feathers - a detail that would prove prophetic when he died at exactly that age in 1964.
Posted by Joe at 14:31