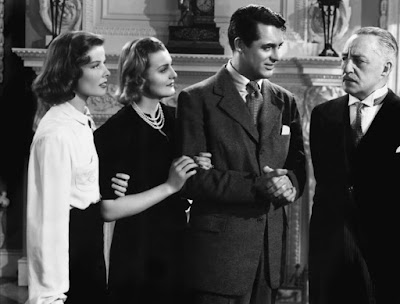 Katharine Hepburn, Doris Nolan, Cary Grant and Henry Kolker in George Cukor's inspired class comedy from 1938, the same year that Hepburn and Grant went wild in Bringing Up Baby. Unlike Hawks' rapid-fire screwball farce, however, Holiday is a less zany and more thoughtful, provocative work that dares question the merits of a life dedicated to the neverending pursuit of wealth and material possessions. Somebody far cleverer than me once suggested that all that distinguishes Shakespeare's comedies from his tragedies is a happy ending and that's certainly the case with Holiday.

As in The Philadelphia Story (1940), Holiday finds the Great Kate and old Archie Leach, “the Man from Dream City” (er, Bristol), tackling high society under the experienced eye of Cukor in a play by Philip Barry adapted for the screen by writer Donald Ogden Stewart (plus Sidney Buchman this time). The story concerns the proposed nuptials between New York banker's daughter Julia Seton (Nolan) and Johnny Case (Grant), an industrious young dreamer with good prospects but few influential friends. At 30 Case is already tired of the rat race, has no particular “reverence for riches” and wants to travel the world in search of adventure and the meaning of it all. This liberating idea hugely appeals to Julia's free-spirited and headstrong sister Linda (Hepburn) but not to the bride herself or their stern Wall Street titan of a father Edward (Kolker). Can Johnny reconcile himself to the life of monied responsibility laid out for him or will he have the courage to break free of social shackles and follow his heart?

Grant's classless misfit in Holiday has been called a “proto-dropout” - his disillusionment, itchy feet and desperation to find out what's on the other side of the hill prefiguring the rebellious instincts of the counter-culture. The painfully conservative Edward Seton feels threatened by Johnny Case's discontent and diagnoses, “a strange new spirit at work in the world today, a spirit of revolt. I don't understand it and I don't like it.” When Johnny tries again to explain his plans in detail to Mr Seton, the old patriarch is horrified and actually labels the young man's doubts and desires “unAmerican,” an early instance of that powerful accusatory word's use a generation before the stranglehold of McCarthyism gripped the States. However, Linda, Johnny and their playroom pals know how to fight fire with fire, gleefully racing around on tricycles, hanging from trapezes, banging on drum kits and greeting their obnoxious cousins the Crams (Binnie Barnes, Henry Daniell) with a fascist salute on New Year's Eve. The same war rages on to this day all over the world. 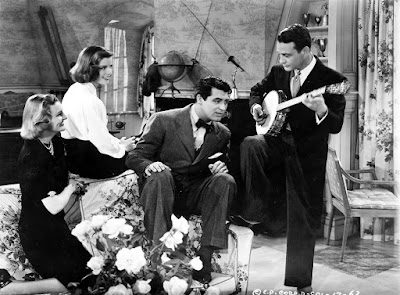 The presence of the amiable Edward Everett Horton among the cast (reprising his supporting role as Columbia Professor Nick Potter from an earlier filmed version of Barry's play from 1930, which starred Ann Harding, Mary Astor and Robert Ames), helps set the tone. Horton was of course a regular in the Fred Astaire-Ginger Rogers films for RKO in the thirties, a series in which the leading man delighted in gently exposing and ridiculing upper-crust pretensions, elitism and snobbery. In spite of his top hat, white tie and tails, Astaire was an Everyman figure with whom audiences could identify and that's very much the angle Grant goes for here. Performing some of the acrobatic tricks and flips with which he began his career in a travelling stage troupe, entering via the servant's quarters, wearing his hair in a messy style and mocking the sheer size of the Seton's palatial Fifth Avenue town house, Johnny Case is “a plain man of the people” who tries to bring a sense of fun into their stuffy lives (something apparently lacking since the death of the creative, supportive Mrs Seton some years before). However, despite its good humour neither film version of Holiday was a box office hit. The play had only just completed its debut run on Broadway when the stock market crashed in 1929 while the plot relies on Johnny's deft handling of stocks and shares. It's possible that Depression audiences felt little sympathy for a protagonist prepared to throw away his comfortable existence so impulsively.

Nevertheless, the cast are all magnificent, especially the vital, childlike Hepburn. Horton and Jean Dixon are lovely as the cheerily grounded Potters (or is that Porters?) and Lew Ayers is heartbreaking as Ned, the frustrated musician and lush younger brother of the family (the actor retaining the same haunted look he brought to Lewis Milestone's epic All Quiet on the Western Front, 1930). Grant said working with Hepburn was “a joy” while she praised his “wonderful laugh.” What a love-in. Without Grant ending up with the right sister though, Holiday might have been one of the saddest weepies ever made.
Posted by Joe at 14:58