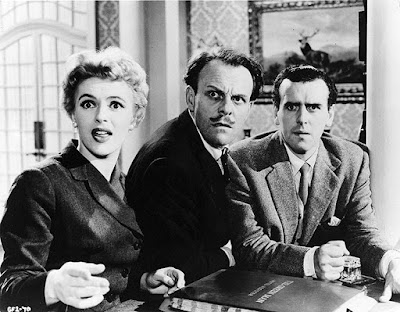 Jill Adams, Terry-Thomas and George Cole causing havoc at the front desk of the Green Man hotel in Newcliff where they believe Alastair Sim's hitman Harry Hawkins has planted a bomb for the benefit of pompous, philandering MP Sir Gregory Upshott (Raymond Huntley). One of many enjoyable British Lion collaborations between the production team of Sidney Gilliat and Frank Launder and star Sim, The Green Man was based on the film-makers' stage play Meet A Body (1955) and marked the directorial debut of cameraman Robert Day - the latter receiving uncredited assistance from the more experienced Basil Dearden, who had worked at Ealing on a string of old Will Hays comedies and, perhaps more notably, on The Captive Heart (1946) and The Blue Lamp (1950).

The Green Man opens with a wonderful voiceover from Sim and a flashback to his school days in which he explains how a prank involving an electrically-charged pen and ink well backfired on a cruel headmaster with fatal results and led to Hawkins beginning his career in professional assassination. We see him on various assignments from his glory days, apparently targeting only arrogant and deserving bigwigs ("those overblown balloons who just cry out to be popped"), including one in which he rubs out a Latin American dictator visiting a football stadium by placing a ticking explosive inside the match ball. Fabulous.

Now in semi-retirement, living the sedate life of a watchmaker in Turnham Green, Hawkins has nevertheless been buttering up Ms. Marigold (Avril Angers), secretary to Cabinet minister Upshott, in order to learn the politician's movements on a particular evening so that he can whack him on behalf of a shady Middle Eastern syndicate. His meticulous plans begin to unravel, however, when Marigold becomes suspicious and insists on seeing Hawkins in person for an explanation – a demand complicated by its coinciding with his regular Friday afternoon chess game with local policeman Sergeant Bassett (Cyril Chamberlain). Thinking quickly, Hawkins dispatches his assistant Angus McKechnie (John Chandos) to switch the name plaque on his house, “Windyridge”, with that of his neighbours, “Appleby”, so that Marigold will be diverted to the wrong residence where she can be disposed of by McKechnie. A farce ensues involving a body in a piano, a gauche vacuum cleaner salesman (Cole), the girl next door (Adams) and her stuffy radio announcer fiancé (Colin Gordon, who previously appeared with Sim, again as a BBC employee, in Folly To Be Wise, 1953). Can these muddled amateurs work out what's going on and get to the south coast in time to thwart Hawkins before he can blast Upshott? The clock is ticking...

On seeing The Green Man, Pauline Kael wrote of Sim that, "It is unlikely that anybody in the history of the cinema has ever matched his peculiar feat of flipping expressions from benign innocence to blood-curdling menace in one devastating instant.” A scene in which he flatters a trio of spinster musicians, pretending to be transported into throes of ecstasy by their playing in a bid to hurry them out of the hotel's drawing room so that he can execute his plan, is a great case in point. T-T, as always, provides some stiff competition in the scene stealing stakes, however, and said of his lugubrious co-star, "You never knew exactly what he was going to do and neither, I felt, did he!" Cole and Adams are also very charming as the panicky suburbanites out of their depth on the killer's trail - she in particular deserving credit for being so game, imitating Marilyn Monroe and being required at one point to strip to her underwear to provide an ill-justified dash of minor titillation. Something for the chaps, what what?! It's clumsily handled and very Fifties. 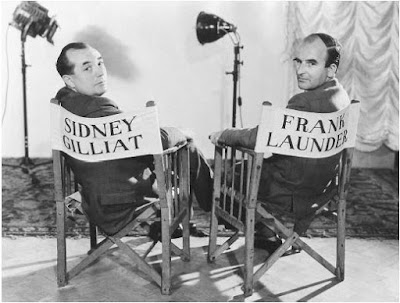 Harry Hawkins may find himself behind bars at the film's close, but Gilliat and Launder clearly expect us to side with this eccentric murderer rather than the preposterous posers on the right side of the law he makes a living doing away with. That might sound subversive but think of Kind Hearts & Coronets (1949) and given the choice between Hawkins and the impatient, authoritarian snob Sir Gregory, it seems only natural to favour the former. The nervous girl the Honourable Member is attempting to lead astray, incidentally, was played by Eileen Moore, Cole's then-wife, while Arthur Lowe also has a small but crucial cameo as a radio salesman.
Posted by Joe at 12:55