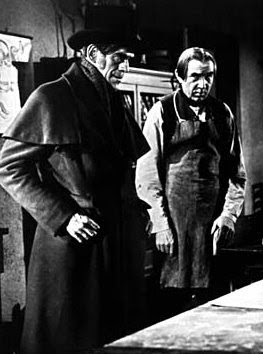 Here's another great pairing of two beloved screen horrors: Boris Karloff and Bela Lugosi in a nice adaptation of Robert Louis Stevenson's 1884 short story 'The Body Snatcher' for RKO. The ghoulish duo actually appeared together eight times, this being the last, so they can't have been too unfriendly in spite of Martin Landau's line in Ed Wood (1994), when his Lugosi reacts angrily to being referred to as Karloff's sidekick: "Karloff? Sidekick? Fuck you! Karloff did not deserve to smell my shit! That limey cocksucker can rot in hell for all I care!" The real Lugosi would later claim that he'd scouted Karloff for his breakthrough role at Universal, playing the monster in Frankenstein (1931), but how true that is remains obscure. You can read an authoritive account of the two fiends' intertwined careers here.

Their final film together was directed by Robert Wise for producer Val Lewton and tells the story of an Edinburgh doctor, the pragmatic Wolfe MacFarlane (Henry Daniell), who in 1831 employs a sinister local cab driver, John Gray (Karloff), to acquire cadavers for his medical students to dissect (before the Houses of Parliament passed the Anatomy Act in 1832, only the corpses of executed felons could legally be used for scientific experimentation). When MacFarlane's protégé Donald Fettes (Russell Wade) discovers that Gray has begun murdering people to order rather than simply exhuming old graves, they realise their £10 "ressurrection man" is out of control and must be stopped.

Karloff is on rollicking form as the smirking cabby who dogs the good doctor's every step, a sort of evil doppelgänger in the manner of Stevenson's Mr Hyde. My old university lecturer, a Scot, referred to this recurring literary device in the fiction of his nation as the "Caledonian antisyzygy", a fundamental schism at the core of the Scottish soul, a national schizophrenia derived from its people thinking Celtic thoughts but having to express them in English and from the nation's tumultuous ecclesiastical and political history - a long war of competing opposites. The battle between temptation and guilt, past and present, is there in the shadowing of Dr MacFarlane by Gray and in the split personality of Henry Jekyll and provides the core of James Hogg's novel The Private Memoirs & Confessions Of A Justified Sinner (1824). Stevenson became interested in this dichotomy theme, most perfectly expressed in The Strange Case Of Dr Jekyll & Mr Hyde (1886), after hearing the tale of Deacon Brodie (1741-88), a respected Edinburgh cabinet-maker, trade guilds stalwart and city councillor who pursued a life of crime after dark, stalking the foggy sidestreets of the capital by night to rob and steal for the sheer thrill of it. Stevenson's own father even owned furniture made by the hand of William Brodie, whose trial and hanging scandalised the city.

The sickly author also made use of a true crime case in writing 'The Body Snatcher', that of the West Port murders of 1828, carried out by Irish labourers William Burke and William Hare, who began killing lodging-house tenants in order to supply bodies to Edinburgh Medical College lecturer Dr Robert Knox. When they were finally caught and arrested, Hare was persuaded to testify against Burke, who was hung and, ironically, ended up on the slab at one of Knox's anatomy classes. Hare was released from custody in February 1829 and later disappeared while the furore over the crimes increased pressure on Parliament to legalise the donation of corpses for academic study. The character of Dr MacFarlane in the story is said to have been a favourite pupil of Knox while Lewton and Philip MacDonald's script also makes use of another popular historical figure of the period, Greyfriars Bobby, a terrier so faithful that he is said to have kept vigil over his late master's grave for 14 years after the funeral. The dead man's name, incidentally, just so happened to be John Gray. 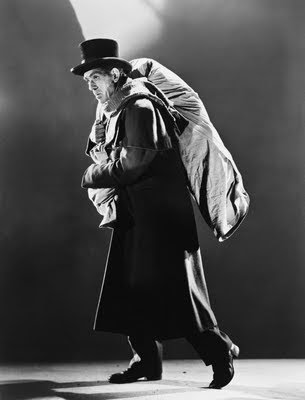 As for The Body Snatcher itself, it's a solid piece of work that recreates a gloomy Edinburgh well enough with limited resources and benefits from excellent performances by Karloff and Daniell, the latter dubbed by Time Out, "Hollywood's greatest sourpuss." Lugosi is sadly reduced to playing a Portugese servant who unwisely attempts to blackmail Gray and ends up being suffocated after a brawl. Wise later admitted that the role had been shoe-horned in to accommodate the fading star and would simply have been cut altogether had Lugosi not been available. Elsewhere, American actor Wade just gives up on a Scottish accent altogether after an early embarrassment when he completely mangles the pronounciation of "Edinborrow" but otherwise proves a fine hero. Highlights include the dramatic carriage chase through the rain, which makes for an exhilarating climax after the slow building of atmosphere beforehand and the snuffing out of the street singer mid-ballad, which is suitably abrupt.
Posted by Joe at 09:43