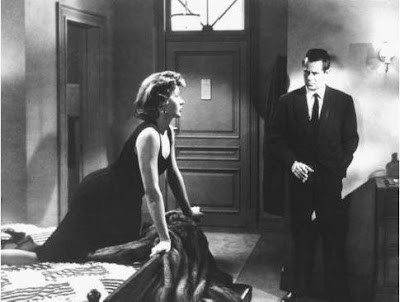 You know instantly that any film that opens with a close-up of a .38 revolver isn't going to end well and The Big Heat doesn't. A cop reaches for the gun and blows his brains out seconds later.

Sergeant Dave Bannion (Glenn Ford) is assigned to investigate this suicide and suspects the dead man's widow, Bertha Duncan (Jeanette Nolan), of suppressing a note. Bannion meets with the late Officer Duncan's mistress Lucy Chapman (Dorothy Green), only to learn that she's been bumped off soon after. Warned off pursuing the matter further by the corrupt and compromised men upstairs, Bannion believes local mob boss Mike Lagana (Alexander Scourby) is the cause of it all and confronts him at home. Soon afterwards Bannion begins to receive death threats but ignores them for the sake of the case. Finally Bannion's world is shattered when his loving Stepford wife Katie (Jocelyn Brando, Marlon's older sister) is killed by a car bomb that was meant for him. Distraught, Bannion insults his smug and cowardly superiors and turns in his badge, preferring to go it alone rather than work within the confines of a system he considers terminally corrupt. Now a civilian avenger on a “hate binge”, Bannion encounters Debby Marsh (Gloria Grahame), moll to Lagana's sadistic henchman Vince Stone (Lee Marvin), who feels sorry for him and appreciates his saving a dice girl from Stone's cigar burns. However, their friendship means a cruel and unusual punishment for Debby before Bannion can finally nail Stone and Lagana for good.

Fritz Lang's film was adapted for the screen by former crime reporter Sidney Boehm from a Saturday Evening Post serial and novel by William P. McGivern. It's a great fit for Lang, who gets to explore a favourite theme – the thin line, easily blurred, between cops and crooks, good and evil. The Big Heat presents a nightmare world of brutal violence in which the fictional town of Kenport is ruled by an all-powerful crime syndicate whose members spend their leisure hours lounging around a poker table alongside police commissioners, city councillors and judges. Homicide detective Bannion's only isle of solitude from the sea of vice all around him is his perfect fifties home – a domestic idyll where his cute daughter Joyce (Linda Bennett) is free to build block castles while he and his resourceful wife share sips of beer and fried steak. The intrusion into this suburban paradise – first by an obscene phone call and then by the fatal bomb – is too much to bear. These three little kittens lose a great deal more than their mittens and it's this devastating tragedy that causes Bannion to snap and ignore his colleague's warning that, “No man's an island Dave. You can't set yourself against the world and get away with it.” He removes himself from society to stalk the night as a trenchcoated vigilante, only to find, much to his surprise, that there are a few good people he can depend on after all – folk like Debby Marsh, the crippled lady at the wrecking yard, Lieutenant Wilkes (Willis Bouchey) and his brother-in-law's old army buddies. Lang told an interviewer in March 1953 that he considered Bannion, “a symbol of hope in these days of taxes, insecurity and the H-bomb,” and perhaps this is why. He is not only incorruptible himself but his cause sparks the community into action against the hoods and crime lords.

The coffee scalding scene above is rightly remembered as the most shocking act of violence against a woman on the American screen since Cagney mashed a grapefruit into Mae Clarke's face in The Public Enemy (1931). However, it is only one of several such cruelties against females in The Big Heat, the others being the murders of Lucy Chapman and Katie Bannion and Vince Stone's bullying of the croupier girl. Women in Boehm's script are either maternal saints like Katie or fallen sinners like Lucy or the blackmailing Mrs Duncan. Debby Marsh must die to earn her revenge against Vince Stone and does just that, her hideous scars temporarily concealed by a mink collar as she hits the ground shot – a Two-Face redeemed. Another female presence in the film is that of Lagana's mother – an austere portrait of whom hangs in his office, looking down on her son's shady deals with an approving eye. His admiration for this “great lady” and his first appearance, in which a henchman in a flannel bath robe and silk pyjamas lights him a cigarette in bed, make less than subtle suggestions about Lagana's “aberrant” sexuality. A touch of homophobic propaganda there - if you want to lead a good, clean American life, don't get into organised crime. Those boys get up to all kinds of nonsense.

Ford and Grahame would be reunited in Lang's next feature, Human Desire (1954), an adaptation of Émile Zola's novel La Bête Humaine (1890), previously filmed by Jean Renoir in 1938 starring Jean Gabin.