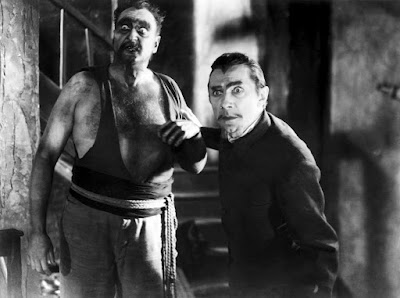 Bela Lugosi - a year after spooking audiences with his signature role - gets to do a variation on the Drac act all over again in White Zombie, this time as a black magic sorcerer. This murky little horror from brothers Victor and Edward Halperin, who directed and produced respectively, is generally thought to be the first zombie movie proper and leaves viewers with an invaluable life lesson: never trust a man whose first name is "Murder".

White Zombie concerns innocents abroad Neil Parker (John Harron) and Madeliene Short (Madge Bellamy), an American couple who visit Haiti in order to get married. There they meet plantation owner Charles Beaumont (Robert Frazer) who falls in love with Madeliene and enlists local weirdo Murder Legendre (Lugosi) to perform a spell on her. Naturally, this Satanic fiend with spit-curled eyebrows has other ideas. He persuades Beaumont that Madeliene needs to die and be resurrected before she can become his - only then will he be able to control her revenant form using a voodoo doll carved out of a wax candle. Can Neil and kindly missionary Dr Bruner (Joseph Cawthorn) save the girl from "sins that even the devil would be ashamed of" before it's too late... ?!

White Zombie's story lazily appropriates more than a few ideas from Bram Stoker's Dracula (1897). Swapping Transylvania for the West Indies, the young hero is very much a naive, Jonathan Harker type while Dr Bruner recalls Professor Van Helsing, explaining the supernatural to the lad in a non-specific Euro accent. This figures, as the production was shot on the Universal lot (though financed independently), recycling old sets from Tod Browning's Dracula plus The Hunchback Of Notre Dame (1923), The Cat & The Canary (1927) and Frankenstein (1931), in a bid to cash-in quickly on Lugosi's rising star. The latter is naturally the best thing in White Zombie, his fixed stare and mysterious, double-jointed hand clasp somehow very eerie and threatening. Staging this zombie schlocker in its traditional homeland, the superstitious backwaters of the Caribbean, makes for a very original and evocative setting, a world away from the clichéd gothic castles and pine forests of Eastern Europe. OK, so Legendre's clifftop lair is a little too lavish but the island is otherwise no tropical paradise - pitched in darkness, its palm trees drooping ominously, its hillsides dotted with headstones, its skies haunted by the hysterical screeching of vultures.

The scene at Legendre's sugar mill - staffed by the undead because they provide a cheap source of non-unionised labour who "work faithfully" and "are not worried about long hours" - must be every middle-manager's wet dream. A cinematic satire of the deadening effects of industrial capitalism on the workforce before Modern Times (1936) and George A. Romero? Perhaps not. Some of the acting is a tad hammy, it has to be said, the cast mainly comprised of faded actors from the silent era, unused to the subtleties of spoken dialogue, who tend to make heavy use of the significant dramatic pause: "Dr Bruner is a trifle sceptical as to your... motives, sir." One contemporary British reviewer of White Zombie, writing in The Kinematograph Weekly, warned that it was, "not for the squeamish or the highly intelligent." Too cruel. Time Out's Paul Taylor was kinder more recently, arguing that this "poetic" film is deliberately shot to evoke the dreamlike state of a trance, "insinuating ideas and images of possession, defloration and necrophilia into a perfectly stylised design, with the atmospherics conjuring echoes of countless resonant fairytales." Either way, the Halperins were not to be deterred from making a sequel four years later, Revolt Of The Zombies, this time set in Cambodia just after WWI without Lugosi, only using the recurring image of his hypnotic eyes to suggest evil doings about to go down.