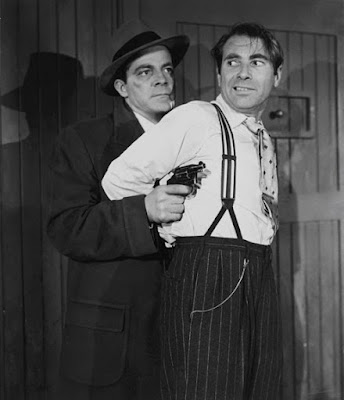 "That's a fancy way of trying to frame somebody - getting yourself knocked off. A guy's gotta be outta his head for that. I didn't know a guy could hate that much. Not even you."

So says gangster Tommy Scalise (Gary Merrill) of Detective-Sergeant Mark Dixon (Dana Andrews) in Otto Preminger's Where The Sidewalk Ends, a violent, Freudian noir adapted from the William L. Stuart novel Night Cry (1948) by Ben Hecht, Victor Trivas, Robert E. Kent and Frank P. Rosenberg. Dixon is a sadist with a death wish who takes out his oedipal anger on those hoods who make the mistake of crossing his path in an urban jungle of neon lights, dead ends and moral turpitude. Dixon's late father, Sonny, was a New York mob man and an associate of Scalise, so the cop's pursuit of the latter is very much a personal vendetta against an unwanted surrogate brother, his childhood rival for pop's affections. Every punch he lands along the way is a swing at a daddy who never loved him, a hated figure he has grown up trying to define himself in opposition to. This brutal, haunted knight roaming the beat is what noir is all about. 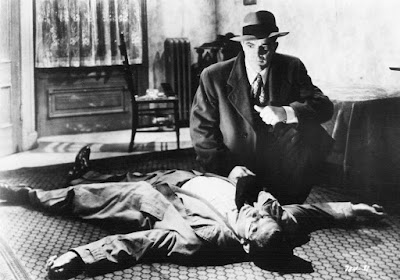 When Dixon accidentally kills low-rent hustler Ken Paine (Craig Stevens), a patched-up war veteran with a plate in his head, he panics and covers up the manslaughter to conceal it from the 16th Precinct's newly-promoted and very keen Detective-Lieutenant Thomas (Karl Malden). However, fate conspires against Dixon when Paine's death is pinned on Jiggs Taylor (Tom Tully), a taxi driver and father of the dead man's estranged wife Morgan (Gene Tierney), whom Dixon has understandably fallen in love with over the course of the investigation. The cop would prefer to bring Scalise in instead and tries to contrive circumstances accordingly rather than admit the inconvenient truth.

This is one psycho noir that Alfred Hitchcock would surely have lapped up. From the suspense created by having an elderly neighbour sitting at the window to watch the comings-and-goings from Paine's apartment to the wrong man plot twist and the black humour of Andrews' fumbling with a corpse à la The Trouble With Harry (1955), this is Hitch all over. The murky morals of Dixon's behaviour are deliciously complex and Hecht's script tries hard to make us side with an unhinged vigilante who hides behind his badge and abuses his authority. Only his banter with ageing waitress Martha (Ruth Donnelly), affection for his shlub of a partner (Bert Freed) and attraction to Morgan humanise this most obsessive and twisted of beasts. Bad cops are still doing a roaring trade at the box office in the wake of Training Day (2001), with the twin recent successes of Werner Herzog's Bad Lieutenant remake and Casey Affleck's masterful turn as Lou Ford in The Killer Inside Me (both 2010). Mark Dixon deserves to be remembered in their company, along with Dirty Harry and Hank Quinlan from Touch Of Evil (1958). Dixon is also a sort of murderous mirror-image of Mark McPherson in Preminger's earlier Laura (1944). What a fine and underrated actor Dana Andrews was - so sparing, so understated.

Arguably Where The Sidewalk Ends is marred slightly by its unnecessarily wholesome happy ending, which contradicts its otherwise hard-fought ambiguity. Rather than have Dixon insist that the paternal Inspector Foley (Robert F. Simon) read his confession in a fit of guilt and then be forgiven by Tierney, I'd have had Foley toss it unread into the nearest waste-paper basket for a close-up, after which the music would swell, "The End" would rear up on screen and the characters would leave the room patting an uneasy Andrews on the back. But what do I know?
Posted by Joe at 13:45