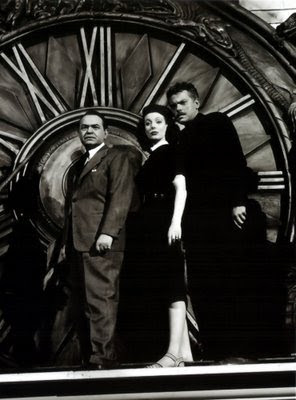 "There is no den in the world wide enough to hide a rogue. Commit a crime and the earth is made of glass. Commit a crime and it seems as if a coat of snow fell on the ground, such as reveals in the woods the track of every partridge and fox and squirrel and mole. You cannot recall the spoken word, you cannot wipe out the foot-track, you cannot draw up the ladder."
- Ralph Waldo Emerson, 'Compensation' from Essays (1841)

Orson Welles showed that he could play by a producer's rules and turn a profit when it suited him with this gripping if conventional post-war noir thriller, his third director's credit and least favourite among his own work. Welles stars as Nazi fugitive Franz Kindler, one of the architects of the Holocaust who is now lying low in small-town Harper, Connecticut, teaching "the sons of America's first families" under the name Charles Rankin and relishing the irony of his position and forthcoming marriage to Mary Longstreet (Loretta Young), daughter to a Supreme Court justice (Philip Merivale). Little does Kindler realise that Agent Wilson (Edward G. Robinson) of the Allied War Crimes Commission is in town and on the trail of his old colleague Konrad Meinike (Konstantin Shayne), a religious convert whom Wilson has released in the hope that he will lead him straight to Kindler. 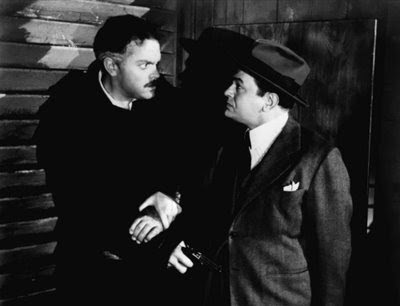 By the forties, Edward G. had begun to do very well for himself playing methodical little men on the right side of the law - here a pipe-tapping Simon Wiesenthal type - having made his name as Rico "Little Caesar" Bandello at Warners (James Cagney too would undergo a similar post-Code moral makeover, going from glamorous hood in The Public Enemy of 1931 to a heroic Fed four years later in G-Men). Robinson's Mr Wilson coolly makes known his presence in Harper by insinuating himself into the dinner party set, befriending the Longstreets and taking in the occasional game of checkers at the general store with 25 cent hustler and local busybody Mr Potter (Billy House, physically resembling Lionel Barrymore's miserly Bedford Falls villain of the same name in the same year's It's A Wonderful Life). Wilson is just as much a stranger in these parts as his prey and the town - its incongruous Gothic clock tower aside - comes to represent the sort of Rockwellian, all-American suburban heartland of white picket fences, well-to-do homes and gently tumbling autumn leaves that Welles's friend Joseph Cotten so gleefully picked apart in Shadow Of A Doubt (1943) or that the gas-guzzling Dennis Hopper haunted so menacingly in Blue Velvet (1986). Beneath its green lawns lies a thick, lingering morass of paranoia and mistrust. In spite of Mary's denial and insistence to the contrary that, "In Harper, there's nothing to be afraid of", a very real fear of intruders infiltrating the community abides. At her own cocktail party, this sickly mood bubbles to the surface when the guests become excited by ghoulish talk of serial killers and the fate of Meinike, the missing stranger. McCarthy's Red Scare was just around the corner.


Welles's direction is certainly more self-consciously routine than usual but he still finds interesting things for cinematographer Russell Metty to do by way of looming silhouettes and claustrophobic close-ups. A pounding, melodramatic score by Bronislaw Kaper serves to compliment the action and ratchets up the tension at key moments, as when Kindler strangles Meinike in a dappled woodland while local school boys follow a paperchase close by. As an actor, Welles mostly steers clear of Nazi stereotype and is all the more unnerving for it - his Kindler is the sort of fellow who quietly poisons dogs, whistles while doodling swastikas in public phone booths and ducks out of his own wedding reception to bury a corpse, returning in a change of clothes looking suaver than ever. He longs for World War III and The Stranger is deadly serious about the threat still posed by surviving fascists, even going so far as to feature a scene in which Wilson forces Mary to watch real news reel footage of a concentration camp to convince her to accept the facts and turn on her husband.

This was a theme Welles dealt with regularly in his contemporary newspaper column for The New York Post, never forgiving the German people for embracing National Socialism and attributing the rise of Hitler to their "infatuation with Faust", a stance at odds with his usual libertarian political outlook. His attitude had not changed by 1950, when he was interviewed about the commercial failure of Macbeth (1948) by Sight & Sound's Francis Koval: "I don't take it as a compliment that the picture is having terrific success in Germany, where people are probably attracted to the medieval savagery of the subject," he speculated. The following speech over dinner in The Stranger, when Charles Rankin inadvertently reveals himself to Wilson, summarises Welles' view of the Nazi mentality and provides an especially chilling moment:

"The German sees himself as the innocent victim of world hatred and conspired against and put upon by inferior people, inferior nations. He cannot admit to error, much less to wrongdoing, not the German. We chose to ignore Ethiopia and Spain, but we learned from our own casualty list the price of looking the other way. Men of truth everwhere have come to know for whom the bell tolled, but not the German. No. He still follows his warrior gods marching to Wagnerian strains, his eyes still fixed upon the fiery sword of Siegfried, and he knows subterranean meeting places that you don't believe in. The German's unbroken dream world comes alive and he takes his place in shining armour beneath the banners of the Teutonic knights. Mankind is waiting for the Messiah, but for the German, the Messiah is not the Prince of Peace. He's... another Barbarossa... another Hitler."

The Stranger's story came from an original screenplay written by Victor Trivas, which was worked on by Anthony Veiller and Decla Dunning as well as an uncredited Welles with help from John Huston. Despite his input, Welles still considered the final shooting script to be a "bastardised" version of the original draft and, according to author Clinton Heylin, the director "felt he had been obliged to grit his teeth one time too many, as he again saw plotlines left trailing, themes half-expressed, subtleties sacrificed for a peculiarly subjective, only nominally consistent paciness, indicative of the kind of ur-thriller The Stranger was not meant to be."

Welles had wanted to cast his old Mercury Theater pal Agnes Moorhead in the Robinson role and to feature a more specific explanation of Kindler's obsession with clocks and their mechanisms as a metaphor the "ideal social system", but he was thwarted on both counts. These disappointments were ultimately what led him to declare in 1958 that the finished Stranger is, "the one of my films of which I am least the author." Perhaps but, for me, The Stranger is a distinctive, sorely underrated thriller, packed with ideas and deserving of better, not least for its unforgettable clock tower dénouement, which serves as an odd, noirish link between Harold Lloyd and Back To The Future (1985). As The Stranger has fallen into the public domain, you can see it in its entirety above.
Posted by Joe at 15:32