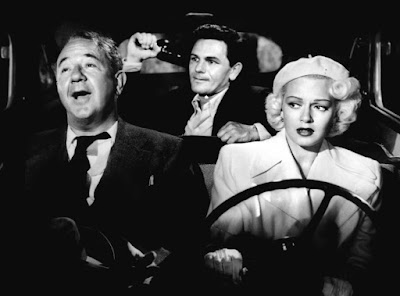 Pulp novelist James M. Cain was so pleased with Lana Turner's performance as Cora Smith in the Tay Garnett, MGM version of his 1934 novel The Postman Always Rings Twice that he gave her a leather-bound first edition inscribed with a loving tribute: "For my dear Lana, thank you for giving a performance that was even finer than I expected." Turner later said that it was her favourite role and she certainly seized the opportunity to prove herself a fine actress as well as a star. Her entrance here - a lipstick rolls across the floor of a roadside lunchroom, drifter Frank Chambers (John Garfield) stoops to pick it up and finds his eyes travelling up the shapeliest pair of legs you ever saw - may even have the beating of Barbara Stanwyck and her anklet in Billy Wilder's Double Indemnity (1944), another Cain adaptation. Chambers doesn't have a prayer against this death trap in white, whose short shorts are so short the very sight of them causes hamburgers to catch fire. Chambers sympathises - he's dead meat too. Cora means the end for him and vice versa. He'll fry for loving another man's wife and knows it but is powerless to save himself from the inevitable. 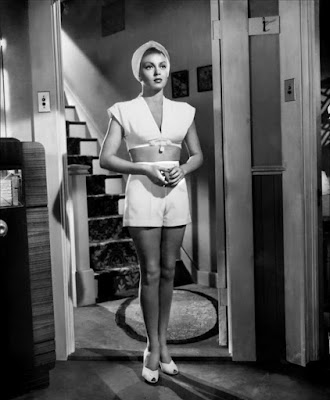 Luchino Visconti got there first with an unofficial adaptation of Cain's work in 1943, Ossessione, which he had first discovered through a French translation given to him by Jean Renoir. The Italian's debut was banned by Mussolini's government and MGM later tried to block its distribution outside of Italy because of copyright infringement. The gritty social realism of the novel would have appealed to Visconti at the time though the story is as universal as they come: man falls for married woman, conspires to bump off her husband, pair turn on each other when the vultures begin to circle and everyone ends up dead.

Tay Garnett's film could hardly be considered a remake of Ossessione but it's certainly a faithful rendering of Cain's yarn, the few minor changes it does make actually improving on the source. Perhaps the most significant alterations in Harry Ruskin and Niven Busch's screenplay concern race. In Cain's story of two souls at odds with the universe - whose murder of the man that stands between them is a desperate bid for freedom from the suffocating constraints of sublunary existence - Nick, the husband, here played by Cecil Kellaway, is a Greek immigrant with the surname Papadakis. His obvious pride in living out his conception of the American Dream beside a California highway is poignant and sad and, in spite of his constant singing and taste for sweet wine, he is a less buffoonish innocent than Kellaway's Nick Smith in Garnett's film.

Similarly, in Cain's hands Cora is an Iowa farm girl gone West, who has dark hair and is touchy about her "Mex" looks. Cora Papadakis also seems to have a deep-rooted racist horror of the man she married, whom she considers "greasy" and only wed to escape a dreary life working in cheap Hollywood hash houses. The idea that he might want to have children with her is so sickening to Cora that she considers suicide and it's this repulsion that ultimately provides the impetus for the lovers' putting their fake drink-driving smash into action. The film has a better idea here, with the innovation that Nick is preparing to sell the Twin Oaks diner and gas station and move up to Canada so that Cora can nurse his disabled sister - this thoroughly unattractive proposition providing a more urgent and compelling deadline for her to commit murder. Hume Cronyn's lawyer, Arthur Keats, is also rechristened after being called "Katz" in the book, a typically Jewish name but also a pun on "cats" - felines recurring symbolically throughout Cain's narrative, from the one that aborts the first attempt on Nick's life by getting itself grilled on the fusebox to Cora's insistence that she needs to act like a "hell cat" just once in her life to cut loose from her husband. The woman Frank later has a fling with, Madge Kramer, also trains the big game variety for a living and gives him a puma kitten as a gift.

Frank is significantly younger than Garfield in the novel, 24, a hobo with muscles honed by "socking railroad detectives" who is in thrawl to the road and the myths it fosters. District Attorney Kyle Sackett (Leon Ames), who along with Keats seems more interested in the intellectual sport of his profession than dealing in justice, gets a more prominent role in this version. It is he who picks up Frank as a hitchhiker and drops him at the Twin Oaks in the first place. He seems to haunt Frank and Cora from that moment on. Cora's entrepreneurial ambition for Nick's business is also made apparent much earlier in Garnett's film, which helps flesh out the character, her determination to achieve commercial success speaks volumes about the lasting scars left by the Depression on the national psyche. Finally, this Postman was obviously not at liberty to dramatise some of the novel's more explicit sexual content (the couple are already pawing each other and biting bloodied lips by page nine and later have passionate sex at the crash site halfway down the ravine: "I had to have her, if I hung for it") but does retain its sudden spasms of violence. Kennedy (Alan Reed), the crooked gumshoe blackmailer, may not have his face beaten to "raw beef", as Cain has it, but Garfield certainly spreads the blood around and to the evident erotic thrill of Turner. Bob Rafelson's 1981 remake, starring Jack Nicholson and Jessica Lange, famously restored Cain's raunch. 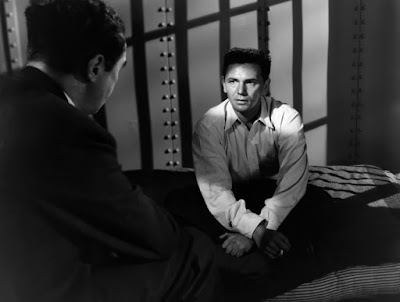 Interestingly, there's no explanation or even allusion to the title anywhere in the original text of The Postman Always Rings Twice. The 1946 film's interpretation of its meaning, given by Frank at the end, is that fate is ultimately inescapable: you might manage to evade it once by luck but, rest assured, you'll get what's coming to you in the end. The phrase is said to have cropped up in a conversation between Cain and screenwriter Vincent Lawrence. Garnett and company took their spin on it from Roy Hoopes' biography of the author. 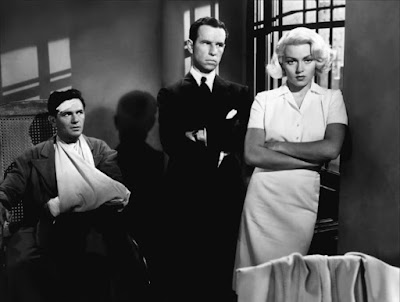 Turner and Garfield make a winning team and the intimacy of the nightswimming scenes at the beach apparently prompted a short-lived real-life romance between the two. Both reprised their roles for a Screen Guild Theater radio dramatisation, broadcast on 16 June 1947 (episode number 311), which managed to condense the plot into a sweet half hour. You can listen to it here. Meanwhile, here's a sharp parody of the movie starring Groucho Marx, Dinah Shore and announcer Harry Von Zell from a 1946 episode of the Bird's Eye Open House that manages to crack through it in even better time, both men ending up dead in a little under 10 minutes.